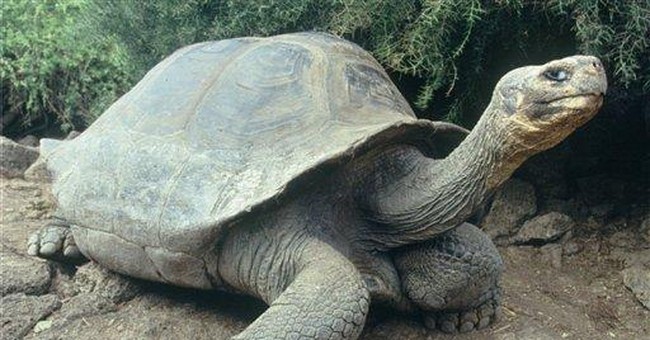 A misleading recent headline in the New York Times demonstrated the way that the left abuses the language to cement its continued control of our public discourse.

Under the banner “EVOLUTION OPPONENT IS IN LINE FOR SCHOOLS POST” reporter Cornelia Dean declared: “The National Association of State Boards of Education will elect officers in July, and for one office, president-elect, there is only one candidate: a member of the Kansas school board who supported its efforts against the teaching of evolution.”

The headline and the lead sentence conjure up the image of a prairie populist, perhaps bearing pitchfork and clad in Bib overalls, denying the existence of dinosaurs and opposing any suggestion that the work of creation required more than six literal days. The sophisticates who read America’s Journal of Record no doubt scanned this alarming article with considerable head-shaking and tsk-tsking at the knuckle-dragging yahoos who populate Red State flyover country.

If anyone bothered to read the article in its entirety, however, they ultimately would discover that Kenneth R. Willard, the school official in question, in no way qualified as “an evolution opponent.”

During his service on the Kansas school board he and his conservative colleagues merely fought “to change the state’s science standards to allow inclusion of intelligent design” by local school districts. Voters later rejected the conservative majority, but neither Mr. Willard nor the other members of his faction ever attempted to block schools or school districts from educating students about Darwinism. Contrary to the newspaper’s alarming report, they in no way launched “efforts against the teaching of evolution.”

As he explained later in the same article, the embattled candidate for president of the National Association of State Boards of Education merely “thought students should be taught about challenges to the theory of evolution, like intelligent design…‘Some people are mindless about their attacks on anyone questioning anything Darwin might have said.’”

The use of loaded phrases like “evolution opponent” and “efforts against the teaching of evolution” deliberately conjure up scary images of the Scopes Trial, “Inherit the Wind,” and religious fanatics who want to keep young minds ignorant and pliable. The Scopes controversy of 1924 actually involved a government ban on any mention of evolution in the classroom; ironically, liberals today desire a government ban on any questioning of evolution in the classroom. It’s leftists, not conservatives, who mirror the Tennessee fundamentalists of eighty years ago by attempting to stifle a teacher’s freedom of speech.

The deployment of explosive and dishonest language has become an increasingly common tactic in today’s most polarizing cultural and political battles.

Whenever conservatives work for state or federal constitutional amendments to reinforce the existing definition of male-female marriage, for instance, leading newspapers and TV networks describe such efforts as “gay marriage bans.” A simple declaration affirming marriage as “a union between one man and one woman” bans no private behavior whatever, but rather underlines the policy under which government grants its strongest endorsement to one specific type of relationship. A restatement of the traditional basis for marriage amounts to a “gay marriage ban” no more than existing marriage laws constitute an “incest ban” or a “ban on interspecies relationships.” Defining one sort of union as uniquely approved doesn’t mean that another sort of connection is specifically forbidden, or banned.

In a similar vein, nearly all major press outlets have stopped using the phrases “pro life” or “pro choice” to describe the opposing positions on the abortion issue. The most common phraseology now centers on “abortion rights” --- as in, “Rudy Giuliani offends GOP orthodoxy with his support for abortion rights” or “Mitt Romney once supported, but now opposes, abortion rights.” Such outrageously unfair language ignores the fact that no pro life candidate or advocate would ever say “I oppose abortion rights” – since they don’t believe that abortion constitutes a genuine “right” in any sense.

If a newspaper suggested that Senator Chuck Schumer opposed “Second Amendment rights” or “gun owners’ rights” the New York Democrat would have legitimate grounds for complaint: he describes himself as “pro gun control” not “anti gun rights.” If those who favor more restrictions on firearms generally avoid designation as opponents of any sort of rights, why is it appropriate to characterize pro-lifers as foes of “abortion rights”? After all, gun rights actually appear, explicitly, in the text of the Constitution whereas “abortion rights” rely on the famous (and gaseous) “emanations of penumbras” that Justice William O. Douglas first conjured out of his fertile imagination in 1965.

The cunning and consistent employment of various misleading phrases (“evolution opponent”, “gay marriage ban”, “opponent of gay rights,” “opponent of hate crimes protection,” “foe of stem cell research,” “opponent of abortion rights”) help to tip the scales in ongoing debates. So do the glowing terms frequently trotted out to encourage many items on the liberal agenda, such as “universal health care” (how could anyone oppose such a worthy concept?), “fighting global warming” (the alternative seems to be either doing nothing or actually encouraging this horror) or even “the fairness doctrine.” (Why would cranky conservatives object to the idea of “fairness”?).

On every issue, language matters. Yes, it makes a difference whether you describe the Bush tax changes of 2003 as “across the board cuts” or “tax cuts for the rich.” By the same token, “affirmative action” or ”diversity guidelines” always prove more popular than “quotas” or “race-based preferences” – though all four phrases describe virtually the same thing. No one likes the idea of “death taxes,” but “inheritance taxes” sound far more appropriate. “Welfare” sounds suspect and wasteful but “social service safety net” has a reassuring, compassionate ring. And of course no one in the current debate on illegal immigration seems to endorse “amnesty” while even many conservatives believe that “earned legalization” remains the most just and sensible course.

In a sense, the new press tendency to invoke biased, left-leaning terminology reflects the work of Berkeley linguist George Lakoff, who has argued for years that “progressives” (a much better word than “liberals”) must take control of the language in order to roll back the ideological victories for the right. He pointed to the way that conservatives used phrases like “tax relief” (implying that taxes are indeed a burden, rather than a privilege or a duty) and “partial birth abortion” (emphasizing that the child is half born in the process of its termination) to bring the public in line with their point of view. According to numerous reports, the top national strategists who helped the Democrats sweep the Congressional elections of 2006 took careful note of Lakoff’s theories and recommendations.

Conservatives should consider a similar re-evaluation of our phraseology to reinvigorate our side of ongoing debates, at the same time that we contest manifestly slanted descriptions like “pro” and “anti abortion rights.”

Even when it comes to a minor controversy over an insignificant position like “President of the National Association of State Boards of Education,” we suffer when the nation’s leading newspaper to characterize, without protest, an advocate of open classroom discussion as an “evolution opponent.” If right-wingers allow themselves to be characterized in such forbidding, Jurassic terms then we, too, run the risk of permanent extinction.

One Glaring Issue With Twitter's Case Against James O'Keefe
Townhall
'This information was hidden from you on purpose': Buck Sexton reacts to the release of Brian Sicknick's cause of death; Updated
Twitchy
WaPo Fact Checker Points out How an Impeachment Claim Goes up in Flames With Sicknick's Cause of Death
Redstate
Did Wrecking Ball Maxine Waters Give Derek Chauvin Grounds for an Appeal?
PJ Media