A Palestinian "Right of Return"? 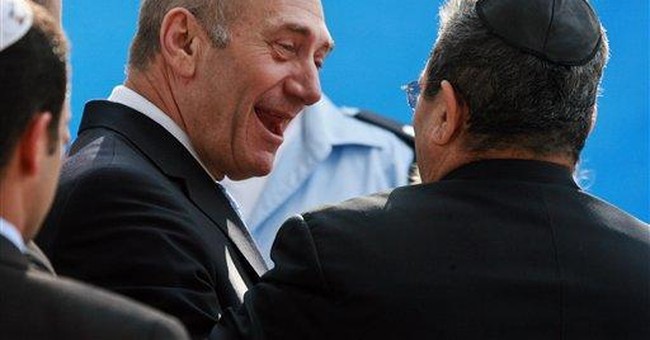 One of the most annoying quirks of our major media outlets involves their consistently misleading characterization of the current debate about demands for a Palestinian "right of return."

The latest Arab League peace proposal, recycled with much fanfare from a 2002 Saudi plan, includes a requirement that Israel should accept untold millions of Palestinians who would relocate into Israel itself, rather than making their homes in the newly created Palestinian State. Leading newspapers invariably describe this demand in terms that suggest that refugees would get "the right to return to their original homes inside Israel." (New York Times, front page, 3/31/07). Of course, this endlessly repeated phraseology sounds fair, compassionate, appropriate—conjuring up images of patient, oppressed, long-suffering innocents, finally able to return to their ancient roots and ancestral lands, shedding tears of joy as they renew and rebuild the "homes" they lost nearly sixty years ago.

Even worse, America's Journal of Record (and nearly all other publications and news sources) summarize Israel's objection to this "right" as a "fear that admitting large numbers of Palestinians would undermine the Jewish nature of the state."

Unfortunately, this ridiculously distorted description of Israel's point of view carries the connotation that the objection is purely racist: that the Israelis feel that the continued existence of their "Jewish State" is so precarious that they can't even consider admitting non-Jews (Actually, thousands of non-Jews arrive in Israel every month, prominently including workers from Thailand, the Philippines, Rumania and other nations).

Prime Minister Ehud Olmert recently re-enforced the impression of Israeli intransigence and anti-Palestinian racism with an unequivocal Passover-eve interview with the Jerusalem Post. "I'll never accept a solution that is based on their return to Israel, any number," he declared. "I will not agree to accept any kind of Israeli responsibility for the refugees."

Without doubt, overwhelming majorities of Israelis agree with the Prime Minister in rejecting the "right of return" concept, but his inability to express the proper basis for that rejection helps explain why his approval rating in polls has fallen lower than that of any prior leader in Israeli history.

The ongoing dispute over the fate of the refugees actually proves that the basis for the Arab-Israeli struggle hasn't changed in 60 years. The "War of Independence" began in 1948 because the Palestinians and their Arab supporters refused to accept the idea of an independent Jewish state in their midst, regardless of its borders or the clear-cut Jewish majority in the land originally mandated by the UN. Today, the insistence on a "right of return" shows that the Arabs still refuse to accept Israel as a sovereign nation, entitled to control its own destiny.

After all, they demand not only a right for any Palestinian to make his home in the new Palestinian State that the peace plan proposes, but they insist on an equal right for Palestinians to live in Israel proper. In other words, they demand not one Palestinian homeland, but two: one of them east of the Jordan, and the other one west of the Jordan. As part of the ludicrous "peace proposal," Israel would give up two of the basics of national existence: the right to control entry into the country, and to define citizenship. (And yes, as I've long acknowledged, immigration activists in the US are right to insist on our need to similarly control our own borders and to limit and regulate who gets the chance to live here. Without that ability – for Israel, or for the United States—sovereignty is hollow and meaningless).

Tzipi Livni, Israel's popular Foreign Minister, articulates the core issue far more clearly than Prime Minister Olmert. "Just as Israel is the homeland for 800,000 Jewish refugees who fled or were expelled from Arab countries," she says, "so a new state of Palestine should be the homeland for Palestinian refugees."

Actually, the Arab League and the United Nations currently count some 4.3 million Palestinians as "refugees" or the descendants of refugees – a hugely inflated figure which, if nothing else, gives the lie to claims of Israeli "genocide." After all, if 700,000 Palestinian refugees of 1948-9 have now become 4.3 million – multiplying by some 600% in less than 60 years—it's hardly an indication of genocide. Few populations on earth – certainly not American or Israeli – have boasted that sort of explosive growth during this period. Moreover, only a small minority of the refugees (and of the Palestinian population in general) were actually land-owners. Most were tenant farmers or "fellahin" or urban tradesmen, and most had arrived only recently in the area from their homes in Egypt, Syria, Iraq and elsewhere, lured by the economic opportunities presented by the surging Jewish population in the 1920's and '30's. The idea that the great-great-grandchildren of such arrivals possess some inviolable connection to specific landscape in today's bustling Tel Aviv or Haifa is both illogical and altogether unenforceable.

The Israeli position may sound harsh in Prime Minister Olmert's formulation, but it remains eminently reasonable: if the Palestinians will negotiate peace, they get to decide who lives in their new state, but they don't get to decide who lives in the neighboring state of Israel. What's the sense behind the very idea of a "two state solution" if the Palestinians insist upon a similar "right" to live in both states?

No, the debate isn't about compassion for refugees, or protecting the "Jewish character of Israel" (a phrase that brings up the old, discredited "Zionism-is-racism" charge), or ethnic cleansing, or any other distracting issue cited by the American press.

The issue, as always, is Arab refusal to accept Israel's existence and sovereignty. Until the Palestinians and their Islamic allies come to terms with the reality and permanence of a restored state on the ancient homeland of the Jewish people, and drop the ludicrous demands about a "right to return," peace negotiations will go absolutely nowhere.