Where Tim Hardaway Was Right 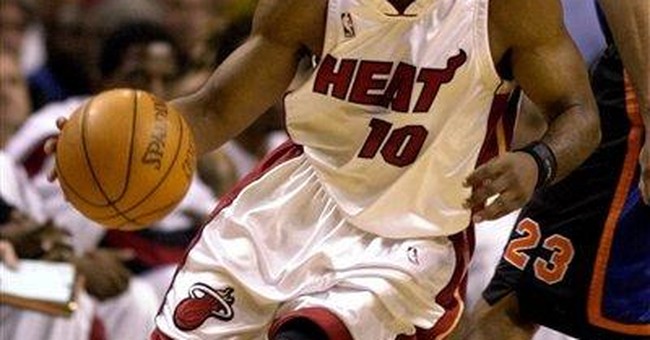 Hardaway appropriately apologized for his harsh remarks, but many (if not most) Americans no doubt share his instinctive reluctance to share showers and locker rooms with open homosexuals. That reluctance also explains the controversial Defense Department policy that prevents out-of-the-closet gays from serving in the United States military.

In the wake of the nearly-universal condemnation of Tim Hardaway’s statements to a radio interviewer, the substantive issue remains. Is it a reasonable for an NBA basketball player (or a soldier in basic training, for that matter) to feel uncomfortable sharing intimate quarters with a homosexual, or does this represent an outrageous, irrational fear? In response to the Hardaway controversy, several sports columnists compared his resistance to the idea of playing alongside gay teammates to the racism of previous years when white players tried to avoid competing with (or against) blacks.

The analogy is ridiculous, of course. There is no rational basis for discomfort at playing with athletes of another race since science and experience show that human racial differences remain insignificant. The much better analogy for discomfort at gay teammates involves the widespread (and generally accepted) idea that women and men shouldn’t share locker rooms. Making gay males unwelcome in the intimate circumstances of an NBA team makes just as much sense as making straight males unwelcome in the showers for a women’s team at the WNBA. Most female athletes would prefer not to shower together with men not because they hate males (though some of them no doubt do), but because they hope to avoid the tension, distraction and complication that prove inevitable when issues of sexual attraction (and even arousal) intrude into the arena of competitive sports.

Tim Hardaway (and most of his former NBA teammates) wouldn’t welcome openly gay players into the locker room any more than they’d welcome profoundly unattractive, morbidly obese women. I specify unattractive females because if a young lady is attractive (or, even better, downright “hot”) most guys, very much including the notorious love machines of the National Basketball Association, would probably welcome her joining their showers. The ill-favored, grossly overweight female is the right counterpart to a gay male because, like the homosexual, she causes discomfort due to the fact that attraction can only operate in one direction. She might well feel drawn to the straight guys with whom she’s grouped, while they feel downright repulsed at the very idea of sex with her.

Many gay activists suggest that this near-universal straight male repulsion at the idea of sex with another man is merely the product of cultural conditioning: a learned prejudice that ought to be unlearned. This represents the core message of gay pride parades and even the drive for same-sex marriage: an effort to persuade all of society that gay sex is as beautiful as straight sex, and to “cure” men of their visceral disgust at the very thought of what two (or more) male homosexuals do with one another.

According to the “enlightened” advocates of gay liberation, this disgust gets to the very essence of “homophobia” – an altogether unjustified fear and distaste for male-on-male physical intimacy. When Hardaway says “I hate gay people” what he suggests at the deepest level is that he feels revolted by the very notion of same-sex eroticism and that he’d prefer not to face the distraction of such thoughts in the locker room or on the court.

In this sense, the reluctance to team (in athletics or the military) with announced homosexuals isn’t bigotry, it’s common sense. The recent “Astronaut Love Triangle” provides a pointed reminder of the way that even disciplined military careerists can be diverted, even ruined, by attraction, eroticism and romance.

Those who insist that basketball teams or submarine crews must welcome gay recruits must, for the sake of consistency, argue for the same welcome to teammates of the opposite gender. That notion – that a male player could, for instance, join a WNBA team without serious problems – shows the way that political correctness now seems to deny the obvious, often overwhelming potency of human sexuality.