The Only Fair Way to Judge Presidential Success 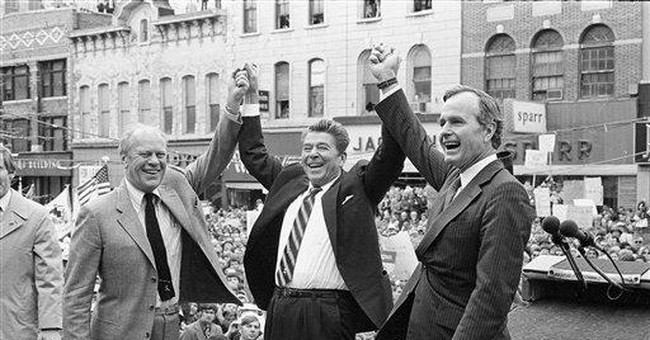 The only valid, sensible way to judge a President involves an evaluation of whether the nation thrived or suffered under his leadership.

In place of our current obsession with charisma, eloquence and flair, we need a new focus on practical results: asking only whether a given leader left office with a stronger, more prosperous America than the country he inherited.

The approach of Presidents Day in less than a week provides the opportunity for new historical perspective on our long-standing failure to apply this principle.

For instance, we generally dismiss the furry-faced chief executives who presided over the magnificent years of the late nineteenth century, when the United States rapidly overcame the devastation of the War Between the States and became the world’s leading economic and military power. Between 1870 and 1900, the population of the country more than doubled while the Gross Domestic Product more than quadrupled – producing an altogether unprecedented improvement in the standard of living. Important new states entered the union (Colorado, Idaho, Montana, North Dakota, South Dakota, Utah, Washington and Wyoming) while American society absorbed and assimilated a vast tidal wave of immigrants. Major cities (including Chicago and Seattle) burned to the ground in devastating fires, but rebuilt themselves with stunning rapidity and elegance, while American inventors and industrialists provided the technology to change daily life around the world. The nation lived at peace for the better part of thirty years, until a crisis in the Caribbean produced “the splendid little war” against Spain – a brief, decisive, immensely popular conflict that left the U.S. a dominant force as far away as Asia.

As summarized by the editors of American Heritage in their book “The Confident Years”: “It was period of exuberant growth, in population, industry and world prestige. As the twentieth century opened, American political pundits were convinced that the nation was on an ascending spiral of progress that could end only in something approaching perfection. Even those who saw the inequity between the bright world of privilege and the gray fact of poverty were quite sure that a time was very near when no one would go hungry or ill clothed. These were indeed the Confident Years.”

Despite these dazzling achievements, historians grant very little respect to the leaders who presided over all this prodigious dynamism: Ulysses S. Grant, Rutherford B. Hayes, James A. Garfield, Chester A. Arthur, Grover Cleveland, Benjamin Harrison and William McKinley. According to the twelve major surveys of historians taken between 1948 and 2005, five of the seven presidents in this group rank as decidedly “below average” while Grover Cleveland (the only Democrat in the bunch) and William McKinley (the triumphant commander-in-chief in the Spanish American War) barely make it into the “high average” category.

To most Americans, the seven presidents who led the nation in these years of peace, prosperity and undeniable progress remain obscure or unknown mediocrities. As long ago as 1935, the novelist Thomas Wolfe wrote about four chief executives in this group as “The Four Lost Men”: “Garfield, Arthur, Harrison and Hayes—time of my father’s time, blood of his blood, life of his life, had been living, real, and actual people in all the passion, power and feeling of my father’s youth. And for me they were the lost Americans: their gravely vacant and bewhiskered faces mixed, melted, swam together in the sea-depths of a past intangible, immeasurable, and unknowable as the buried city of Persepolis. And they were lost.”

This unjust disregard of the national leaders of the “Gilded Age” reflects the distorting liberal bias among historians for whom the only accomplishments that count are the achievements of government. Without question, the major successes of the thirty years between 1870 and 1900 involved private business and individual initiative, rather than government programs or Washington, D.C. decisions. But the presidents of the period displayed the consistent good judgment to avoid interfering with the creative energies of the market place or trying to “manage” (and thereby stifle) the nation’s explosive growth. Despite passionate debates over tariffs and currency, the chief executives of that span consistently illustrated the wisdom in Jefferson’s maxim about “that government governs best which governs least.” For the most part, they left major challenges to states, localities, corporations and individuals – and Americans of every walk of life rose to the occasion.

Compare our current respect for a miserably failed leader like Jimmy Carter to the indifferent or contemptuous attitude to vastly more successful politicians like Grant, Hayes, Garfield and company. The latest Gallup Poll shows that Americans overwhelmingly rank Carter as “above average” (not just “high average” like Cleveland or McKinley) but by what standard did the pathetic, out-of-his-depth Georgian leave the nation better off than the way he found it? Carter presided over appalling foreign policy disasters (Iran, Afghanistan, Nicaragua) and watched the U.S. economy face its gravest crisis since the Depression, with interest rates and inflation in double digits and unemployment of more than 8%. No wonder he lost 44 states in his feckless bid for re-election!

Those who express affection or admiration for Jimmy Carter may concentrate on his active (and controversial) life as an ex-president but they can hardly defend his administration in terms of the national welfare during his years in the White House.

By the same token, those who insist on describing George W. Bush as “the worst president in American history” clearly apply some standard of their own with n o connection to the real well-being of the country. After more than six years of Bush, America remains prodigiously powerful and fabulously fortunate – reaching the highest ever levels of home-ownership and college enrollment (to use two measures that touch people personally). Even for those who despise President Bush, the last four years of robust and vibrant prosperity (and, yes, of sharply rising incomes) ought to get him off the hook when it comes to the “failure” category. Moreover, since 9/11 struck the nation in the first eight months of his term, the President’s aggressive (and wildly polarizing) leadership on the War on Terror confounded most expectations by preventing or avoiding another attack on American soil. With low unemployment, low inflation, lowered taxes and (in the last three years) a sharply declining deficit, the Bush bashers face the same challenge as Hayes or Arthur or Harrison bashers: how can you claim the president did so poorly when the nation did so well during the years he held office? Even if you count the Iraq War as an unmitigated disaster, its failure to embitter daily life or block economic progress for most Americans should help place the conflict in a better historical context.

Of course, crediting the Commander in Chief for every positive development in the country makes no more sense than it does to blame him for every disaster or setback experienced under his watch. Nevertheless, when the American people express such overwhelming satisfaction and optimism (in all major surveys) about their personal lives – including jobs, families, neighborhoods-- it makes little sense to view the rest of the country (and the president’s performance) with such relentless negativity. Though our current growth and good fortune may well fall short of the epic successes of “The Confident Years,” the president still shares with his bearded predecessors the same inability to win appreciation for the burgeoning blessings of the nation he leads.