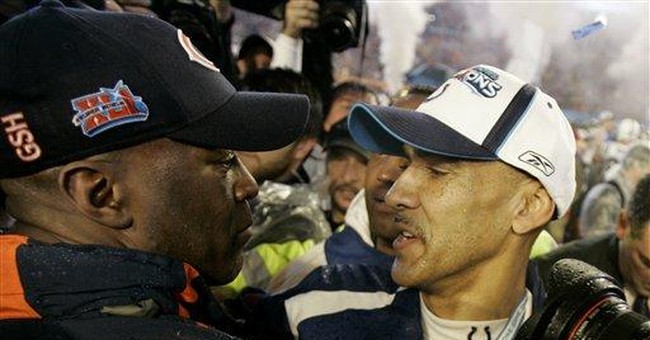 Could the Super Bowl mark a welcome turning point in our national obsession with black victimization?

For several years, African-Americans have comprised a substantial majority of all players in the nation’s most celebrated sporting event, and this year, for the first time, both head coaches (Tony Dungy of the champion Indianapolis Colts and Lovie Smith of the runner-up Chicago Bears) also took pride in their black identity.

A few weeks later, another audience of billions will tune in to another landmark of popular culture. At the Academy Awards ceremony, black actors and actresses will almost certainly dominate: Forest Whitaker is a sure-thing Best Actor winner for “:The Last King of Scotland,” and Jennifer Hudson counts as equally certain to win the Best Supporting Actress Oscar for “Dreamgirls.” Meanwhile, Eddie Murphy counts as the heavy favorite for Best Supporting Actor for “Dreamgirls” --- giving African-Americans 75% of the available acting trophies.

These upcoming awards reflect the overall dominance of prodigiously talented black performers in every arena of entertainment. Amazingly enough, the top movie box office draw (Will Smith, whose lovingly-crafted, uplifting film “The Pursuit of Happyness” earned a jaw-dropping $150 million) and the most popular TV personality (the ubiquitous, universally admired Oprah Winfrey) both boast deep roots in the African American community.

In all forms of mass entertainment, black people have achieved disproportionate prominence and success. No other readily identifiable ethnic group or minority community (not Latinos, Asians, Jews, Irish, Italians, gays, you name it) commands anything like the popularity and adulation of black super-stars--- even in previously all-white endeavors like golf and tennis.

Despite the widespread conviction that our country remains incurably racist and hostile in its attitudes toward African-Americans, ordinary people have voted with their available funds: spending countless billions to embrace black music, dance, comedy, talk shows, drama, athletic excellence, and even comic book heroes.

To top off this “black moment” in our history, a charismatic but little known Illinois politician emerged after just two years in the U.S. Senate as one of the genuine Presidential front-runners for 2008 not in spite of his African-American identity, but because of it. Whether or not Barack Obama wins the Democratic nomination or the White House, his unprecedented, dazzlingly rapid rise provides one more bit of evidence that ancient biases and limitations and hatreds have begun to break down and even disappear.

The signs of reduced levels of racism have become so powerful and unmistakable, in fact, that the refusal to acknowledge this breathtaking decline in bigotry may soon comprise a greater threat to the black community than racism itself.

A new study by researchers for the “Black Youth Project” at the University of Chicago (in Barack Obama’s home town) shows disturbing levels of defeatism, paranoia and self-pity among 15 to 25 year olds.

This survey of 1,590 young people revealed that

? 48% of blacks believe “the government treats immigrants better than it does blacks”

? 68% agree with the statement that “the government would do more to find a cure for AIDS if more whites were infected” – ignoring the fact that white homosexuals do, in fact, already represent the largest group of AIDS victims in the U.S.

? 61% of blacks say it is “hard for black people to get ahead because of discrimination”

? Only 49% of blacks say that “they were rarely or never discriminated against because of their race,” compared to 83% of whites and even 68% of Hispanics.

With the many gloomy respondents to this survey, it makes no sense to argue about whether or not their discouraging assumptions are true, but it’s entirely appropriate to ask whether they’re beneficial.

Even if the government really did discriminate (at a time when four new black committee chairs have taken power in Congress), even if bigotry made it “hard to get ahead,” it’s undeniably unhelpful to embrace and affirm such assumptions.

Academics have accumulated a veritable mountain of psychological evidence to prove that optimism becomes a self-fulfilling prophecy. Martin E.P. Seligman of the University of Pennsylvania, former President of the American Psychological Association, proved in his 1990 book Learned Optimism that confidence of success can play as large a role in positive outcomes as talent or hard work. In business, politics, the arts, athletics, law, medicine and every other competitive field, belief in your own ability to prevail provides an essential element in achievement.

Just a few weeks ago, the New York Times reported on “new evidence that optimism may in some ways be self-fulfilling. In a recently published study, researchers in the Netherlands found that optimistic people – those who assented to statements like ‘I often feel that life is full of promise’ – tend to live longer than pessimists. Perhaps, it has been speculated, optimism confers a survival advantage by helping people cope with adversity.”

If self-confident optimists do indeed live longer, could persistent black fears of racism contribute to lower African-American life expectancy at least as much as (illegal) discriminatory treatment by doctors and hospitals?

On the most obvious, common-sense level, the assumption that you can’t possibly succeed at some challenge makes it far less likely that you’ll ever try. In this context, the endless emphasis on black victimhood – like the much-ballyhooed, just-passed resolution by the Virginia legislature apologizing for the crimes of slavery - may well do more harm than good to the cause of continued progress.

Rather than dwelling on the unspeakable cruelties of a painful past, why not celebrate the astonishing (and scarcely acknowledged) fact that African-Americans now comprise 11% of incoming college freshmen – just slightly below their 13% of the population?

Rather than bewailing the landslide passage of a 2006 Michigan initiative outlawing racial quotas and preferences, why not recognize that many citizens voted for it (including substantial segments of all minority communities) not because of racism, but because of their conclusion that racism had already dramatically declined?

Even if blacks sweep the Oscars as expected, even if Obama draws support across all racial lines in a march to the White House, some race hustlers in the Sharpton-Jackson mode will continue to insist that the white majority is every bit as obsessed with skin color as they are. After all, if these activists recognized the truth about the vastly greater acceptance, even affection, toward black people, it might hurt the guilt-and-grudge industry that pays their salaries.

But with epic milestones in the recent past and the immediate future, and in the mist of an especially fateful Black History Month, Americans of all races can only benefit from appropriate acknowledgment of stunning advances on the march to justice. Such recognition will prove more likely to produce further steps forward than to encourage complacency.

In life, as in popular culture, we can’t afford cynicism or complacency regarding the distance we’ve traveled. “Progress might have been all right once,” sighed wit and poet Ogden Nash, “but it has gone on too long.”

Appropriate levels of optimism and confidence will help to insure that it will go on even longer.