Good Reasons to Scoff (and Yawn) at the Libby Trial 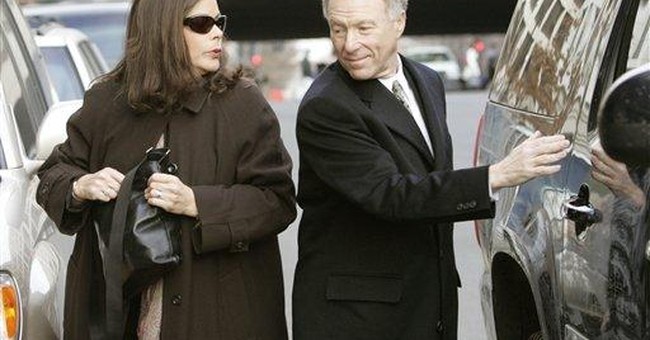 Despite rigorous efforts on the part of the media establishment, the public has so far reacted to the perjury trial of vice presidential aide I. Lewis "Scooter" Libby with a combination of weary, slightly annoyed disinterest and bemused boredom.

Though the complicated case contains cloak-and-dagger overtones (with its focus on the "outing" of CIA employee Valerie Plame), a prominent defendant with a colorful nickname ("Scooter" has been characterized as the most powerful aide to the most powerful vice president in history) and even a touch of glamour (Ms. Plame is a slender blonde who looks stylish in endlessly recycled video on cable news), I have yet to meet anyone outside the punditocracy who has closely followed the details of the trial.

There are three reasons that coverage of these legal proceedings produces mostly yawns or an irresistible urge to turn the page of your newspaper or punch a new channel on the remote control.

1. There's Nothing at Stake in the Verdict. Scooter Libby has already resigned his lofty post as chief of staff to Dick Cheney, and no one believes he'd get it back if he's acquitted. Moreover, there's no longer any reason to believe that this case would "bring down the Bush administration" or lead to other high level resignations or prosecutions. Prosecutor Patrick Fitzgerald has already passed on legal action against other figures prominently involved in the tangled case (like former Deputy Secretary of State Richard Armitage or Presidential Counselor Karl Rove) and no one -- no one -- has been charged with a crime in identifying Ms. Plame as an employee of the CIA. Unlike Iran-Contra, or the various Clinton scandals that coalesced in impeachment proceedings, there is no sense of White House jeopardy or potential crisis. Regardless of the jury's decision, there won't be some further meltdown of the already unpopular Bush administration -- unpopular for more substantive reasons (particularly the painful course of events in Iraq) than the exposure of an insignificant desk-jockey at Langley.

2. There's No Wounded Victim. The idea that the publicity surrounding Valerie Plame and her husband, Joe Wilson, has "ruined their lives" is preposterous on its face, given their apparent enjoyment of their newly minted celebrity status, a pending book contract for a lavish advance, and Wilson's previous high-profile, highly remunerative memoir with its accompanying book and lecture tour. If the Wilsons had intended to keep Ms. Plame/Mrs. Wilson out of the public eye, it would have made sense for Joe Wilson to have avoided using his own name in the famous New York Times column providing dubious exposure to his own back-channel mission to Africa -- a mission for which his wife had recommended him. In any event, when it comes to the media's instinctive desire to focus on some glamour girl who's suffering for no reason, there's a much better candidate in this case than Valerie Plame. How about Harriet Grant, Scooter Libby's wife and the mother of their two children -- a strikingly handsome woman (and prominent Democratic lawyer) who has seen her family's financial ruin and the total disruption of their lives due to this vindictive and utterly pointless prosecution?

3. There Was No Evil Conspiracy to "Destroy" Joe Wilson or Valerie Plame. Perhaps the most relevant revelation of the trial so far concerns the surprising number of government officials at every level in several departments who knew Ms. Plame worked at Langley before Bob Novak's notorious column, and talked about it with little hesitation or concern. One can easily conclude that all of these federal employees should have been more careful about identifying a CIA operative but one can hardly impute to any of them the intent to "destroy" Joe Wilson or his wife. If Armitage, Rove, Libby, Cheney, former Cheney press aide Cathie Martin, CIA spokesman Bill Harlow and many others had wanted to "smear" the Wilsons they could have whispered details of Joe's two divorces, or the passionate, steamy Wilson-Plame romance (according to Wilson's own description) that brought the lovebirds together (during Ms. Plame's service for the CIA). Indicating to the media that someone works at the CIA hardly amounts to a "smear" or to "character assassination." By identifying the nepotistic basis for Wilson's trip to Africa (supposedly to bring information to Cheney's office) the administration operatives certainly attempted (very clumsily, it must be said) to call his credentials and conclusions into question, but this attempt hardly amounts to a vicious, personal attack.

The surprisingly casual nature of the whole "Plame-Gate" matter emerged indelibly in testimony on Thursday from Cathie Martin, former spokeswoman for Vice President Cheney. According to the New York Times, Ms. Martin "described how Mr. Libby had telephoned a senior Central Intelligence Agency official in her presence sometime in early July and asked about the Wilson trip. She said she was then put on the phone with Bill Harlow, the C.I.A. spokesman, who told her that Mr. Wilson went to Africa on behalf of the agency and that his wife worked there." Of course, the best evidence of the absence of conspiratorial or destructive intent on the part of Libby (or his colleagues) comes from the failure of the ferocious prosecutor Patrick Fitzgerald to indict anyone at all for conspiracy or violation of secrecy laws when it came to the disclosure of Ms. Plame's employment.

4. The Administration's Desire to Defend Itself Looks Natural, not Criminal. If a former diplomat (and partisan Democrat) breaches the confidentiality of an investigative mission to Africa, distorting some of the findings and writing a column attacking the president, does anyone expect that the administration will fail to respond? And the most natural focus for that response would be to make clear that he had not been chosen for this role by the vice president (as he claimed) but through the recommendation of his wife to her CIA superiors. The media actually demanded a response to Joe Wilson's charges and if White House officials (yes, including Scooter Libby) had offered only "no comment," they would have equated this reaction to some sort of admission of guilt. While some observers view the administration blowback to Joe Wilson as an example of political "hardball," the testimony about the limited and cautious nature of their conversations with reporters makes the game look more like slow-pitch whiffle ball.

5. In Short, No One Has Identified the Sleepy, Meaningless Proceedings Against Scooter Libby as "The Trial of the Century" and the Public Disinterest Seems Altogether Justified. Republicans rightly grouse over Prosecutor Fitzgerald's investment of tens of millions of dollars and thousands of hours in wasted time to produce nothing more than charges that Scooter Libby gave inaccurate accounts to the FBI and grand jury about his conversations with reporters -- or at least that his recollections differed from those of the reporters. Democrats answer such concerns by citing the purported "100 million dollars" spent to investigate Bill Clinton "for lying about sex" -- while ignoring the fact that Whitewater special prosecutors did win several convictions of prominent public figures (including a former governor of Arkansas, Jim Guy Tucker).

6. In Retrospect, the Fierce Legal Attacks Against Both Democratic and Republican Administrations Look Wildly Overblown and Amount to a Serious Disservice to Our Democracy. My friend and law school classmate Lanny Davis (former special counsel to President Clinton) has written persuasively about the devastating impact of this tit-for-tat indulgence in the politics of personal destruction in his recent book "SCANDAL: How Gotcha Politics Is Destroying America."

7. Despite Energetic Attempts to Connect President Bush With Scandals Concerning Enron, the Texas National Guard, Jack Abramoff, Tom Delay and even Mark Foley.... This beleaguered White House can take some comfort from the fact that Scooter Libby remains the only prominent administration official forced to stand trial. In this sense, the dreary, dull and pointless proceedings against the vice president's former aide may even provide the embattled Bushies with a rare bit of good news.