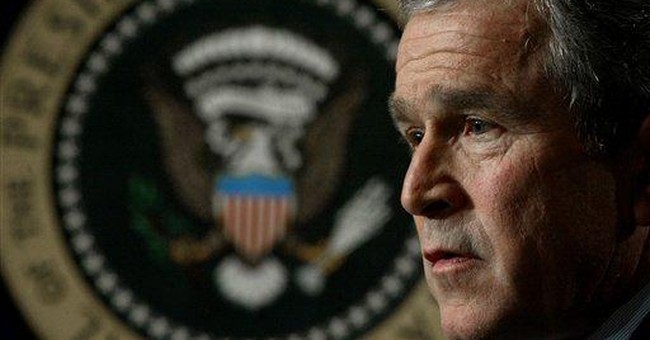 Maybe it's not "The Most Important Speech of His Presidency" -- according to conventional wisdom, that would have been his recent announcement of a "new direction" in Iraq -- but the upcoming State of the Union address still presents a hugely significant opportunity for President Bush.

He can seize that opportunity if he sets the right ambitious, activist tone, and if he breaks decisively with the recent tradition of presenting boring laundry lists in place of oratory.

Surely, the president and his advisors understand that they must use this speech to reassure the public that the remaining two years of this administration will amount to more than gridlock, partisan posturing and polarization. The Democrats who now control both houses of Congress made a credible start with their well-advertised "100 Hours" agenda -- winning passage of a series of largely insignificant, demonstrably popular and mostly uncontroversial measures.

Some of these feel-good gestures (like the lavish funding for embryonic stem cell research) will no doubt inspire Bush vetoes. But the president should avoid making any reference whatever to these forthcoming battles. Doing so would amount to a tacit acknowledgment that the Democrats now set the agenda and that he merely responds, enabling them to focus ongoing debate on issues on which both the public and Congressional majorities clearly side with them.

In order to regain the initiative, to rally demoralized Republicans, to restore the reformist edge and ambitious conservative vision that recently have been overwhelmed by setbacks in Iraq and at the ballot box, President Bush must chart a middle course between conciliation and confrontation, deference and defiance. He can't come across like a whipped puppy that's eager to please, but he must also avoid any suggestion of stubborn obstructionism that ignores the messages of the recent elections.

To convey the right flavor of energy and engagement, the president should concentrate on three essentials for the State of the Union Address:

1. Startle the Country With Brevity and Focus

Let's face it: Most SOTU speeches are snoozers -- even when delivered by first class orators like Reagan and Clinton. All the departments of government contribute their own ideas during the preparation period, and expect some nod from the president. These stately, lumbering addresses provide pomp and grandeur and lots of opportunity for partisan applause, but only rarely can anyone remember what the president actually said.

If Bush kept his remarks to less than a half hour (including applause) rather than the customary hour-or-more, he'd throw the opposition and the media (often the same thing, by the way) utterly off balance. Rather than listing all his hopes and plans in the speech, he should sketch out broad visions -- and simultaneously release to the press and Congress far more detailed plans and proposals.

Last year, President Bush offered a lengthy list of worthy propositions covering the broadest possible range of security, foreign policy, economic, environmental, social and cultural issues. Even his most devoted supporters would find it difficult to recall any of these suggestions. At the moment, the public wants a sense of change and movement -- of logjams breaking, of progress and cooperation. The president can capture that spirit if he sketches a few lofty but comprehensible goals that people can remember, and may want to discuss the next day around breakfast tables or water coolers at work.

Even on the bitterly divisive question of Iraq policy, President Bush must affirm that he and his Democratic critics share the same crucial aims: a viable, pro-western, anti-terrorist government in Iraq, and the return of most of our troops before the end of his presidency. If he pledges to achieve dramatic force reductions within that specified time period, the Democrats won't contradict him on the desire for a stable Iraq -- even though many of them no longer believe that this long-term goal of U.S. policy is worth further sacrifice.

By the same token, the American people want to see ethical reform and a reduction in the influence of lobbyists and big business. The president should announce that he shares that desire with the Democrats, and therefore demands a new effort to scale back the biggest source of corruption: the intrusion of government bureaucracy into every corner of the economy and every intimate detail of our lives.

This speech could provide an unparalleled opportunity to link the public desire to clean up influence peddling and special interests with a sweeping new effort to scale back regulation and lawsuits and the diabolical complications of the tax system that help make the sleazy dealing all but inevitable.

Energy independence remains another area where the president can stress common goals. He's spoken at length about energy issues in each of his previous SOTU speeches, but even his surprising promotion of hydrogen vehicles made little impression. This time, he should sound an impassioned call for three over-arching aims that the Democrats must enthusiastically support -- much stronger conservation and energy efficiency, more development of alternative energy sources, and quickly increased production of domestic petroleum. He must plead for the necessary interdependence of these three goals, suggesting that an emphasis on only one or two of them will make meaningful progress impossible.

Finally, he should surprise the world and energize his base by pledging himself to work tirelessly for one of the two huge issues which Democrats assume he'll never dare to touch: entitlement reform to protect the government's future solvency, and/or radical, across-the-board tax simplification. In his State of the Union, he should get the country to acknowledge the worthiness of his broad purposes -- shoring up Social Security and Medicare to prevent their future collapse, and rescuing the overburdened American taxpayer from the nightmarishly complex process of filing returns and trying to dodge taxes. Even if the Democrats block all progress in this direction, he will still benefit by forcing them to respond to his (conservative) reform agenda.

I would like to hear President Bush congratulate the Democrats on their success in the elections and their dynamic leadership during the opening days of Congress, showing that it's still possible for the system to move quickly and get things done.

"You've shown unity and dedication in setting the agenda for the first hundred hours," he could proclaim. "Now let us work together to set a joint agenda for the next hundred weeks." (And yes, Bush does have that long before he turns over the White House to his successor.)

In that context, he can place himself above partisan politics. After all, he might be the only person in the House chambers during that joint session who's never had a moment's thought of running for the White House in 2008 (the Constitution makes it impossible for him).

With Hillary, Obama, McCain, Kerry, Dodd, Biden, Hagel, Brownback and many other would-be candidates in the audience for his speech, the commentators and TV cameras will focus on them and attempt to discuss the address in terms of their prospects in the primaries. Bush should ask us all to forgo that temptation: to concentrate instead on working together to make the most of the two years left in his term rather than pushing all the problems onto the desk of the next president.

"Many of you tonight might feel tempted to look ahead to the next election in 2008," he might say. "But it's more important that we look back at the elections of 2004 and 2006, and the promises we made to the people to act decisively in their behalf. Keeping faith with the votes they've already cast is more urgent and important than angling for support in some future campaign that hasn't even started."

A few days before his big speech, President Bush received an encouraging sign that despite the increasingly vicious criticism of his leadership on Iraq, a pitch for bipartisanship and cooperation might find some eager support from the opposition party. The House Democrats invited Bush to join them at their February private retreat in Colonial Williamsburg and the president promptly agreed. It's a small gesture, perhaps, but if he alludes to it in his speech -- mentioning other battling leaders (Jefferson, Madison, Patrick Henry, George Mason, George Washington) who once managed to work together in Williamsburg in even more trying circumstances -- the little signal might convey a big message.

One final factor may help facilitate a successful speech by the president on Tuesday night.

Throughout his career, George W. Bush has always seemed energized and at the top of his game when he faced skepticism and low expectations -- in his memorably feisty second debate with Kerry, for instance, after his lame, shrugging performance in their first exchange. In 2000, after John McCain won a landslide victory in New Hampshire, Bush came roaring back with renewed fire and passion (and some say viciousness) that turned his flailing campaign around.

At this point he knows that his heavily-hyped Iraq speech proved itself a dud that collapsed with a sickening thud. After the big build-up and long anticipation, the president, regardless of the evaluation of the substance of his remarks, delivered a listless TV performance with an uncharacteristic air of uncertainty, even desperation.

He needs to regain some of his Texas swagger, and to reframe the debate in historic terms of big ideas and significant, attainable, comprehensible goals. He's done it before in some of his most successful prior addresses -- in both of his convention acceptance speeches, for instance, and his second Inaugural.

With many commentators expecting a chastened, even frightened president facing a hostile Congress for the first time, I'm betting that he manages to exceed their paltry expectations one more time. With this in mind, the crucial demand for the State of the Union Address comes down to a simple plea: Mr. Bush, surprise us.

Democratic Strategists Acknowledge Grim Reality: Kamala Harris May 'Do More Harm Than Good'
Townhall
Is THIS why the DC mayor's new mask order didn't start until Saturday morning?
Twitchy
Texas Democrats Finally Begin to Realize They Are Screwed
Redstate
The Day the Petty Tyranny of Nancy Pelosi Was Brought Down
PJ Media