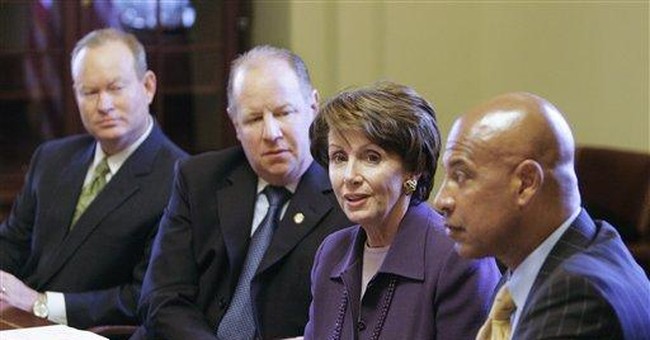 The opening days of the new Democratic Congress provide a forceful reminder that America’s most powerful media outlets don’t play fair and won’t cover partisan politics with anything approaching objectivity.

The glowing, America’s-sweetheart coverage of new speaker Nancy Pelosi served to bury the evidence of her early missteps and reverses. Instantly, major commentators and network talking heads forgot all about her embarrassing defeat in the fight for majority leader (when Stenny Hoyer handily trounced Pelosi’s hand-picked candidate, John Murtha) or her fumbling over chairmanship of the Intelligence Committee (where she slighted both the moderate Jane Harman and black caucus member Alcee Hastings to appoint the woefully unprepared Silvestre Reyes, who knew nothing of the distinction between Sunni and Shiite).

Instead of focusing on the substance or even style of her leadership, the major TV Networks, newspapers and newsmagazines concentrated on her gender. Charles Gibson of ABC summarized the festive day of her inauguration by citing one image, in which the Speaker sat at her desk playing with her grandchildren, suggesting that this touching vision (obviously arranged by her savvy handlers) represented a new reality of a womanly leader who “could take care of the children at the same time she takes care of the whole country.”

The worshipful cooing toward the new Speaker offered a stark contrast to the coverage of the last partisan House leader to command the troops in a sudden, sweeping takeover of a Congress long-dominated by the opposition. In 1995, when Newt Gingrich and the “Contract With America” Republican Revolutionaries surged to victory after capturing 55 Democratic seats, the press blasted the new speaker with ferocious negativity regarding both his personality and his policies. Time and Newsweek each featured cover stories with a childish pun about “The Gingrich Who Stole Christmas,” suggesting that the GOP’s promised budget cuts would drive poor people even further into misery and despair. As the nation braced for a Republican House of Representatives for the first time in 40 years, various pundits and pontificators focused on Newt’s alleged abrasiveness and fanaticism, even dredging up nasty stories about his divorce from his first wife, Jackie, some 13 years earlier.

In contrast, the coverage of the ascension of Speaker Pelosi provided scant examination of her personal life (or legendary temper with underlings and associates) and instead warmly embraced her own description of her path from “the kitchen to the Congress.” In fact, Pelosi’s background provided scant evidence of Cinderella-like toil in peeling potatoes and washing dishes: as the daughter of a wealthy, prominent father and the young wife of a multi-millionaire husband she always enjoyed servants to do the scut work in the kitchen. In fact, as the daughter of a Baltimore Mayor and Congressman, she rode to school even as a little girl in a chauffeur-driven limousine.

When forced to explain the contrast between the mash-note reporting on Pelosi’s rise and the hostile, barbarian-at-the-gate blasts regarding Newt’s arrival as speaker, apologists for the mainstream media cite two factors.

First, they claim that Pelosi projects a warmer, more attractive image than did Speaker Gingrich – noting her svelte and stylish form, complete with fashionable wardrobe and elegant pearls, as more obviously appealing than Newt’s no-nonsense bulldozer beefiness. Unfortunately, this emphasis on superficial appearance seems to contradict one of the cardinal rules of feminism that Speaker Pelosi claims to exemplify: that it’s essential to consider the inner woman or man, rather than making judgments based on the artificial exterior.

Second, media insiders justify the more generous treatment of this Congressional takeover by insisting that there’s more public support for the Pelosi agenda than there was for the Contract With America program —even though the voting patterns show that the ’94 Republicans actually won an even more overwhelming victory than the 2006 Democrats. On CNN’s weekend show “Reliable Sources,” I debated this issue with Rachel Madow of Air America radio. She pointed out that the Pelosi goals for her first 100 hours – funding embryonic stem cell research, providing meaningless endorsement of the recommendations of the 9/11 Commission, raising the minimum wage – were less controversial than Newt’s sweeping program to roll back federal spending, taxes, and the welfare state. She’s right, as far as that goes, but the reasons for the relative lack of controversy regarding Pelosi’s opening gambits is their utter lack of significance – a point which the press never seemed to raise. Wouldn’t a fair-minded reporter note that the most explosive and divisive issues of the day – involving the war in Iraq, aggressive counter strikes against terrorism, balancing the budget, deciding tax rates, defense of marriage, social security and so forth – played no role whatever in the Democrats’ opening flurry of show-offy, feel-good activity?

The failure to confront the new Democratic leadership with the same tough questioning with which they regularly approach Republicans doesn’t stem from any sort of media cabal. Network executives and top editors never get together in a secret smoke-free back room to eat brie and sip Chablis and plot the best way to promote the Pelosi-crats. Instead, they simply react like human beings who happen to share numerous preferences and prejudices.

For instance, can anyone doubt the proposition that most members of the national media feel more affection for San Francisco (home of Speaker Pelosi) than they do for Marietta, Georgia (home of former Speaker Gingrich)? It’s actually likely that most reporters have never visited Marietta and few of them would choose to go there on vacation or for some romantic getaway. Does that matter? It shouldn’t, perhaps, but it obviously does.

Media apparatchiks naturally and almost universally prefer deep blue states like Massachusetts and California to deep red states like North Dakota and Alabama. It’s also inevitable that a press corps following President Clinton on one of his frequent summer jaunts to Martha’s Vineyard would find itself in a better mood, a more generous frame of mind, than the long-suffering reporters assigned to sweat and complain in the stifling, middle-of-nowhere summer heat of President Bush’s beloved retreat in Crawford, Texas.

The instinctive preference for all things liberal remains powerful and unassailable in part because it’s unconscious, almost innate. Journalists seldom question their own leftist tilt because they assume it reflects decency, good-heartedness and generosity rather than any partisan bias.

A recent front page headline in one of Seattle’s two major newspapers (the venerable, staunchly Democratic, Seattle Post-Intelligencer) made the point in unforgettable style. The region had just endured a disturbing school shooting at Foss High School in Tacoma where an 18-year-old student used a 9mm handgun to murder a 17-year-old classmate minutes before the start of classes. Both the victim and the shooter came from Indo-Chinese immigrant families and the authorities have yet to establish a motive or the means by which the pudgy, long-haired, bespectacled killer acquired his weapon. Nevertheless, the huge screaming headline in the newspaper declared: “DESPITE SHOOTINGS, GUN CONTROL UNLIKELY.” The sub-head offered: LEGISLATION: LAWMAKERS RELUCTANT TO PASS MEASURES; POWER OF N.R.A. LOBBY, WARY POLITICIANS CITED FOR INACTION.”

The news report concerning the shooting began with the following paragraph: “Heading into the 2007 Legislature, leading lawmakers are reluctant to pass gun control measures despite last year’s mass killing on Capitol Hill, a downtown office shooting and this week’s gun slaying of a Tacoma high school student. Insiders and experts say the gun lobby’s influence may be too strong, politician’s courage too weak….”

In other words the reporter (one Melissa Santos) and her editors who wrote the headlines so strongly, unquestioningly assume that the normal, proper reaction to a spate of violence would be more gun control , that they based their front-page coverage on the shocking fact that many elected representatives (in a state legislature nearly two-thirds Democratic) fail to share their assumptions. The journalists in charge of one of the largest newspapers in one of America’s leading cities found it newsworthy and startling that government refuses to respond to a school shooting by instituting new restrictions on fire-arm ownership. Never mind that a series of studies from around the world show consistently that tougher gun laws fail to lower crime rates—and may even increase the levels of violence. Never mind that the citizens of the heavily Democratic State of Washington have always voted against gun control by crushing landslide margins whenever such measures turn up on the ballot. Washingtonians enjoy one of the highest rates of gun ownership in the country, and a violent crime rate well below the national average.

None of this matters to the media “idealists” at the P-I, who remain appalled and amazed that many politicians refuse to accept the illogical correlation between random incidents of crime and an immediate need for more limitations on legal, private ownership of fire arms.

In the same way that the Seattle reporter and editors take it for granted that most people share their yearning for gun control, they (and the rest of the mainstream media) never question the idea that all of America is celebrating the installation of the first ever female as Speaker of the House—regardless of her personal shortcomings or strident liberalism. The unmistakable bias in prestige reporting stems from shared, uncontested assumptions rather than conscious cooperation on behalf of a partisan agenda Conservative talk radio attempts to provide a corrective for the stories in major newspapers and magazines, and nearly all TV networks, not only by challenging some of the underlying beliefs of contemporary liberalism but by offering an alternative to the phony pose of disinterested, Olympian, above-the-battle objectivity. Talk hosts revel in the proud acknowledgment of our partiality and partisanship, and try to highlight the opposite predispositions in the purportedly unbiased news business.

Following Democratic victories in 2006, prominent journalists will find it even easier than before to uphold the notion that all right-thinking, honorable citizens share their liberal values. It therefore becomes more important than ever before for committed conservatives to challenge those attitudes, not only in media debate but at every water cooler, coffee shop, bar and grill, kitchen table, Little League game, church retreat and PTA meeting in the country. The untested, illogical, idiotic assumptions of contemporary liberalism—that gun control automatically reduces crime, that high taxes on the wealthy somehow help the poor, that more money for bureaucrats improves school performance of students, that radical changes in the entire basis for marriage show how much we cherish the institution, that easy termination of babies in the womb means more loving treatment for the children who make it through delivery, and that more reliance on the UN, the ACLU and our European allies will keep us safe from Islamo-Nazi terrorism – those pervasive postulates cry out for challenge and exposure.

Partisan bias will only begin to decline, in other words, when we make further progress in eroding and undermining the unspoken ideological consensus among the communications elite that continues to nourish the appalling, and presently pro-Pelosi prejudices of the prestige press.