Why Should the Middle Class Fight Tax Hikes on the Rich? 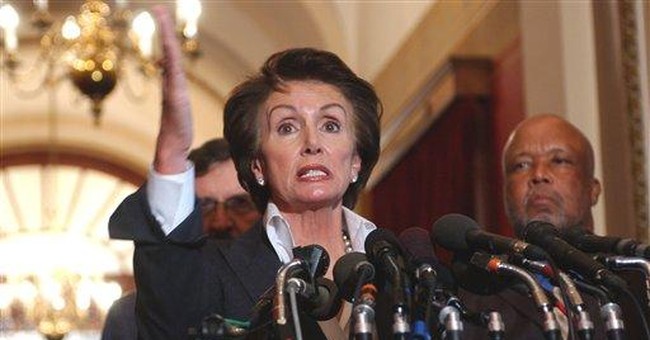 It took Nancy Pelosi less than a week as Speaker of the House to begin talking seriously about tax hikes. On “Face the Nation” on CBS this weekend she raised the possibility of increasing the tax burden (by “repealing tax cuts”) for “those making over a certain amount of money, $500,000 a year.” She simultaneously promised tax cuts “for middle class families.”

The political calculation in this pitch is diabolically clever, of course. Nearly all Americans consider themselves “middle class,” no matter how much or how little they make, so her support for reduced taxes for “middle class families” sounds wonderful. Meanwhile, less than 2% of tax returns show income in excess of $500,000 a year so the Speaker is, in effect, inviting 98% of the public to improve their status at the expense of a tiny minority that’s already widely resented because of its “excessive” success.

If you’re nowhere near that $500,000 level where the Democrats say they’ll start punishing you, why should you care if Pelosi & Pals jack up the tax rates on the fortunate few who can afford to fund the rest of us?

Actually, this question’s just as pertinent for me as it for most of the people reading this column since my family (alas) falls below that half-million a year threshold. Yes, I’m lavishly blessed with my job and I’m delighted to earn a great income that provides us with all sorts of privileges, but we’ve never approached the multi-million dollar income that many listeners (thanks to well-publicized deals for the likes of Rush Limbaugh and Howard Stern) associate with successful radio hosts.

In any event, the fact that I might manage to escape unscathed from Pelosi’s proposed tax increases doesn’t make me any less indignant at the idea that she wants to squeeze more from the most productive wealth-creators in our society.

Herewith, three reasons that even those who’ll never earn a half-million a year should oppose these tax hikes, followed by three powerful lessons from the current political situation.

First, the reasons that Americans at every income level should fight against a tax increase on any income level:

1) Tax hikes hurt the economy. Pelosi proposes to take money out of the hands of people whose investment and entrepreneurship create jobs, and to place it into the hands of government, which creates only job-stifling bureaucracies. The idea that federal officials will do a better job spending money than the people who earned it is not only offensive, but profoundly illogical. If Oprah Winfrey or Steve Jobs or Bill Gates makes a few extra million, that money won’t go into a mattress. It will either be used to start new companies or invested somewhere (driving the economy and producing new jobs), or spent on even more lavish mansions and yachts (providing new, well-paid high end jobs in design, maintenance and construction) or go to charities designated or designed by some of the most successful people in our society. The government never makes money; it only takes money, and then spends it. The evidence that Washington, D.C. bureaucrats can spend the bucks more effectively and productively than private money-makers is non-existent—which is why major tax-rate cuts in the Coolidge, Kennedy, Reagan and George W. Bush administrations have all produced economic booms. The idea that higher rates for the super-rich would mean lower rates for the rest of us is naïve, to say the least. Even if governmental officials meant to send all the new money from tax hikes “back to the people” in the form of middle class tax cuts, they’d still need to pass those funds through the D.C. meat grinder—and big chunks of all such pass-throughs inevitably get stuck on the blades of the bureaucracy. No government program sends 100% of the funds assigned to it to the intended beneficiaries. The only guarantee when dollars make their way to Washington is that some of them—sometimes most of them – will end up staying there to pay the costs of administration and overhead. .

2) Higher rates are ineffective in producing higher revenues, and encourage both laziness and sleazy strategies of tax avoidance. Obviously, the higher the tax rates, the more the incentive to dodge taxes. In Russia, where Putin experimented with a flat rate of just 13%, the cynical tax collectors found themselves amazed by the tidal wave of new revenues from productive people who had previously avoided paying their taxes. Contrary to most liberal predictions, the Bush tax cuts of 2001 and 2003 led to a vast increase in revenues, which has already resulted in cutting the deficit in half. Raising tax rates on the rich, on the other hand, gives an incentive to hide money and to practice tax avoidance to precisely that segment of the population that’s best able to escape their responsibilities – thanks to expert (and expensive) advice and financial flexibility. Higher rates also encourage people to invest their time in devising elaborate schemes to avoid taxes, rather than working hard to earn more income, produce more jobs, and create more wealth.

3) High tax rates are wrong and unfair – and only lead to the growth of government. When pollsters ask the public about the highest tax rate that seems fair, a majority of Americans suggest 20% -- or less. In other words, even many people who will never pay the highest rates recognize and acknowledge the essential injustice of confiscating more than a third of what individuals earn. At the moment, the top rate claims 35% -- down slightly from the top rate under Clinton (39.6%) but still up substantially from the low rate under Reagan (28%). By and large, we want our most talented and productive fellow citizens to work as hard as possible, because we understand that their efforts benefit the rest of us. Whether their excellence involves building companies, or directing movies, or throwing an unhittable slider, we understand that part of the reason they do what they do is to earn financial recognition and reward. We also understand that the best way to measure the size of government is to measure how much of private productivity that government consumes. If your boss takes back 90% of what you earn, then it’s not outrageous to say that you’re a slave and he’s your master. When the federal government used to impose a top tax rate of 90% that made the highest earners theoretical slaves to government – no wonder that they rebelled with all sorts of loopholes and tax dodges to escape that slavery. If the government takes 35% of your productive efforts, you’re still a slave for one third of the time or one third of the year—working hard to benefit others, not yourself. The great majority of Americans understand that a federal bureaucracy that can claim one-third of our efforts and one-third of our time (before we even start worrying about state and local obligations) has grown too large, too intrusive, too powerful to co-existence with free people and the ideals of liberty.

These arguments – the very core of conservative thinking – continue to make sense even to tens of millions of those who never expect to make their way into Pelosi’s target category of the guilty rich.

And what can we learn from the current political mess in Washington? Three quick lessons:

1- There really is a big difference between Republicans and Democrats. Forget all the whining (going back to notorious Democratic demagogue George Wallace) about “not a dime’s worth of difference between the two parties”, about “Republi-crats” and “Dem-icans” counting as interchangeable: within one week of Democratic takeover, the leadership of both House and Senate is talking about tax increases. In the twelve prior years of Republican rule no major leader of either GOP-controlled house of Congress talked about jacking up tax rates. If that doesn’t demonstrate the unbridgeable chasm between the two parties, nothing will.

2- Despite Democratic claims to the contrary, Republicans are unmistakably motivated by concern for the public good rather than efforts to protect their own bank accounts. Only a tiny percentage of GOP leaders, activists, volunteers, or talk show hosts would suffer by a tax increase limited to incomes above $500,000—yet Republican opposition to these increases is nearly unanimous.

3- The biggest issue with the tax system should be tax simplification, not increasing or even decreasing rates. Tax debates always sound confusing to the American people because they are—the IRS Code, with its multitude of loopholes, mountainous volumes of regulations, Alternative Minimum Taxes, differential rates for capital gains and ordinary income, FICA, payroll deductions, earned income tax credits, and so forth, is vastly more complex than it needs to be. Each one of the regulations and special programs and specific obligations represents some governmental attempt to take tell people what to do and how to live, to expand the power of bureaucrats into every intimate corner of our homes and places of work. Republicans will begin to rebuild our majorities by emphasizing RADICAL, corruption-reducing tax simplification (either a Fair Tax on Consumption or a Flat Tax on Income) rather than merely reduced rates.

Unfortunately, the needed efforts at heroic reform – like Hercules himself cleaning out the stinking, wretched, filth-encrusted Augean Stables – must wait until Pelosi’s instinctive passion to raise rates has run its course and the GOP regains its majority. Meanwhile, we can only hope that in terms of fighting once again on this particular battlefield we can re-unify our dispirited troops and regain the clear voice of Reaganism. It’s a new year and a new struggle, and it may yet produce new energy and fresh hope.