Kerry Will Go Down “Swinging” in Round Two 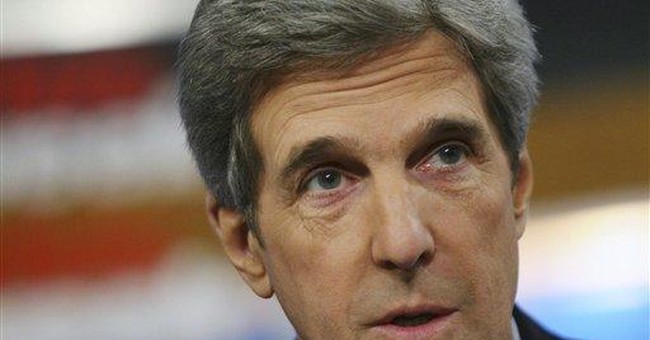 Naval Aviation hopefuls are trained to box. The Navy is not really trying to develop the next Mike Tyson, but they have a specific purpose for this training and it serves its purpose.

The boxing program is designed to test three things about the flyboy wannabes; their response to training under duress, their physical fitness, and their mettle. All of the qualities that it takes to be a viable aviator in combat, post-shoot down survival, or life in a POW environment.

For anyone that has boxed, jab-jab-hook is as easy as it comes on the heavy bag or in front of the mirror, but throw in a couple of rounds of shuffling around the ring, and take a few shots to the brain/housing group, and jab-jab-hook becomes more like walking a tight rope in a hurricane. The brain knows what it wants do, but the ability to physically respond to its commands cannot be overcome because of exhaustion, disorientation, and the cumulative toll that blows to the head have over time.

Does the candidate react instinctively with trained responses? Did he cover and jab? Counterpunch? Move along angular lines rather than straight lines? Was he able to absorb the training and translate that directly into calculated action while under duress?

Is he physically exhausted too soon? Simply put, does the candidate have the physical capacity for the rigors of flight and its potential consequences?

Does he have the gumption to punch back? Did he quit rather than fight back? What is his true mettle?

It is the exhaustion and confusion inherent in boxing that bares the true soul and mettle of the boxer. Or in this case, determines if the aviation candidate has the skeletal structure and fortitude necessary to become a viable part of Naval Aviation as a pilot or crew member. If you swing at a Naval Aviator/NFO/Crewmember, expect them to return the favor.

Right away, not four years later.

The Oregonian thought enough of John Kerry’s acceptance of the T. Boone Pickens Swiftboat Challenge that they chose to run an editorial bolstering Kerry in his endeavor this past Saturday.

“So bravo, finally, for John Kerry. Beyond any doubt he served this country bravely as a Navy gunboat officer in the Vietnam War, and it's about time he stood up for himself.”

Pardon another boxing analogy, but isn’t that a bit like swinging from your hospital bed after being knocked out in the first round? Nothing will come of John Kerry’s belated and limp counterpunching of the Swiftboat ads. And here is why:

1. John Kerry has always had the power to clear up any of the Swiftboater challenges; all he had to do is allow the Navy to distribute unaltered copies of his service record, medical records, and DD214. It is essential that these records come from DOD, so that they cannot be tampered with by Kerry or his supporters. The DOD copies are the true copies of record and the only viable evidence for these matters.

John Kerry has always had the power to end the “Swiftboating” by releasing credible documentation, if it exists. He has waited so long in swinging back that it is unlikely that any credible evidence exists to refute the base charges of the Swiftboaters.

If any of my ex-squadron mates dumped on me like the Swift boat vets are dumping on Kerry, my records would have been available the next day- that is a counterpunch, not a duck.

2. Kerry will not want his combat wounds scrutinized in the public forum. Compared to the wounds that our servicemen are sustaining in Iraq and Afghanistan, and compared to the desires of many to return to combat, Kerry’s Purple Hearts and subsequent request to be withdrawn from combat duty will reflect poorly on his personal courage compared to today’s warriors, as it should.

If Kerry thinks long and hard about that, he will not welcome the comparison, and indeed, avoid it at all costs.

I am not saying he did not “earn” his Purple Hearts, but his behavior in garnering them and his behavior subsequent to the issuance of the third, will pale in comparison to what many a Lance Corporal is doing today – overcoming severe wounds and volunteering to be re-assigned to a combat unit. Kerry doesn’t want to rub too close to that.

3. There is no knowing if the Swifties are out of ammunition. I suspect they only fired what they needed to have the desired effect on target. Once it was clear that Kerry was not really shooting back, they ceased firing and let the issues lie where they may. But that is not to say that they were out of ammo, or that they had even brought in their big guns. In combat that is known as fire discipline. In boxing it is known as not “punching yourself out.” Kerry has no way of knowing where this issue will go next, and unless he wants to take a chance of ending his mediocre political career, he should let sleeping dogs lie.

4. How is a $1M donation to charity a bigger incentive to “clear the record” than being the Democrat nomination for the President of the United States? There cannot possibly be any more compelling reason to clear up any misconceptions about one’s record than running for the highest elected office of the land and the most powerful governmental post on earth. Only a few handfuls of Americans have earned their Party’s nomination for President, and Kerry should be able to give some of Teresa’s money to charity at will, so after four years of letting the Swiftboat allegations solidify in the public mind, it speaks to his mettle that he did not swing back harder and with crushing accuracy. Anyone seeking the weight of the office of the President of the United States should have the fortitude to fight back in a timely and determined manner. His desire to run for President should have been enough of a motivational force to clear the record immediately and with the full ferocity of his personality.

Come to think of it, maybe he did that.

I think that Kerry is really hoping that the general malaise about him and this issue will allow him to “counterpunch” without really having to produce any evidence. He is hoping that in the public’s current antipathy for him, he will be able to “clear the record” through the mere “acceptance” of the T. Boone Pickens challenge alone, whether or not he ever takes any action moving forward.

As with most Dems, Kerry gets a free pass with the MSM on his political inconsistencies and the spotty documentation of his “public record,” so it would be no surprise that he would relying on his cornermen in the MSM to carry his water in his new fangled counter-attack. This would commonly be known as Oregonianboating, ABC-boating, CBS-boating, 60Minutesboating, NBC-boating, Datelineboating, etc, and et al.

Kerry will produce no new evidence, but the MSM will gladly recall this effort as the “counter-attack that cleared his record.”

Who knows, T. Boone may even get Ratherboated as part of this new Kerry offensive.

Most people recognize that the truth lays somewhere between what the Swiftboaters claim and what Kerry claims. What is also clear though is that swinging back four years later, will not clear the decks of this issue entirely. For Kerry to do that he HAS to have DOD release the entirety of his record for full public scrutiny. Only then will we know if his reputation has been diminished by a Swiftboating, or overly enhanced by MSMboating.

Whatever comes of it, we certainly know Kerry is no boxer. If he pursues this, I predict a second round knockout.