Infrastructure- the Other White Meat 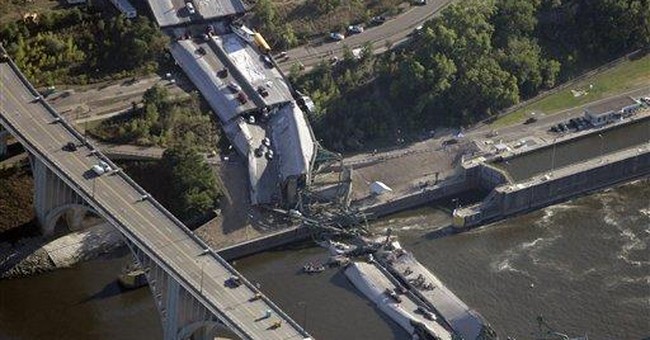 Substitutions almost never ruin a dish, and savvy substitutions can greatly improve on a classic.

But I have never tried to substitute a tuna steak for a cutting board. Or a watermelon rind for a stock pot. Or a bunch of carrots for a Kitchen Aid mixer.

Or a pork tenderloin for a Chef’s knife.

But sadly, decades of legislative substitutes, a.k.a. pork, have brought our national infrastructure to the current pitiful state that has thrown Minnesota deep into the throes of tragedy. And while it is way too early to asses any blame in the Minnesota tragedy, it is important to have a discussion about our political priorities and what should be the national objectives for each Congress in their biennial sessions.

This week’s bridge collapse highlights how valuable our infrastructure is to our national commerce. The bridge collapse will snarl automobile traffic well out into the foreseeable future, impacting productivity of workers, consuming more fuel for commutes, and likely diminishing commerce for the short term. It has disabled barge traffic on that length of the Mississippi, and will likely impact farmers up and down the river causing loss of product or increased shipping prices. Rail lines along the river were cut, having the same effect on the transportation of goods, and the cost of getting product to market.

This one event is a microcosm of the interdependencies that our economy relies on to sustain its momentum. And we have done scant little about improving our infrastructure in decades. This is a bi-partisan failing.

Inspections are no substitute for repairs.

The computer that your automobile repairman uses as a diagnostic tool does nothing to repair the defects in your car. It analyzes the data, and efficiently points the repair technician in the right direction – shrinking troubleshooting times and reducing overall costs. But the requirement for action still rests with the car owner. Years of inspections will not ultimately prevent failure. At some point in time water pumps must still be replaced, brake pads and rotors changed, and tires changed.

Inspections are designed to focus action. In today’s State and Federal legislative sessions this concept seems to have been forgotten. Inspections are apparently a tool for delaying action rather than taking it.

Pork is no substitute for legislation.

The Oregon Senate “accomplishments” for the 2007 session just ended, lists, “crackdown on tax cheats,” domestic partnerships, tax breaks to movies shot in Oregon, legislation against metal theft, preservation of our vistas by limiting the use of billboards, and on and on, as highlights; but there is no mention at all, of bridges – even though Oregon has 645 bridges that are “structurally deficient.” I suspect most other states are no different.

And we know for a fact that the Federal government is not. Porkbusters has a comprehensive listing of Federally raised pork. How many transparent “foundations” does it take to employ a Congressman’s entire family? How many buildings in West Virginia can actually bear the name of the same man before confusion dominates? And instead of building bridges that connect fifty people to 9000, maybe we should be repairing bridges that serve a hundred thousand a day.

It is this kind of bi-partisan legislative ineptitude and waste that becomes an anathema to voters and taxpayers; particularly in light of the avoidable travesty that occurred this week in Minnesota.

In true Congressional fashion, and in particular, what are turning out to be the hallmark of the Reid/Pelosi congress, there will be countless hearings to determine who is responsible for this tragedy. Engineers will be scrutinized. Inspectors will be vilified. Mid-level managers will be reviled and lambasted. Governors and mayors will lament.

But the true blame lies with lawmakers at the State and Federal levels, who continue to value their real estate holdings within the hallowed chambers in which they serve, more than they do the lives of their constituents.

Voters need to begin to cull the current field of politicians and replace them with men and women who are focused on providing for the true needs of their constituents – public safety, education, national security, responsible spending, and reliable infrastructure.