Pass Social Security Reform; Then We Can Leave Iraq 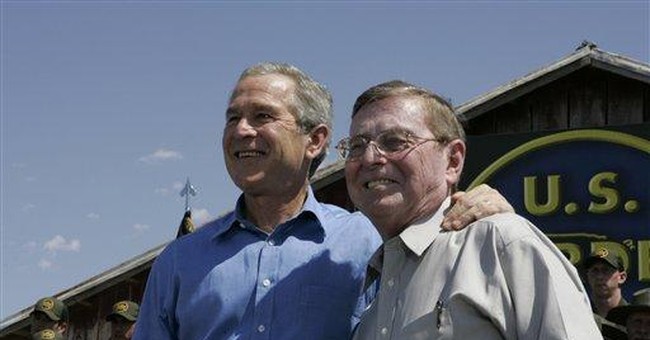 Irony. “The essential feature of IRONY is the indirect presentation of a contradiction between an action or expression and the context in which it occurs.” Exactly.

Which is why the timetable for leaving Iraq should be tied to the exact date that Social Security reform can be passed by our ponderous legislative bodies.

I find it rich beyond the pale that our Congress is lecturing lawmakers in Iraq, when they have yet to take a bite out of the biggest legislative challenge that will face our country over the next 35 years.

They must feel plenty righteous in lecturing members of the Iraqi government about lethargic action and lack of resolve, since they have failed to move a millimeter forward in dealing with Social Security (in)solvency.

As a member of the prestigious US Congress it must be easy to criticize a legislative body that is only a few years old; one that is attempting to construct a democracy out of the ashes of a generation of repression and dictatorship. Never mind that Iraqi lawmakers do their necessary work under the constant threat of attack and terror; or that compromises must bridge thousands of years of tribal history and distrust; and that failure will certainly lead to the death of millions, as certain as it did in Southeast Asia after our politically motivated, precipitous withdrawal. A withdrawal forced by the political machinations of our esteemed Congressional bodies.

Our representatives’ biggest fear is that they will be forced out of Washington D.C. by their constituents before they become blabbering nonagenarians or before they are able to rot in the opulence of their Constantine desk chairs. Eventually this sympathoadrenal response results in the abandoning of all principles to the point where our representatives begin to speak a language that is completing unintelligible, and incongruous to all logic. Including this indiscernible Pete Domenici classic as spoken to Wolf Blitzer and mined by Hugh Hewitt,

“WB: Here's what you said the other day. I'll read it to you and make sure it is an accurate quote: "There's nothing to wait for. Everybody that has any knowledge of the reports would indicate that they are not going to show any degree of a big change that we needed and we are just wasting time." What do you mean "We are just wasting time?"

PD: This was put to me in light of "Why are you making this announcement today?" when I made it. "Can't you wait a while to make it?" And I said there's nothing to be gained from me, Senator Pete Domenici, announcing my frustration and my willingness to change directions in this war. I'm not going to vote for any of the Democratic proposals that say we are getting out tomorrow or that we're getting out next week. I'm waiting, but I am ready.”

I am a little unclear here, but what exactly is going on in the Iraqi Parliament that is not going on in our own House and Senate?

Today’s interim report has some good news and some reason for hope. It is certainly enough to go forward on, even past September when the full six month report is due. With all that has been sacrificed to this point, and all that is at stake in terms of Iraqi lives, certainly we have the capacity to cultivate enough national fortitude to press on towards a goal that is measurably within sight.

Many will use the context of the Initial Benchmark Assessment Report to maneuver the full burden of success fully and squarely onto the backs of the Iraqi Parliamentarians, and surely much of the future rests in their hands; but gross and unapologetic politicking for defeat while we are beginning to see the prospects of ultimate success on the horizon makes little sense and should be rejected for the rubbish that it is. No respect intended.

So, I conclude that we should pull out of Iraq, just as soon as the Congress can report via the Initial Benchmark Assessment Report on Social Security Reform that they have eight benchmarks on track. Absent that they should do exactly as the President asked…

"I don't think Congress ought to be running the war. I think they ought to be funding our troops."

In other words, do your jobs so others can do theirs.