Mythbusters: A by-product for the logically inept 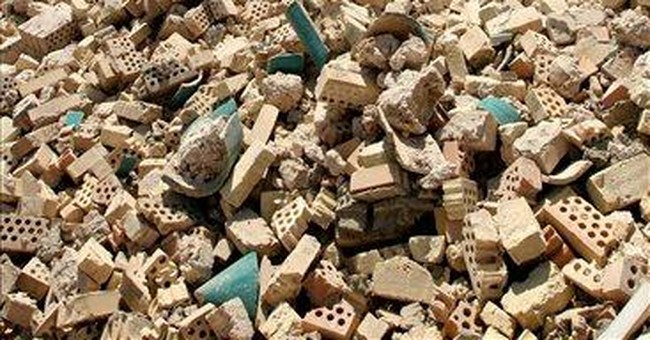 Victor Davis Hansen wrote an extremely important piece last week on D-Day. As the preeminent historian of our time, he reflected on D-Day and he legitimately highlighted, in spite of all of the hype about its successes, that on many levels D-Day was not the huge success that it is acclaimed to be. He cites failed topographical analysis, the ultra-human expectations that planners demanded of tactical units, and the everyday confusions and cross-ups that occur in major operations. He reminds the reader of the realities of the day, and that the utter randomness of combat can make a slot machine look like a sure thing.

His message was that the trial and tribulations we are experiencing in Iraq do not sit in solitary isolation in our military history, but that they may indeed be more indicative of our military operations than we either know or care to believe.

In short, he did not sugar coat the ultimate success that was D-Day by leaving out the bad parts. He did not hide the horrible miscalculations of the day in the bright light of our ultimate success. He leaves the reader with the reality of D-Day, not the lore, not the myths. It was published in the Papersaurus edition of the Oregonian last Saturday, a shock in and of itself.

And because it ran here in Portland it was no surprise that on Sunday, many readers responded with letters to the editor. The first line of one caught my eye,

“Our military has not suffered many debacles in its history…” It went on to explain how our effort in Iraq was, by far, the worst political and military debacle in our history.

I was reduced to mouth-breather for several minutes; perhaps I damaged my jaw when it hit the counter. To the non-historian, to the non-military student, to the casual observer, to the blind partisan, to the unstudied, to the myth believer, this may seem true; but it is false on dozens, if not hundreds of counts.

- The first two years of the Civil War failed to produce one strategic victory for the Union forces. Until the victories at Gettysburg and Vicksburg, which occurred just a day a part, the Union armies could claim no important victories. Even on the heels of the Gettysburg victory, General Meade horribly failed to exploit his victory, likely extending the war by a year or more. If not for Joshua Chamberlain’s fortuitous and timely arrival at Little Round Top, and his unit’s determined charge into the face of an equally determined rebel force, Gettysburg may not have been a Union victory at all.

- The unmitigated disaster of Pearl Harbor can hardly be called anything but a debacle. Nearly all of our assumptions about warfighting, except for Naval Avaition and amphibious warfare, were proven archaic and out-moded by the summer of 1942.

- The performance of our combat units early in the Korean War reflect an over-confidence bread from the successes of WWII, poor training and discipline within the services following the close of WWII, and our continued prejudices against the abilities of the Asian warrior. The result was the Pusan Perimeter, and our nearly losing the Korean peninsula altogether. Unparalleled retreats marked the movement of American forces down the length of the Korean peninsula.

In fact our military history is replete with examples of incompetence and folly, but we have generally overcome our deficiencies by adapting to the situation, applying competent leadership to the effort, and using our vast resources in support of our efforts, which was VDH’s larger point.

His column drew another ponderous missive today. Submitted by yet another brilliant Oregonian reader who viewed the “classicist’s” piece (even though he admitted to not knowing what a classicist is) as a shill for President Bush, and he supported this assessment with his own illustrious background as a “news junkie” and pop culture artist. He completely missed VDH’s point on the errors of D-Day as compared to our tactical and strategic errors in Iraq and he concluded brilliantly, and categorically, that our entry into Iraq was dissimilar to our entry into WWII. Thanks for that valuable clue.

I guess it takes a classicist to understand one.

Today’s letter, combined with his compatriot’s miss a week earlier illuminate our ever increasing belief in lore, pseudo-history, and shallow pop-analysis.

We have become a nation of Cliff Note reading news junkies that absorb the biased and unstudied drivel that passes for news in this country, and give it the same credence as if it were the scientific writings of Albert Einstein. We have come to view Oliver Stone and his fictional construction of history as the modern equivalent to the libraries of Alexandria. We gravitate to the unproven and illogical, at the very same time we reject the studied reason of a “classicist” as if it were the remnants of partially chewed Cheerios spewing from the mouths of babes.

Our gravity towards the false or unproven is seen in the success of US, People, The Enquirer, the Brit tabloids. We lap up gossip and paparazzi driven “news” and other trivial events as if they have some meaningful impact in a world where terrorists continue to threaten to kill us at the next opportunity, and an insane leader of a country seeking nuclear weapons promises to use them if he can complete development. We see gaps in information as full blown conspiracies. We accept a trip to rehab as some kind of reputation rehabilitator instead of the grueling withdraw from addiction that it should be.

We have become a nation of the un-studied and easily duped. We skim the surface of educational opportunity and fail to leverage it into a true education or real knowledge. We accept top level analysis and fail to want to understand the underpinnings of the underlying conditions in our efforts to find true pathways to workable solutions. Our Congressional leaders don’t read the National Intelligence Estimate.

We have become so ignorant and gullible that we need a TV show to prove that you can’t electrocute yourself by “peeing on the third rail of the subway train,” or that no one probably flew to the moon with a rocket pack fueled by carbonated beverages and Alka-seltzer, and that there are no traces of urine in Corona beer. We have become a world of un-educated dolts with a propensity to absorb trivia, illogic, and pure fiction at a rate that that neither the Mythbusters nor VDH will have much success in slowing down.

The result will be a monumentally weak electorate that will put this nation on a wandering, if not entertaining, path downhill and on its way to its eventual demise. For if nothing else, democracies are dependant on a responsible, educated, and informed electorate, and we appear to be on the verge of supplanting ours with Paris obsessed, culture fueled, intellectually lazy, Twinkie-like spongebots that are incapable of logical thought and reasoned decision making.