Advice for the Democrats on Iraq 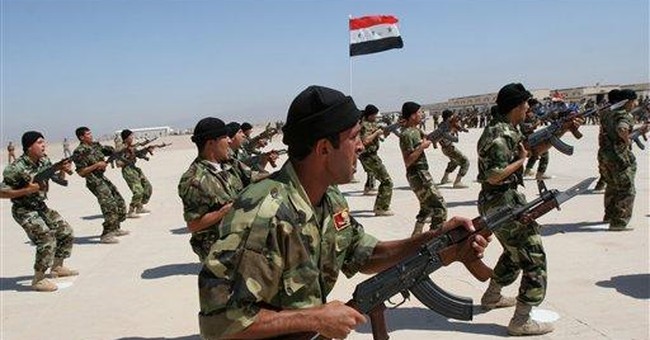 I would like to take a moment to compliment Spencer Ackermanon a particularly sane piece written about published online at the WashingtonMonthly.  Although Spencer has leftleaning credentials, he has written a balanced and tempered piece that givesexcellent advice to the Democrat Presidential hopefuls.

His main points are that:

-Our gains in will be modest and limited going forward in .

“…but the overall level of violence in the city, in theform of assassinations and bombings, has remained unchanged, prompting a UnitedNations report in April to criticize the Iraqi government for withholdingcasualty statistics that might undermine faith in the security plan. Outside of, brings encouraging reports suggesting that al-Qaeda is alienating Sunniinsurgents. What’s also emerging, however, is that many have turned againstal-Qaeda for now in the name of prosecuting a better insurgency against the later.”

-And while we are, in some ways, buying time for the Iraqis,they are squandering the time we buy by focusing on inter-faith squabbles andrank politicization of their fledgling constitutional process.

“To help the process along, the has pushed measuresfor sectarian compromise, including a change in distribution of oil revenues, alaw permitting low-level Baath Party officials back into government,constitutional reform, and a new provincial elections law. But the Iraqicabinet and parliament, whose dominant Shiite factions are more interested inpressing sectarian advantage than reconciliation, have either slow-walked themor neutered their substance.”

-That the Dems and the Dem Presidential candidates are allrunning on getting us out of quickly.

“The Democratic Party, fresh from its wins in the midtermelections, understands this. It has finally united around a position on thewar: it must end. This spring, Congress passed legislation for supplemental warfunding that mandated withdrawal from by the spring of 2008.President Bush, as was expected, vetoed it.

On the merits ofwithdrawal, the Democrats have it right. The politics of it, however, remaincomplicated. It’s become common among Democrats to argue for withdrawing from in thename of the troops. In January, for instance, New York Congressman JerroldNadler introduced a bill titled the Protect the Troops and Bring Them Home Act.In February, Congresswoman Lynne Woolsey sent a letter to Bush arguing that itwas “time to truly support our troops—by bringing them home.” Fifteen membersof Congress signed on. Senators, too, have been willing to support this idea.Senator Barbara Mikulski of said in aFebruary floor speech that “the best way to support our troops serving in is to say ‘NO’ to the president’s escalation of the war.”

-That the military, particularly those engaged on the groundin Iraq, are not willing to give up so easily, and indeed will come to resent(if they don’t already) the fact that the Dems are packaging their “support” ofthe troops as withdrawal from Iraq, a course of action the troops will come tohate and despise; thus further isolating the Dems from the military.

“There are other signsthat the military has a different view of how things are going: troops deployedto haven’t been voting with their feet. While National Guard units are havingtrouble meeting recruitment goals, and the active-duty forces are havingsimilar difficulty with certain key specialties, reenlistment rates in themilitary in general remain surprisingly robust after four years of the war. The4th Infantry Division and the 101st Airborne Division, both of which spent 2006in Iraq for the second time, had post-deployment retention rates of 124 percentand 136 percent of their respective targets. Despite a significant rise infrustration inside the military as the war has dragged on, there remains asizeable base of support for the mission.”

“Most important, those in the military will be the lastpeople to believe a war is lost, even in the face of nearly impossible odds.Losing a war is almost never the fault of soldiers but, rather, the fault ofpolicy makers and generals, but regular soldiers still feel implicated.

“The uncomfortable reality is this: nothing in worth fighting for remains achievable, andnothing achievable in remains worth fighting for. Democrats have made the decision—rightly, Ithink—that withdrawing from is the least bad of many bad options. But they shouldn’t kid themselves intothinking that a majority of the troops doing the fighting agree with them.”

-And lastly that the Dems need to re-package their messagefrom one of “support” to one of understanding the military’s desire forvindication and victory, but conjoined with the reality that any furtheractivity in is a waste of effort and lives.  And thatthe Dems must have to courage to communicate this clearly to the troops byrefining their messaging to the military in a manner that is more respectful ofthe military’s persona, drive, and commitment to purpose.

“Elected officials, however, have to judge what theybelieve to be in the national interest, and that means calling an end to theoccupation of .Soldiers like Wellman won’t agree, but if Democrats can at least signal thatthey acknowledge and respect his point of view, they’ll have a better chance atgetting Wellman to respect their own. And meeting partway is a lot better thannot meeting at all.”

Read the entire piece. Spencer makes a compelling case in the formulation of his advice for Demcandidates, and indeed for the entire country, should we get to the point thatour troops are withdrawn without evidence of a definable victory.

But Spencer draws his conclusions with a myopic view of isolatedfrom the rest of the global offensive against Islamist extremists.  There may come a time when the US withdrawsfrom Iraq without clear or measurable indications of “victory,” but now is notthe time to begin an isolationist withdrawal when we have extremists currentlyengaged on at least five fronts, and are rolling up their disparate networksworldwide.

A slackening of our efforts in at this time will only addfuel to the global extremist efforts, and allow them to focus on gaining largertoeholds worldwide.  Insurgents arecurrently engaged in , , ,the , and .  To let up now would only give extremists timeto re-distribute, to re-organize, and likely to achieve some successes wherethey are now bogged down and over-extended.

Spencer is right, if we withdraw, we need to figure out away to separate the effort of the troops from the efforts of our generals andour civilian authorities.  His advicehowever comes way too soon.