Defining the Global War on Terror 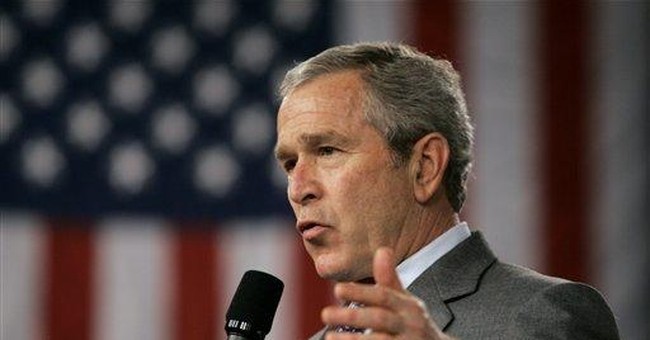 Wars have always had their discernable differences. Some extremely nuanced, some extremely dramatic. Strategists have been able to draw on tactics and strategies from previous wars or engagements and adapt them to modern principles and equipment. Other wars have demanded radically new or deeply evolved strategies and tactics to overcome or leverage operational developments and tactical and strategic shifts.

Had the Allies not perfected the complex, integrated tactics of amphibious warfare, first attempted in the modern age at Gallipoli in World War One, they would have not been successful moving across North Africa, Italy, Europe, and the entirety of Asia in defeating the Axis powers in World War Two.

Carrier warfare was birthed, developed, mastered and integrated into our national strategic plans in less than twenty years. It changed the face of naval warfare forever.

In its simplest form, World War Two was an engagement on two foreign fronts, a modest defense of the homeland, sustaining of supply and logistics lines, and propaganda (support) effort at home. Fought successfully on all five above fronts, the Allies could be expected to defeat the Axis and claim victory.

The Cold War was fought remarkably different. It was fought with weapons development, brinksmanship, and propaganda, occupation of territory, political alignment, time, and economics. In the end, the winning of the Cold War ended up being a strategy of containment, economic depletion over an extended period, and the capability to project a ready and competent response to attack.

It is critical to outline the broad fronts in the Global War on Terrorism in order to lay out a competent, long-term strategy for victory. The fronts that we must engage on, and win on, in order succeed against terror are as follows…

The war in Iraq must be sustained until either Al Qaeda is defeated, they abandon the battlefield in Iraq, or the combination of Iraqi armed forces and Iraqi police forces can provide stability in the country, from both internal and external pressures. Al Qaeda cannot be “given” a victory in this battle. They will not go home if they successfully force our withdrawal and claim victory in Iraq. They will simply test our strength and our will in another spot on the globe, using any uncontrolled areas in Iraq as training grounds.

The effort in Afghanistan must be continued until the Taliban is no longer militarily or politically viable in Afghanistan. As with Al Qaeda in Iraq, the Taliban must be denied even the smallest influence in Afghanistan. The remnants are a nuisance, and they occasionally enjoy some success on the battlefield, but we have already experienced life under the threat of a terror enhancing regime in control in Kabul. Terrorists would have unrestricted access to training and support, and economic viability via the opium trade.

Forces must remain in place which promote long term stability, and a denial of a resurgence to the Taliban.

Iran must be denied the acquisition of nuclear arms at all costs. We know that the mullahs, via Ahmadinejad are incapable of rational, international intercourse, and that their objective is to enhance their status in the world through the successful development of nuclear arms.

They have proven themselves exasperatingly irrational over the past twenty-eight years, and in adding a nuclear capability to their arsenal, they would only attempt to twist the rest of the world to their influence through an unspoken, yet inherent threat to use nuclear weapons in order to achieve their political objectives.

Iran is the main backer to Hezbollah, and their myriad of terror activities, it is a logical step for Iran to let aggressive, semi-rogue terror groups to do their nuclear bidding for them. Certainly, Iran would arm their surrogates with nuclear weapons, and then the world would become a free-fire zone for nuclear detonations.

The US must aggressively pursue coherent and responsible immigration and deportation strategies that add to national security. Borders MUST be controlled to the extent that we know, for certain, who is in this country and under what pretenses. We cannot protect ourselves against Al Qaeda mimickers, if we do not have a rational understanding of who is in this country and for what purpose. This requires a serious and immediate action. Failing to plug this gaping hole in our national defense is a symbol for our collective malaise toward our own security and will make us vulnerable into perpetuity should we fail to take appropriate action…control the borders, enforce current laws, deport immigration rules violators without exception, aggressively pursue those here illegally.

Continue with aggressive domestic and international screening of airline passengers. Through diligent and continued screening we re-enforce the idea that we have not forgotten 9/11, and that we are aware enough to continue to provide some measure of security to intra- and international travel.

We must aggressively step up our screening of cargo containers entering into this country. We must have an understanding of what is in each and every container that comes through our borders. Certainly this will take some time to fully make operational, but we must continue on the path and complete this critical piece in the continuity of our effort to protect ourselves from further attack.

We must begin to develop a much improved working relationship with moderate Muslims. Because of the violent nature of Islamic terrorists across the globe, it is easy to understand the reluctance of some moderate Muslims to step forward and support governmental initiatives in the anti-terror campaign. We must be able to ensure the physical security of moderate Muslims who assist us in our goal to eliminate terrorism.

We need to work with moderates to gain access to networks that harbor or fuel insurgents. We must cultivate them for long term roles as operatives, analysts and interpreters. In short, we must engage moderate Muslims in our effort to eliminate terror, and be prepared to take extraordinary measures to ensure their physical security. The combination of cooperation and protection will begin to break down the existing barriers that are keeping moderate Muslims on the sidelines.

Key elements of the Patriot Act must remain in place in order to ensure that our domestic terror prevention efforts shift away form the “lucky” and are driven into programmatic success. By limiting access to banking, billing, internet, cell phone records, and other predominate terror pathways of communication and exchange, we hamstring our efforts, and reduce our chances of programmatic success, and shift back to a dependence on luck or fortune.

We will not always be presented with fidgety drivers crossing over from Canada, or copy-cat cells stupid enough to take their training videos to Circuit City for conversion to DVD. At some point the strength of our domestic counter-terror programs must be unearthing these plots, and we must diminish our dependence on stupid terrorists and heads-up store clerks.

We must actively begin a communication program that highlights how important citizen involvement has been in protecting us from further attacks. A concentrated media campaign should be a base element of our public information dissemination well out into the future. This campaign, should resemble the Civil Defense ads of the fifties, and alert our citizens to the very real threats that are beginning to infiltrate our neighborhoods, as these “home-grown” Al Qaeda-like cells begin to gain a toehold on our home turf.

We must deny any terror organization the initiative in Information Operations. We must recognize that their objective is to operate inside our information OODA-loop and to co-opt our media outlets. They will continue to leverage the format and content of the evening news to gain air time and to present the images they want to the American public.

We must be aggressive in countering these messages, and devise a coherent and innovative strategy to deny them the unfettered use of our airwaves in this critical element of the GWOT.

Political agreement to these principles

None of the above will work, until there is a bi-partisan agreement to this approach in fighting the GWOT. Each and every time we waver in our effort, the enemy views our divisiveness as an offensive opportunity.

Al Zawahiri is giddy in Iraq at the possibility of the Dems setting a timeline. They operate more freely when we relax our surveillance of bank transactions or incoming cell phone calls. Until both parties can agree to this list as the fronts of this war, we will have no chance of winning it…no matter how much money we spend, or how much energy we expend.

The GWOT is mature enough that a strategic review of our methods and objective is called for. And while this list may not prove to be all inclusive, it is certainly the baseline for achieving success in the long term.

If we can’t figure out, or acknowledge on which fronts we are fighting, we are doomed to be engaged in a long, losing struggle to terror. If we are able to put together a comprehensive fight on all of the fronts described above, we are in for a long, winning struggle against terror.