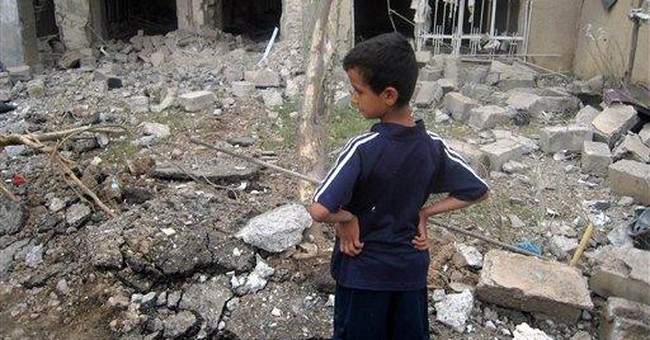 Conventional wars are tests of nations. It is manpower versus manpower. Logistics versus logistics. Lethality versus lethality. Mobility versus mobility. And the nation with the most advantages across the spectrum usually wins. Typically, the one better at all of the combined elements of modern warfighting claims victory.

Typically insurgencies are birthed from moral ideologies. It is not hard to see the morality in an uprising against perpetual colonialism. It is not hard to imagine an insurgency against oppression or forced imposition of religion. In fact, it is easy to support a cause rightly rooted in moral virtue. Insurgencies born of high moral standing will have strength and longevity. And they will be hard to defeat.

Insurgencies born on immoral premises will be only slightly less difficult to defeat because support is not gained through a moral belief, but through intimidation and random violence against the innocent. Over time, the immorality of indiscriminate or ruthless tactics will provide a tactical gap for exploitation. So defeat of immoral insurgencies, while still difficult, is more likely because the base of support will not be as well grounded.

Modern insurgent tacticians have garnered much from the patient nationalist insurgencies of Southeast Asia. They recognize that to win with inferior numbers, it takes a combination of time and high-yield tactics. The Vietnamese patiently waited out the French, the Japanese, the French again, and the Americans to fulfill Ho Chi Minh’s vision of nationalistic communism.

The “Troubles” in Northern Ireland resulted in neither victory nor defeat, as time proved the ultimate winner. It was the erosion of both sides’ will across the long spectrum of time that brought peace to Northern Ireland. Fierce, indiscriminate tactics eroded the morality of the both of the competing ideologies, and time brought a weariness among the population that would not sustain the efforts of either side.

The Vietnamese fought the first truly modern insurgency when they began leveraging the acceleration potential of modern media. They used the nightly broadcasts of the American MSM as an accelerant in their campaign to erode the will of the American public. Previous to this, news accounts of wars and battles involved months, later weeks, then days, but in Vietnam it shrunk to inside of twenty-four hours. This meant that the American public, could be bombarded daily with news headlines, and that these “headlines” could be leveraged to the insurgents’ advantage. And leverage it they did.

With the help of our MSM, the Vietnamese were able to turn military defeats such as Ap Bac, I Drang, and Hue into tactical victories. Not by their success, or lack thereof on the battlefield, but by the visible and measurable erosion of support back in America. They viewed, correctly, that the will of the American people was their target, and attacks on our forces, and the leveraging of our MSM biases were simply the conduits to accelerate the erosion of that will.

The Vietnamese correctly viewed information operations (IO) as a critical part in winning their nationalist insurgency. They understood early on that the major factors in winning would be their nationalistic ideology implanted through both national pride and brutality, and the erosion of US will. They correctly played for time by balancing their use of conventional and unconventional tactics. And they eroded our will by generating enough casualties to have the body bags played night in and night out on our television sets. They achieved their goal, ironically…first in Congress, then with the public. In 1975 they claimed victory vis-à-vis a conventional fight against the South Vietnamese.

They recognized and mastered modern media warfare in less time than it takes most armies to field a new combat rifle.

And thirty-two years later our Army shows it has no better understanding of how to fight in an IO centric world. In fact, by cutting off milblogging yesterday, they have regressed into an era that no longer exists, AND ceded and enormous IO advantage to a brutal and net savvy adversary.

Ostensively the Army’s motives are to increase force security through improved operational security, but this doesn’t wash in the real world. In order for there to be a “harm,” there must be a significance to that harm…Debate 101. And certainly then, the comparative harm of OpSec breaches must exceed the overwhelming good that credible milboggers have done in painting the real picture on the ground in Iraq, vice the MSM negativity that most of the Green Zone lounge lizards masquerading as MSM reporters have been able to manage. Not likely.

Don’t get me wrong, OpSec is important…sometimes.

In Desert Storm I was asked to pull out my daily authenticator after instructing a flight of Air Force F-16s to go to a holding fix while I was controlling other aircraft and actively engaging targets on the ground. They were within their rights to ask for authentication, and OpSec purists can pound their chests with righteousness, but I was a little busy exchanging fire with a couple of ZSU-23/4s, so I told the F-16s they could either go where I told them to go, and hold for further instructions, or they could go back to base. At that point, and likely with the information that the Army is trying to protect today, the OpSec “breach” could not be exploited and likely held little or no tactical value to the enemy.

So, their justification doesn’t’ wash with me. While OpSec is important…it is unlikely that the breaches that the Army is concerned about resulted in any actual harm to our troops in the field.

This is most likely a knee-jerk response to the sharp criticisms Army brass has received in the past few weeks over their extending of the tours of those serving in Iraq and Afghanistan. The supporting commands within the Army have failed to provide a sustainable manning plan for their deployed forces, and they were rightly held to account for that …from those of us on the outside and by some milbloggers on the inside. And generals do not like to be criticized. Justified or not.

What is so striking about this decision is it compromises these same generals on a number of other levels. It shows they are willing to take one of their most effective tools in fighting this war off the table, simply to reduce the internal criticisms of their questionable policies.

It shows they do not understand that mastering IO is a critical element in winning an insurgent conflict, and the initiative in this arena cannot be surrendered under any circumstances. It shows a stagnation of strategic thought in an arena where IO dominates. It shows the generalship in the US, in spite of myriad of War Colleges and advance degree programs, has not evolved with the modern nature of war outside of conventional strategies and tactics. It signals that the Army brass is now in the damage and reputation control mode, vice a full press victory mode. This defensive posture of the general officer ranks is the harbinger of defeat, and signals its onset.

And worse, in ending internal milblogging, the Army is now relying on the biased MSM to provide the public a “balanced” picture of the situation in Iraq. Not happening. Hasn’t happened. Won’t happen.

The Army, rather than getting a handle on how to effectively use, milbloggers, bloggers, and the blogoshpere, is opting to return to dance with the devil they know. They are choosing to partner with a known adversary, one who has contributed to a past defeat, rather than to gain an understanding of how to better use the myriad talents possessed by the same soldiers who are performing gloriously in the field.

They fear what they have not yet mastered, so they choose instead to return to their complex, yet completely ineffective choreography with the MSM. They default to this strategy simply because it is a game plan they know, even if they know it is not a winning dance, they find comfort in knowing the steps. It signals a surrender of the initiative and repose towards accepting defeat.

The silencing of the milblogs uncovers the breadth of the ineptitude that permeates the top levels of the military command elements. They are discarding one of their most valuable tools in order to protect their reputations. They show they have little understanding of, or aptitude for, modern IO centric, counter-insurgent operations. And their reliance on partnering with their old nemesis, the MSM, for message dissemination, reveals the depth of their deficiencies.

And sadly by silencing the milbloggers, the Army relegates our soldiers to simply being trigger pullers for the generals, not voices in the effort that they sacrifice so much else for.

A Gaza Building Housing Media Outlets Was Destroyed by IDF. This is Why.
Townhall
AP's CEO 'shocked and horrified,' says they had no indication their building contained Hamas military intelligence assets
Twitchy
Not Looking Good for Dems: Americans Deliver Brutally Honest Rejection of Kamala Harris
Redstate
The Hamas Rocket Attacks Are Based on a Lie
PJ Media