I love paying taxes too 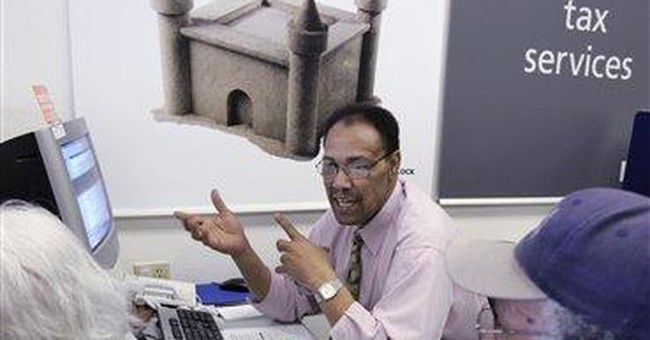 Patrick Ruffini uncovered a gem a couple of days ago when he linked to Matt Sotller's Pollyanna romance novella where Matt announces to the world how much he loves to pay his taxes. And in true lib fashion, instead of espousing his love for taxes in isolation, he chooses to include a thrashing of "right-wingers" and presumably regular conservatives in the process, because they don't love paying their taxes quite so much.

Sorry, but Stoller's angular attacks on the right, while smooching his 1040 are disingenuous at best and a false entree (read as BS) to topic at is journalistic worst. Stoller fails to back up his love for paying his taxes by disclosing how much tax he paid, or by announcing that he is offering to pay more taxes…which might be a true measure of "love." It is hard to put into context Stoller's passion until we understand the depth of his love. And since I have been paying taxes longer than Stoller has inhabited this Earth, I am wondering whether Matt really has sufficient perspective to comment from.

It is easy to believe that one who has a three digit tax bill might truly love paying taxes, where one like me, who is solidly into five figures in tax burden, might not like paying taxes as much. So until we know what Matt's tax burden is...it is hard to characterize his love for paying taxes. Is it passion, lust, admiration, infatuation, friendship, or a false fawning for a semi-clever introduction?

So what we really have is a pseudo-clever, but likely false, entry into his real premise which is that those who resist paying taxes are "unAmerican(sic)", "childish" and "immoral." From Stoller..."Patriotism is about recognizing that we are all connected in a fundamental moral and physical sense, that the war in Iraq is our war, that poverty in New Orleans is our poverty, that public funding to cure cancer comes from each of us and not just the scientists who have made it theirs. The tax burden we face is a very small price to pay for the privilege of taking responsibility for our own freedom and our own society. And the hatred of taxes on the right comes from a hatred for this responsibility. It's childish and immoral and unAmerican."

It is a bit shocking that this weak, and slanted, "analysis" comes from a Harvard graduate, who is coincidentally a History major. Perhaps Stoller has forgotten that it was the colonial antipathy towards taxes that begot our very "American" Revolution.

Modern American conservatives resist paying taxes because, since the New Deal, increased taxes have in resulted in socialist-like Dem vote buying schemes such as Social Security, welfare, Johnson's Great Society, public radio and television, limitless subsidies, and of course, pork. Objecting to these types of extra-governmental expenditures is very much "American," and morally grounded in the founding of this country.

The November 2006 elections were a referendum on conservative fiscal restraint, if nothing else. Republicans suffered at the polls, not only at the hands of the Dems, but also at the hands of the conservative base. Republicans had been drifting towards the Robert Byrd re-election strategy of vote buying via pork, and voters rejected that approach to staying in power out of hand. Members of the conservative base are not anti-tax, they are anti-waste and they want value for their tax dollar. They object to the funding of invented mandates and "rights" that fall outside the defined constitutional limits of congressional authority...Federal support of the "arts" comes to mind. And Stoller gets it completely wrong with...

"People like Norquist, who are charlatans at heart and deeply unpatriotic and immoral, use the complexity in the tax code that they help to create to persuade Americans that taxes are bad."

Norquist and his ilk are not charlatans, nor un-patriotic, they are simply Americans who want, no demand, value for their dollar. He, as many conservatives, is tired of the ever expanding fiscal burden placed upon them via an ever expanding congressional agenda. It becomes onerous to pay twenty-five percent of one's income while watching the money being frittered away on a federally sponsored endowment supporting an under-water ballet adaptation of Shakespeare's Romeo and Juliet. What's not to love?

And contrary to Stoller's conclusion that conservatives are reluctant, even "embittered" when it comes to paying for the needs of this country, even though he offers no proof, conservatives only become embittered when there appears to be no end to the waste and wonton expansion of state, local and federal spending. No restraint. No quest for value.

We resent wasting our money. Liberal governments expand into revenue surpluses, rarely to be constricted when revenues recede. California...Arnold? Liberals view all monies as monies to be spent...monies spent, and in many cases wasted. Look at Oregon's grab for the corporate kicker, or the City of Portland's recent rush to spend their new-found surplus.

We don't loathe paying taxes, we loathe the thoughtless imposition of taxes that serve unproductive ends...as Americans have since before the Boston Tea Party. UnAmerican, or...American?

Matt…a little help here, one History major to another.