The legacy of Walter Reed's failings 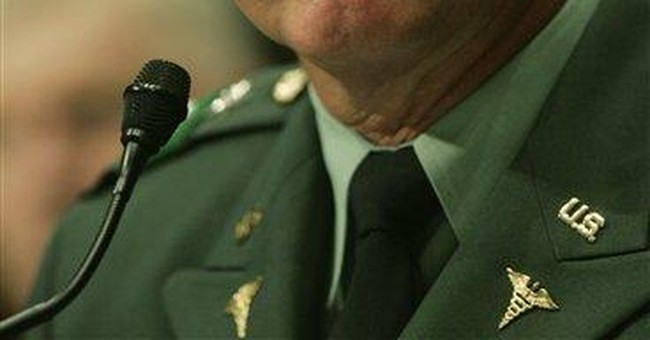 While the over-staged drama of Congressional hearings will continue to dominate the Walter Reed story for weeks to come, there are some real cautions for our Congress and media before they jump in and help the military “solve” the problems at Walter Reed.

The problem is fairly simple. The staff at Walter Reed was caught derelict in their duties.

I am sure that while Democrat led Congressional hearings, and the bent media coverage find some way to prove that the President planted the black mold in the hospital, they will be missing a couple of points.

Military medicine is BIG medicine. It, combined with VA operations, are enormous “businesses” that are currently not efficiently managed or effectively led. Managing a tentacled behemoth is no small task, and it must be left to professionals…managers, not doctors. These entities should not be “led” by tenured physicians with some weekend MBA. They need to be led by professional and experienced leader/managers. Not efficiency experts, and accounting fanatics, but thoughtful managerial professionals used to leading large, diverse organizations or corporations.

In the case of the military hospitals, they need to be led by experienced line officers that have earned management degrees outside of military channels. This is the same approach that is taken with the variety of military post-graduate schools, including its War Colleges and its variety of specialized degree programs. But these should be line officers, not doctors trying to extend their careers outside of their operating room duties. It would be even better that any facility that handles the combat wounded, be managed by line officers that were themselves, previously wounded.

This new style of hospital leader would be tied to their patients in a way that would ensure, that in the execution of the primary purpose of their existence, these facilities would be hallmarks of excellence, not paragons of medical mediocrity. Be still moaning doctors…you, as with your educational brethren, have had your chance as manager/leaders, and have failed miserably. Now you get to do business the military way; the way in which “leaders” accomplish their missions, or are rightfully relieved of duty.

The military’s medical services and the VA need to get themselves in shape immediately. They need to meet recognized standards, and sustain them. This is accomplished by getting the cronyism out of the VA, and putting line officers in charge of our military facilities…with no apologies. Changing the leadership strategy for hospital management will be unwelcome by medical professionals, but this change is absolutely critical, if we are to ensure that our wounded are dealt with in the interested and respectful manner that they deserve.

Doctors and dentists in the services and the VA are there for one simple reason, to provide care to our wounded servicemen/women…ALL else is secondary. Failing to accomplish this in the middle of a protracted war is a grievous failing that the Army must atone for, and that all other facilities must guard against…assuming they would pass muster today. For those that wish to keep your jobs, refocus on what is important, and put our wounded as your number one priority…all else pales.

You lost focus at the worst possible time. There is no excuse. It is time for a drastic change.

We are missing an opportunity to support “our own” by shipping millions of charitable dollars off our bases each year…it is time to cut off the flow, and call in our marker from those charities that have thrived over dozens of years from the donations of our servicemen and women.

Let’s take care of our own, and lay claim to what we need, and let’s get some of it from those we have supported for so long.

Now we will see if all of the Congressional posturing over the past couple of weeks about supporting our troops will be supported with long term action. Support DOD and VA hospital budgets through adequate funding, including enough monies to attract top level doctors and managers to the DOD and VA hospitals. Provide minimum level of care guidelines that stretch our capabilities, but are measurable, so that “adequate care” is not a moving target impossible to hit by ever-wandering congressional standards. Congressional visits to our hospitals should be a routine occurrence, not an infrequent grip-and-grin for PR reasons.

Sincere Congressional involvement, combined with firm standards of care, and adequate budgets would go a long way in stabilizing the slipping state of DOD and VA health care.

For the social program pushing Dems and MSM, this is what non-competition, governmental, BIG medicine can become…even in the best intentioned facilities. This is the harbinger of a national health care system, and the by-product of a non-competitive industry. Without competition or incentives to improve, public medicine will spiral into complacency, just as the staff at Walter Reed did.

Of course the Dems and the MSM will be pleased with themselves, as all citizens will now be covered by health insurance, regardless of how mediocre it becomes. New, BIG medicine will easily evolve into an endless source of “investigative reports” and Congressional hearings. They will forever be able to uncover zillions of shortcomings effortlessly found in under funded systems, and unwieldy organizations; leaving only a trail of exasperated, yet well-intentioned public servants in the wake of their near-continuous stream of “fact-finding” activity.

If you want to see what universal, government backed health care will look like, or worse…look at Walter Reed. The administrative latitude that the services have in accomplishing their mission is unparalleled in the civilian world…if they struggle, you can bet that big, government managed systems will struggle far worse, with many more grievous examples of sub-standard care than will be found at Walter Reed. Congressional dictum cannot “will” mammoth systems to function effectively or efficiently, and such systems will only become self-licking ice cream cones for the left and the MSM…an endless source for malpractice investigations and Congressional windbagging.

The legacy of Walter Reed’s failings will be the imprint that their malfeasance has left on our injured troops; our diminished confidence in our services’ ability to set and sort priorities; and the congressionally mandated overhaul which the VA and military medical systems will certainly undergo in short order.

But the true lesson of Walter Reed, is that monstrously large medical systems are not easily managed, and a lack of competition breeds complacency…this is a preview of a national health care system, and it will not be an Oscar winner.