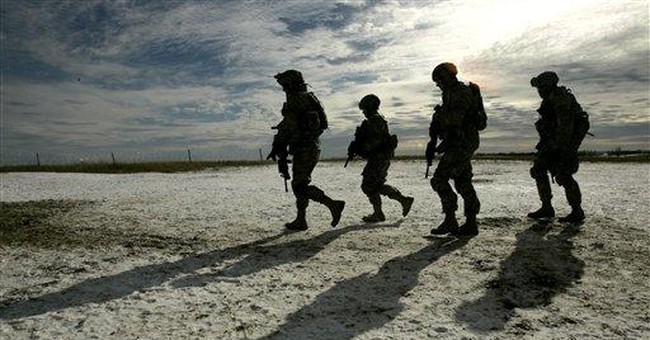 When I cracked 1776 on Wednesday to give it its long overdue read, there were two pleasant surprises. I found that it was autographed by the author…something I am appalled at myself for not remembering. And secondly, alone on the inner leaf just prior to Part One, I was greeted by a simple and profound quote from General George Washington…

“Perseverance and spirit have done wonders in all ages.”

I should grace the elegance of his words by stopping now, but I fear that my editor is expecting more, and that my semi-conceited verbosity cannot be held in check.

Developing synergy, while not one of the nine generally accepted “Principles of War,” is an essential element in warfighting. Synergy is developed by having sufficient resources available to conduct all aspects of warfighting required to complete the specific mission to an overwhelming effect.

Too few troops… and units will not be able to conduct all the necessary ops required to fight and win a counterinsurgency struggle. They will not be able to simultaneously hunt down armed and indiscriminant murderers, protect logistical lines of support, conduct aggressive patrolling operations, conduct community confidence building and infra-structure re-building efforts, and deliver the expected results to an impatient Congress in a timely manner.

Too many troops… and a discontinuity of effort between units can develop, the logistical tail can outgrow the size of the dog, and the cost to deliver the expected results to an impatient Congress can exceed their expectations and diminish their support.

Getting the proper sized force in place is critical to ensuring that a lean, aggressive force can break the enemies force and their will, ensure its own security, build confidence amongst the local populace, and do so in a timely and efficient manner.

Three years of combat operations in Iraq has greatly diminished the capabilities of the insurgents in Iraq. Yes, they have become more lethal with their explosives…this is simply an outgrowth of the ability to get their hands on better technology, but they are not becoming a better organized, or more effective combat force. Indeed, I think it is very safe to say that if we pulled out today, the insurgents would not be the winner, as they are nearly spent and exhausted, but some third party would likely step into the vacuum that their diminished ranks could not fill.

The goal of the Surge is to complete the task of breaking the will of the insurgents, at the same time, having enough forces available to discourage the rise of a non-governmental third party from interrupting the growth of this fledgling democracy. A simple principle, and well within the norms of our current warfighting capabilities. Situations in combat change and often commanders must be prepared to adapt their strategies and underlying tactics mid-course…this, however is no cause for alarmist, defeatist behavior.

The Surge should be aggressive in its combat action. It needs to be forceful, lethal, and determined. It needs to re-establish our military supremacy over the situation in Iraq, and in doing so it will re-establish a determined Iraqi populous support for our efforts and their democracy.

Forget hearts and minds, winning insurgencies is about winning the confidence of the general population. If you fail to build a confidence in your inevitable victory and the chances for a long lasting piece, they will waffle in support, biding their time until a clear winner emerges.

Insurgent forces are usually unimaginably brutal in their tactics, not so much to garner support, but more in their efforts to establish security around their ruthless operations. Populations paralyzed in fear, typically do not act against insurgent forces that have a hope in prevailing. Our Surge must extinguish any ray of hope that a post-US Iraq will degenerate into a vengeful free-for-all amongst all the competing political and military entities. To do so, we must crush the ability of our enemies to threaten the general population.

Secondly, we must completely isolate Iraq from any outside political, military, or any other de-stabilizing influences. This includes the harsh interdiction of Iranian, Syrian, Al Qaeda-ian, or any other foreign entity that desires to affect the outcome in Iraq.

This means securing cross-border routes from Iran and Syria, with extreme military measures if required. Lethal combined air-ground operations are likely required to eliminate these as routes of re-supply and re-enforcement. Constant patrolling and interdiction is the order of the day, and this requires a significant number of resources to execute across long international boundaries. This will greatly reduce the combat power of the insurgents and force them to rely solely on “popular” support, which is likely minimal.

This action will additionally have a negative impact on the morale of the insurgents. In order to defeat them, they need to be, and feel, isolated. Isolating the battlefield, aside from providing additional security for our forces, will have an immeasurable effect on the ability of the insurgents to effectively recruit for, and conduct operations within Iraq. The more isolated they are, and they feel, the less effective their operations will be. They need to be impressed with an overwhelming sense of isolation and hopelessness. For, as anyone who has gone through SERE (Survival Escape Resistance and Evasion) training knows, the sense of isolation is a powerful corrosive on the human will. We need to firmly impress the sense of isolation on the insurgents.

We need to win the information war. We need to quit dancing around this one.

The military and the Administration need to redefine this part of the war, and they need to do everything in their power to communicate to the Iraqi people and to all Americans, that we are, even to this point, winning this war. We need to redefine the measureables, swarm the conservative talk shows, and embed as many conservative bloggers over the next few months as possible. Instead of dead US servicemen dominating the MSM, the American public needs to hear about kilowatt hours distributed across the Iraqi power grid. They need to hear how many small businesses opened up last month. They need to hear of dead insurgents, traffic volume, GDP, oil sales, school openings, local elections and everything else that peaceful societies take for granted and fail to appreciate. The public needs to be inundated with every bit of positive news that can make its way out of Iraq. To fail to do so, simply isolates our troops in their efforts and forces them to carry the enormity of their task solo, while the pack wolves known as the MSM circle like vultures waiting for failure. We have to gain traction on this aspect of the war, it is critical to keep the definition of the fight out of the hands of the defeatists….both MSM and Congressional.

How long will the surge last?

Until victory or until the perseverance and spirit of the American will erodes. Victory in Iraq is achievable by our amazingly capable and determined Armed Forces. Their effort will only be undercut by self-serving politicking and pointless impatience.

How did Indianapolis get into the Super Bowl?