The Kinematics of the Spear 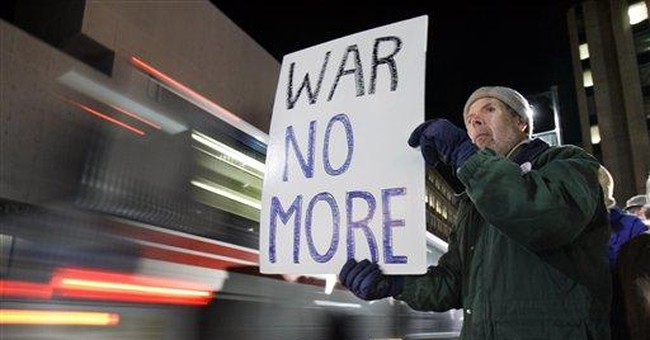 We understood that there were many things about our institution(s) that were wholly imperfect, and many things about our training that were hollow or ineffective. We understood that the steel point was somewhat corroded and fragile. We were not making our readiness rates, and not meeting our basic individual training requirements. Marines were not going to the rifle range in any regularity, and subsequently, we were unprepared for the rigors or demands of war. We were the point…we were determined and hardened, but we were not ready for war.

Our training requirements were not aligned with the Training and Readiness Manual requirements for our combat readiness measurements. In the base requirements…we did not have enough flight hours to do the training that was required for us to be successful when we went to war. We might as well have been tin foil strapped to a bent willow branch…we simply would not have been in effective in the big fight.

This did not keep us from being successful in Grenada and Panama or Desert Storm, or somewhat successful in the USS Mayaguez rescue, but it reared its head in the Iranian Embassy takeover, Desert One, Lebanon, and the streets of Mogadishu. We were simply not aligned enough with our missions, capabilities, and tactics to execute to the level required being successful in those missions. But we were very close in each case to achieving our objectives.

What was missing? Where was the rest of the spear?

A javelin thrower is a spear throwing machine. Success does not entirely depend on the aerodynamic design of the javelin itself. A well designed javelin will pierce the air effortlessly and pierce neatly and deeply into the point of impact. The pointy end will do its part, set on the right course. But success is dependent on the application of power, through a complex interaction of human systems, and it can be heavily influenced by other fleeting factors such as rain, wind, and will. Such it is with today’s military.

From everything that I have witnessed…from the tenacity and battlefield preparation of our air forces in Desert Storm, to the integrated blitzkrieg of the ground forces in Desert Storm, to the unparalleled successes of our troops in executing Operation Iraqi Freedom I, I have seen nothing that indicates that the tip of the spear is anything but carbon steel…penetrating and deadly. The point is capable of lethal penetration.

The human interface…the National Command Authority, is also on track. Faint of heart, and weak of thought…go back… if we don’t deny the integrated Islamacist threat training opportunities and real estate, they will train to inflict more damage upon us than they did on 9/11. Fact. No discussion. Warriors, as the Islamofascists are, seek to train, and then they seek to impose their physical will and damage on others…such it is with unrestrained warriors. Kid yourselves if you will, but with Afghanistan denied, the Islamofacsists would have turned to Iraq for a safe haven for training and re-tooling…which they did…in fact.

The spear is sharp. The brain is taking aim. The body must heave.

Such it was with the American public, which clearly understands the necessity of attacking instead of defending. The American public prefers to fight abroad, and has supported that concept for over one hundred and forty years. Americans understand that fighting on our turf is logarithmically more expensive than fighting abroad. Americans know that reacting to an aggressor is logarithmically more uncertain than engaging him on the battlefield of our choice. Americans know that when we unsheathe our weapons abroad, we do so, so that our country does not again experience the anguish of Manassas, Antietam, Gettysburg, Pearl Harbor, and New York City.

The spear is sharp. The aim is true. The body throws.

Then the wind and the rain influence the flight of the spear.

Since Walter Cronkite influenced the outcome of the Vietnam War, the press has been influencing the flight of the spear. They have been trying to influence its trajectory and shallow its impact…neither of which enhances the chances of our national strategic objectives succeeding. In fact, the case can be made…over and over…that their main objective is to sell more papers and air time, rather than to see the eventual success of our national, and Congressionally supported, policies. They are the wind, influencing the trajectory of our national policies.

They are diminishing the flight and impact of the spear. They are wasting its energy.

That brings us to Congress. The same feckless, poll-floating heathens that engage our military by nearly unanimous margins, then begin to immediately back-pedal, poll watch, and wind vane respond, as they release the spear…they are the rain.

They are the shameless politicizers of highly trained steel. They will limply commit to a trajectory, and then seek to correct course back to the safety of the gym bag once the spear is loosed. They will sacrifice all of their tosses, so that they can say they “competed” well, while our youthful athletes are left dead on the battlefields of Vietnam and Iraq. If this feels “right” to anybody…speak up.

“What I think I missed was the crucial role of Congress in civilian/military relations. Everybody tries to focus on the White House relationship with the generals. But where Congress can really help is in formulating and examining strategy, and that the one place where we really have tied our shoelaces together on the ground in Iraq is strategy. It’s done very well tactically, but often without meaning, because good tactics without strategy are like a Ferrari without a steering wheel. It’s powerful, but it doesn’t get you where you want to go. And so Congress, because it’s been asleep at the wheel, really, since 9/11, abdicated that crucial role of saying okay now, what’s your strategy, what means are you going to use to achieve what goals?” (my emphasis)

Iraq is not lost…it simply takes the will of the country to loose the pointy end of the spear, and to support the throw…not to try to reel it back in once tossed. Winning is the objective…not competing or simply showing up. Congress committed…it is time to back that up…rather than politicking…for the politicking is being done in Congress, not by a determined President or military. And the trajectory of the spear and the effort behind it is additionally being subverted by the press.

The pointy end of the spear…the best we have…is being wasted by people who simply can’t vote the same way twice, and by an elitist press who cannot connect in the least with where it is that their right to publish is actually earned.

If this is OK with anyone…raise your hand…if you can’t, hunker down and get ready for a fight, if you have the stomach for it.