I Just Want To Negotiate… 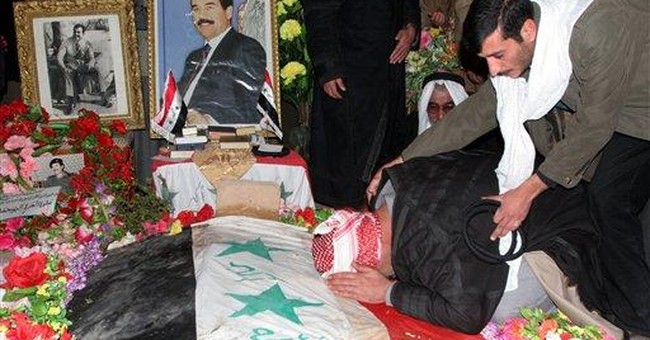 The best part of living in the People’s Republic of Oregon, Portland District is that I don’t have to go far to get my finger on the pulse of liberal thought. If I can make it to the end of my driveway every morning, I can get my daily dose of the liberal agenda, fed to me directly by my paper source, The Oregonian.

I can usually get the recommended daily allowance from the front page, and by page A-4 my morning breakfast has slid off the slope of the kitchen counter, predictably to the left, and neatly into the garbage can. I get my fill from the likes of …

“Unraveling in Iraq doomed U.S. plan” “A mighty big hug for a might big tree”

I am not making this up!!

But some days, you have to venture into the depths of lefty MSM drivel to get to the real nuggets. Some days you have to mine the pages to find those pearls of wisdom that get you into the depth of the liberal mind. Often, with the Oregonian, that brings you to the editorial page. Don’t be afraid…you can actually read it without getting any on you!

Predictably the Editorial Board never disappoints as a liberal agenda monger…global warming and polar bears, suggesting strategies to overturn voter approved conservative initiatives on spending limits and property rights, advocating liberalizing immigrations laws while using Europe as the model, a continuous stream of anti-war/anti-Bush commentary…we got it all.

Occasionally, however you still have to “mine” a nugget. You have to link a couple of editorials together in order to fully comprehend the full deflection of the galactically liberal.

In November I posted on the failed “negotiations” between the City of Portland, Schumacher Furs, and some fringe animal rights group. My observations at the time…

“It is representative of liberal City leadership blindly supporting an uber-left liberal cause, and leaving an innocent business owner as the victim. It is not representative of a City "working hard" as a force for moderation.

And we get to the crux…what of those “negotiations?” Painting the windows with an opaque paint…requiring Schumacher to display a large tag inside of the garment proselytizing the bible of some fringe animal rights group whose entire membership may constitute a number somewhat less than that of a men’s synchronized swimming team…and generally allowing a business to be bullied by protestors can hardly be considered fair “negotiations.”

But that IS what the left considers “negotiation,” and they are smug about it. The Oregonian editorial board chides Schumacher …

Maybe the Oregonian editorial board should read their own mailbag, where support for the Schumacher’s was published at four-to-one for Schumacher and against the naked, paint throwing, death threatening, sidewalk obstructing, peaceful furry animal defenders.”

I continued on, relating this example to John Kerry’s enthusiasm for negotiating with Iran and Syria as the ISG recommends…

“Beware America…Kerry, the Dems, and their liberal membership don’t want solutions, they want “negotiations,” and the results, as Schumacher proves, don’t really matter…it is all about feigning an effort, and moving the ball forward on minority driven, liberal causes…the good of the country and the rights of others be damned. This is a harbinger on how liberal officials implement their minority driven, liberal agendas, and how they approach problem solving. They don't actually solve problems they negotiate, defer, delay, deny, and then the innocent party becomes a victim of their malfeasance.”

So, I was not surprised to see this recommendation by the Editorial Board last Saturday regarding the Ethiopian invasion of Somalia to rid the country of its Islamic Fundamentalist parasitic occupiers…

“On Wednesday, Somali Islamic leader Sheik Hassan Dahir Aweys told a European Union envoy that he was willing to return to peace talks with a willing Somali transitional government.

Excellent. Military action has been helpful, but it's really no long-term solution to this situation. On the contrary, the last thing the world needs is more violence and instability in the Horn of Africa, so near the sea lanes critical to the export of Middle East oil.

The Ethiopian incursion serves as a reminder of how quickly violence can erupt in a geo-strategically vital part of the world we too easily choose to forget. This week's flare-up will be useful only if it gets Somalia's Islamic extremists back to the negotiating table and prompts both Europe and the United States to address this tinderbox and potential safe haven for terrorists.”

Oh, I get it…the one thing that actually corrected the problem; direct military action is only “helpful.” The real solution lies with negotiation?!?

What the negotiating addicted left continually fails to grasp is that you legitimize the existence of those at the table when you negotiate with them. When consent is given to negotiate, all parties at the table can be treated as equals…even the deadly, oppressive, intolerant, cockroach-like invading, uninvited Islamic extremists in Somalia. Negotiate?

Soon I am going to need a W-L record of how well negotiations actually have worked on the international scene…I guess the border between North and South Korea remains intact. I guess that Khadaffi is still in favor after he negotiated away his nuclear development program. Any others? Bueller? Bueller?

Why is the left addicted to a methodology that produces only spotty and unreliable results? Because the leftie agenda proselytizes for “inclusion” in all matters, and since a large portion of their constituency is extreme on the issues, negotiation is a methodology, by its very nature, that legitimizes the extreme left edges of their agenda. They “legitimize” their issues everyday, simply by insisting that fringe players are allowed at negotiating tables across the globe.

When will we learn that only when all parties come to the table with sincere, selfless interests that long term solutions can be garnered from negotiating tables worldwide? When will we quit legitimizing violent and deadly fringe groups by offering them a place at the table? When will we learn that there is “right” and “wrong” in this world, and that sometimes negotiations can only come after the wrong or evil are vanquished, not while the “wrong” still wields illegitimate power?

Negotiations under conditions that are not shaped for success from the outset, only delays the inevitable future conflict that will arise from the friction derived by half-hearted agreements, “negotiated” between modestly willing participants. Negotiations are not to be viewed, as the left does, as “successes” in and of themselves, but as potential pathways to success, and under the right conditions.

As soon as the left learns this, they may be ready to govern again.