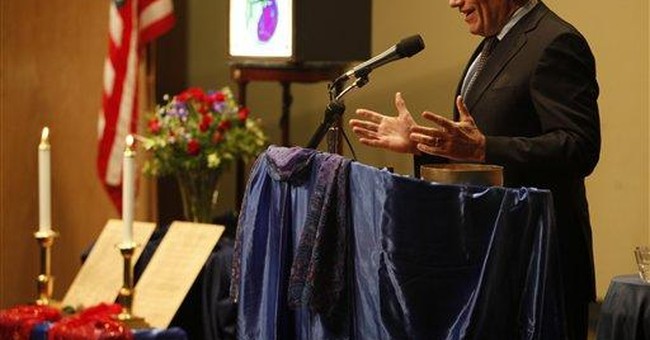 WASHINGTON -- What is most disturbing about the coverage of Bob Woodward's "Obama's Wars" is not the juicy bits of conflict and infighting; it is the fact that the White House seems pleased with the image of President Obama that emerges. "I think the president comes across pretty well in the book," says one official, "even if it looks crazy around him."

What comes across is a president deeply skeptical about the Afghan War, suspicious of the advice of military leaders and obsessed with finding exits and setting withdrawal deadlines. To a press or political aide in the administration, this must seem like the public relations sweet spot: Since Americans are conflicted about the Afghan War, won't they be reassured to know that the commander in chief is conflicted as well?

But a president has a number of audiences, including American troops, the allies who fight at our side, and enemies who constantly take the measure of our resolve. None are likely to be impressed by America's reluctant warrior.

The craziness of the process is not irrelevant. Future historians will study the Afghan policy review as a warning, not as a model. Obama's ambivalence has created a national security team in which arguments fester instead of ripen. The process revealed and widened divisions between civilian and military leaders, within the Joint Chiefs of Staff, between the National Security Council and the Department of Defense, and between American and Afghan officials. How can America's ambassador to Afghanistan, Karl Eikenberry, possibly continue in his job, having accused President Hamid Karzai of being on and off his depression meds?

Obama eventually imposed the broad outlines of an outcome. But the assent he demanded did not create agreement or consensus. There is no evidence that past arguments -- particularly concerning the hardness of the July 2011 withdrawal deadline -- have ended.

The process was not only chaotic but highly politicized, with national security adviser James Jones criticizing the role of the "campaign set," which he also dubbed the "Politburo" and the "mafia." Obama himself tied the outcome of the policy review to political considerations. "I can't lose the whole Democratic Party," he reportedly told Sen. Lindsey Graham.

Cynics may regard this as typical. Actually, it is remarkable. It is the most basic duty of a commander in chief to pursue the national interest above any other interest. The introduction of partisan considerations into strategic decisions merits a special contempt.

The largest problem is the president's own ambivalence. "This needs to be a plan about how we're going to hand it off and get out of Afghanistan," Obama is quoted as saying. During his campaign for president, Afghanistan was the good war, the war of necessity, the war that had been ignored but must be won. As president, Obama's overriding goal is retreat. "Everything we're doing has to be focused on how we're going to get to the point where we can reduce our footprint," Woodward quotes Obama. There can be no "wiggle room."

This attitude led to the president's decisive intervention -- a six-page memo designed to impose time and resource limitations on a reluctant military. Generals, of course, are not always right, as President George W. Bush discovered in the early years of the Iraq War. But are we supposed to be reassured that a president, of no proven military judgment, driven at least partially by political calculations, imposed a split-the-difference approach, only loosely related to actual need or analysis? A temporary increase of 30,000 troops coupled with a withdrawal deadline, it now seems, was an arbitrary compromise, not a fully developed military strategy. The armed forces were told to salute and make do. No wonder an Obama adviser complained to Woodward that the strategic review did not "add up" to the president's eventual policy.

Woodward's book is genuinely reassuring about Obama in some areas -- his general commitment to fighting terrorism, his focus on the possibility of nuclear terrorism, his understanding of the threat originating in Pakistan. But the more we know about Obama's views of the Afghan War, the less confidence he inspires. Is there a historical precedent for an American president, in time of war, hoping to convey an impression of studied, professorial ambivalence about the war itself? Is it possible to imagine Franklin Roosevelt or Harry Truman purposely cultivating such ambiguity?

Yes, President Obama has sent more skilled, well-led troops to Afghanistan. But he has also created a strategic challenge for America. Our enemy is patient and determined. Our president, by his own account, is neither.