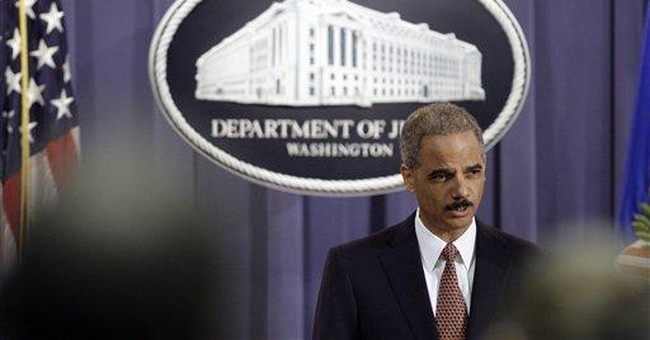 So how did Holder become the most destructive member of Barack Obama's Cabinet?

Holder launched his tenure by showing disdain for the work of career federal prosecutors when it fit his ideological predispositions. In 2004, a task force from the Eastern District of Virginia investigated allegations of misconduct against the CIA and found insufficient evidence of criminal conduct or intent. Holder ignored the views of these respected prosecutors and appointed his own special prosecutor, appeasing a political constituency that wanted the CIA to be hounded and punished. As a result, morale at a front-line agency in the war on terror has plunged. What possible reason could a bright, ambitious intelligence professional have to pursue a career in counterterrorism when the attorney general of the United States is stubbornly intent on exposing and undermining his colleagues?

Now Holder is displaying an exaggerated respect for the work of career federal prosecutors in New York, also when it fits his ideological predispositions. He is asking them to make the case against five 9/11 conspirators, in a circus atmosphere, with an uncertain chain of evidence (gathered on a battlefield), under a cloud of torture allegations that Holder himself has encouraged.

There is one serious argument for this course: that a civilian court will provide greater legitimacy for the imposition of the death penalty than a military tribunal. But the guilt of these terrorists is not in question. And it is difficult to imagine that those repulsed or impressed by Khalid Sheik Mohammed's confessed crimes will care much about the procedures surrounding his sentencing.

In exchange for a marginal public relations advantage, America will be subjected to the airing of intelligence sources and methods, to the posturing of mass murderers fully aware of their terrorist star power, to the possibility of mistrial and procedural acquittal, and to an increased threat of revenge attacks against New York City. Holder seemed to concede this last complication by asserting that New York is "hardened" against possible terrorism. If I were a New Yorker, that would fall into the category of chilly comfort.

In the end, Holder made a decision memorable for its incoherence. He declared American military tribunals constitutional and appropriate for some terrorists -- then awarded 9/11 mastermind Mohammed a presumption of innocence and the full, O.J. Simpson treatment.

In the original plan for the terrorist attacks, according to the report of the 9/11 Commission, Mohammed was supposed to be on the only hijacked plane that landed. He would kill all the males aboard, then make a dramatic speech to the world. At his trial, he will now get his wish.

Holder's choices do not reflect the normal policy shifts between administrations. It is not typical that seven former directors of the CIA have publicly denounced Holder's assault on the institution they served. It is not typical that Holder's immediate predecessor, Michael Mukasey, has called the plan for trials in Manhattan a risky "social experiment" that will raise the risk of attack "very high." Something unique and frightening is taking place: The ACLU is effectively being put in charge of the war on terror.

Holder contends that if people will "in a neutral and detached way, look at the decision ... and try to do something rare in Washington -- leave the politics out of it and focus on what's in the best interest of this country -- I think the criticism will be relatively muted." Holder clearly views himself as Atticus Finch, dispassionately defending the rule of law against the howling mob. In fact, Holder is taking the legal path blazed by former Attorney General Ramsey Clark, who defined legal objectivity as indifference to the soiled interests of his country. Holder's liberal principles have become "detached" from the real-world struggle against terrorism: Let justice be done, though the heavens, and buildings, fall.

Wartime American presidents such as Abraham Lincoln and Franklin Roosevelt have understood that the Constitution is not a suicide pact. So enemy combatants consistently have been judged by a different and harsher legal standard than American citizens. Whatever his initial assurances, Holder does not believe America is at war with terrorists. Even worse, he seems determined to undermine those who do.