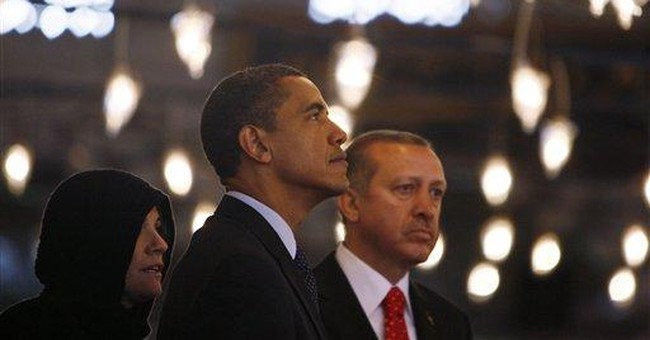 WASHINGTON -- Who has been the most polarizing new president of recent times? Richard Nixon? Ronald Reagan? George W. Bush?

No, that honor belongs to President Barack Obama. According to the Pew Research Center, the gap between Republican and Democratic approval ratings for Bush a few months into his first term was about 51 percentage points. For Obama, this partisan gap stands at 61 points. Obama has been a unifier, of sorts. He has united Democrats and united Republicans -- against each other.

The Pew report notes that this is the extension of a long-term trend. Decades ago, a majority of Democrats approved of Richard Nixon's job performance early in his first term. A majority of Republicans did the same for Jimmy Carter. But that has not been true for any president since.

Ron Brownstein, the author of "The Second Civil War," cites a variety of structural reasons for intensified division. There has been a "sorting-out" of the political parties, making each more ideologically uniform. Long, nasty presidential campaigns stoke our differences. Media outlets have become more partisan. Ideological interest groups have proliferated. Congressional leaders have changed the rules, making it easier to impose party discipline.

But Obama was supposed to be the antidote to the poison of partisanship. During the presidential campaign, chief strategist David Axelrod told Brownstein, "If there's an enhanced Democratic majority, I think that he's going ... to urge a special sense of responsibility to try and forge coalitions around these answers, not because we won't be able to force our will in many cases, but because, ultimately, effective governance requires it in the long term."

That makes last week's votes on the budget resolutions a landmark of ineffective governance. Not a single Republican in the House or Senate supported the bill, largely because the Democratic majority forced its will. Republicans were flattened, not consulted. Democratic leaders talk of enacting controversial elements of the budget through the reconciliation process -- which would require 51 Senate votes, not the normal 60, for passage. Only in Washington would the word "reconciliation" refer to a form of partisan warfare.

Without Republican input or influence, the budget is a tax-and-spend caricature. Obama has complained of inheriting a $1.3 trillion debt. According to economist Michael Boskin, Obama's proposals would add $6.5 trillion in debt over the next decade -- about $163,000 for every American taxpaying family.

I am not generally a deficit hawk. A government can run a responsible deficit in a growing economy -- and may have to run one to counteract an economic downturn. But Obama's proposed level of debt is irresponsible. It makes broad tax increases nearly inevitable. It expands our dependence on China, America's loan officer. And it creates pressure for the government to purchase or monetize debt, leading to inflation. No Republican, even of the moderate variety, could accept a budget that spends America into unsustainable debt by completely avoiding the setting of realistic priorities. And none in Congress did.

There is an argument in favor of political polarization. Franklin Roosevelt and Reagan, in their time, were polarizing presidents precisely because they were ambitious presidents. They believed that some national goals were worth the sacrifice of amity. A decisive leader is sometimes a divisive leader.

But Obama's polarizing approach challenges and changes the core of his political identity. His moderate manner and message appealed to a country weary of division and ambition -- a nation now asked to endure another round of both. But Obama's domestic agenda is also resoundingly typical -- as though he were some conventionally liberal backbench senator suddenly thrust into immense influence. Which, of course, he is.

It would have been relatively easy for President Obama to divide the Republican coalition, peeling off less-partisan Republicans with genuine outreach. Many Republicans were prepared to accept short-term deficits to stimulate the economy in exchange for long-term fiscal responsibility. Obama could have focused more narrowly on resolving the financial crisis -- the key to all economic recovery -- and delayed his ambitions on other issues to a more realistic time. In the process, he might have gotten some Republicans to share his political risks, instead of nursing grievances on the sidelines.

Polarization in American politics has its own disturbing momentum, aided by some strident Republican voices. But that does not require a president to make it worse. And it is a sad, unnecessary shame that Barack Obama, the candidate of unity, has so quickly become another source of division.