Not So New Politics 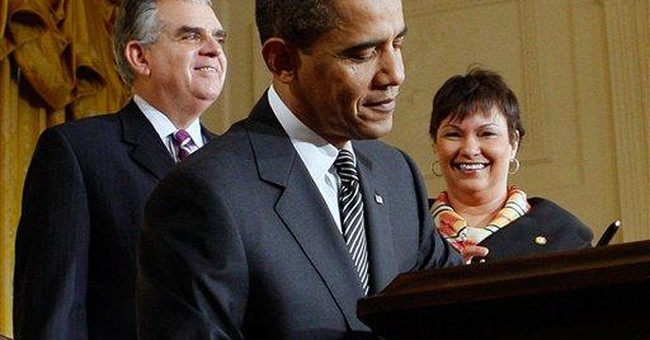 WASHINGTON -- Some of the personnel stumbles of the Obama administration -- including the aborted nomination of Bill Richardson as commerce secretary -- resulted from incompetent vetting. William Lynn's reception as deputy secretary of defense has been complicated by hypocrisy -- the administration's attempt to gain political credit for a restrictive lobbying ban it swiftly violated to get a qualified appointee.

But one major personnel error was made from malice. And it calls into question the depth and duration of President Obama's "new politics."

During Obama's transition, Dr. Mark Dybul was initially asked to stay on as the coordinator of the President's Emergency Plan for AIDS Relief (PEPFAR) for several months until a replacement could be found and confirmed. Because Dybul was the main architect of the program and one of its guiding visionaries, few were surprised by the offer. Along with Ambassador Randall Tobias, Dybul organized the most staggeringly successful foreign assistance effort since the Marshall Plan -- eventually helping support lifesaving AIDS therapy for more than 2 million people.

While I worked at the White House, I saw Dybul combine the ability to build bipartisan consensus for PEPFAR on Capitol Hill with exceptional compassion for the victims of a cruel and wasting sickness. It mattered little to the Bush administration that Dybul was openly gay or had given contributions to Democrats in the past. He was recognized as a great humanitarian physician -- a man of faith and conscience -- almost universally respected among legislators, AIDS activists, foreign leaders and health experts. Almost.

A few radical "reproductive rights" groups -- the fringe of a fringe -- accused Dybul of advocating "abstinence only" programs in AIDS prevention. It was always a lie. Dybul consistently supported comprehensive prevention efforts that include abstinence, faithfulness and condom use -- the approach that African governments themselves developed. In fact, Dybul was sometimes attacked from the right for defending a broad definition of AIDS prevention, including programs to address prostitution and transgenerational sex. Over the years, PEPFAR distributed 2.2 billion condoms -- hardly an "abstinence only" approach.

By encouraging Dybul to stay until his successor was in place, the Obama administration displayed a generous spirit, as well as a practical concern for continuity in a vital program.

Then, the day after the inauguration, Dybul received a call asking him to submit his resignation and to leave by the end of the day. There was no chance to reassure demoralized staffers, or PEPFAR teams abroad, or the confused health ministers of other nations. The only people who seemed pleased were a few blogging extremists, one declaring, "Dybul Out: Thank you, Hillary!!!"

As in most political hit-and-run attacks, the perpetrator was not anxious to take credit. It seems unlikely to be Hillary Clinton herself -- Dybul's ultimate boss at the State Department -- who had not even been confirmed when Dybul received his call. But someone at State or the White House determined that sacrificing Dybul would appease a few vocal liberal interest groups. One high-ranking Obama official admitted that the decision was "political." Yet the AIDS coordinator is not a typical political job, distributed as spoils, like some deputy assistant at the Commerce Department. It involves directing a massive emergency operation to provide lifesaving drugs, through complex logistics, to some of the most distant places on earth. And now that operation may be months without effective leadership -- undermining morale, complicating interagency cooperation, delaying new prevention initiatives and postponing budget decisions.

It is difficult to imagine what vision of public service could cause any Obama official to celebrate their victory by sabotaging a good man and good cause. And it is difficult to conceive what political gain Obama has achieved. This type of captivity to extreme interests is precisely what has discredited Democrats so often in the past. It is a kind of politics with all the "newness" of a purge, all the "freshness" of a mugging.

Governing, admittedly, is not badminton. But it costs little to be graceful. And pettiness, in this case, may impose a cost on the world's most vulnerable people.

"We, who seven years ago," wrote William Butler Yeats, "Talked of honour and of truth, / Shriek with pleasure if we show / The weasel's twist, the weasel's tooth." For some in the Obama administration, the baring of the weasel's tooth took merely a day.

But none of this should bother Mark Dybul, who sleeps well in the knowledge that he helped save millions of lives -- an experience his critics will never share.