Preventing the Triumph of Violence 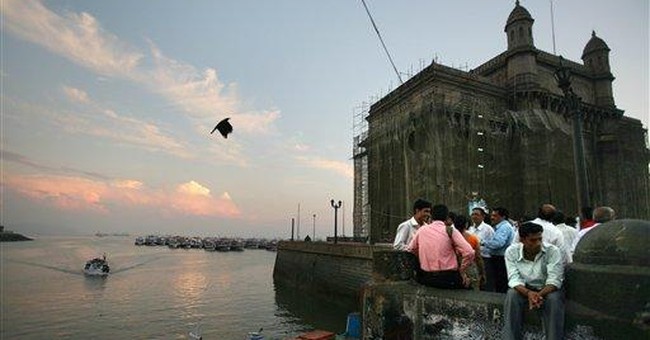 WASHINGTON -- The attacks have come like the steady rhythm of a clock -- 188 dead in Mumbai. Tick. Fifty-two dead in the London bombings. Tock. One-hundred-ninety-one dead in the Madrid train attacks. Tick. Two-hundred-two in Bali, and 2,973 in New York, Virginia and Pennsylvania.

Maybe this is just the risk of living in the modern world. Or maybe it is the tick of a detonator.

Days after the Mumbai attacks, the Commission on the Prevention of WMD Proliferation and Terrorism claimed that a chemical, biological or nuclear terrorist attack is likely before the end of 2013. "Our margin of safety is shrinking, not growing," it concluded.

People naturally tend to mentally bury such risk. Wrote T.S. Eliot: "It is hard for those who live near a Police Station / To believe in the triumph of violence."

Part of the appearance of security is rooted in seven years without additional terrorist attacks in America -- itself a triumph against violence. It is difficult for a leader to take credit for a negative achievement -- for the absence of failure. But here credit is due.

Most of the methods employed in this effort have been effective, congressionally approved and broadly noncontroversial -- fighting money laundering, intercepting terrorist communications, tightening up the border. These measures were muscular but hardly as muscular as other wartime precedents: Abraham Lincoln confiscating newspapers and putting editors in jail, Franklin Roosevelt interning 120,000 people of Japanese descent.

Yet some methods designed for exceptional cases, such as waterboarding, were ethically disturbing and eventually counterproductive -- causing self-inflicted ideological wounds in a largely ideological struggle. And there is little doubt that some administration claims of executive power invited a judicial backlash and undermined the power of future presidents. The Supreme Court reversed the administration three times on detainee issues because Bush officials relied exclusively on executive authority for their actions. If the administration had sought congressional backing for military commissions in 2001, and later for rules to hold combatants, the resulting legal framework would probably have been upheld by the courts -- and would likely have been closer to administration goals than the eventual result.

There is a lesson here for the Barack Obama administration: Sometimes power must be lightly held to be effectively employed.

But this lesson should not be overlearned. To assume the presidency is also to assume a responsibility for the safety of Americans that Congress and interest groups will never feel as directly.

Whatever the past debates, much of the legal framework of the war on terror has been already clarified by judicial and congressional intervention.

The Foreign Intelligence Surveillance Act has largely been fixed, and few in the incoming administration seem anxious to revisit it.

On interrogation, Obama's choice is clear. The Department of Defense has already adopted restrictive standards on the treatment of all detainees -- more restrictive than the law requires. But should the DOD rules for 1.4 million soldiers, airmen, sailors and Marines be applied to the CIA treatment of a newly captured terrorist with vital information? Or should the CIA be allowed to employ still-classified, "enhanced" techniques short of torture? During his campaign, Obama promised the universal application of the DOD approach -- but this is easier for a candidate than a president to pledge.

The hardest issues concern detained terrorists. Guantanamo will and should be closed as a public diplomacy nightmare. Perhaps half of the detainees will be sent home, leaving about 100 exceptionally dangerous men. The Obama administration will need to decide on a format for trials -- much improved but politically discredited military commissions, ordinary civilian courts or some kind of national security courts created by Congress and supervised by the federal judiciary.

But the administration will not be able to try everyone. Some detainees will be too dangerous to release but too difficult to convict in a normal court setting using unclassified evidence. And any president will need the ability to hold and question newly captured terrorists outside the procedures designed for American criminals. Unless Obama returns to a simple exertion of executive authority, he will require congressional authorization to detain people. And this will expose a major tension between the new president's military responsibilities and the views of supporters who believe that detainees should only be held in preparation for trial.

By all accounts, the president-elect is taking the time to examine these issues -- and putting serious thinkers in charge of his review. Mumbai is a timely reminder that the stakes get no higher.