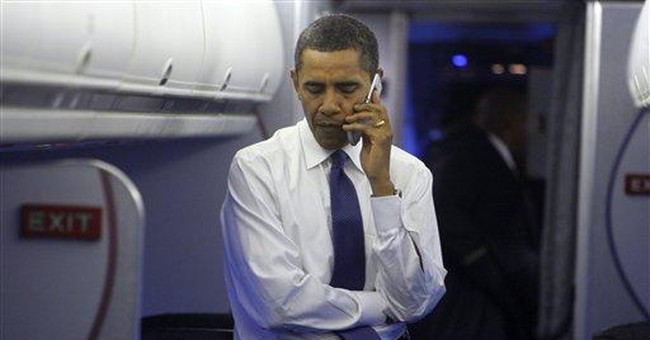 For Bill Clinton, the errors were almost immediate. By day three of his presidency, Clinton was embroiled in a losing fight to allow open homosexuality in the military. On day six, Clinton appointed his wife to formulate an ill-fated health care reform plan. Clinton's first two nominees to be attorney general were withdrawn under clouds of controversy. Surgeon General Joycelyn Elders -- that vigorous champion of the solitary pleasures -- made constant and unwelcome news. Two years after taking office, Clinton suffered a serious rebuke in midterm elections -- and became a better, more moderate president in the aftermath.

So far, President-elect Barack Obama seems to be preparing for office with characteristic care and seriousness. Future Chief of Staff Rahm Emanuel is partisan and profane -- but I'm told by Republicans I trust that he's also forthright, honest, practical and flexible enough to compromise for the sake of a deal. Names currently being floated for the Cabinet mainly consist of mainstream, skilled professionals -- with the large exception of John Kerry, mentioned for secretary of state, who should not be allowed to add the pomp of that office to his own pompousness.

But Obama will also need to be aware of certain issues -- certain tripwires -- that could trigger explosive controversy, turning suspicion into anger and undermining his broader legislative objectives.

The first tripwire concerns abortion and bioethics. With recent, ethically sound progress on deriving useful stem cells from adult sources, an executive order allowing federal support for stem cell research with "spare" embryos is unnecessary. Such an order would also be popular and unlikely to cause much backlash. But it would be a mistake for Obama to push further, using government to promote the destruction and manipulation of developing life.

There are at least 16 provisions routinely passed by Congress that limit governmental involvement in abortion and other life issues -- measures that prevent the domestic funding of abortion, forbid the use of international family planning funds for abortion, protect the rights of medical professionals to refuse involvement in the procedure and prohibit the patenting of human life. Removing this firewall between government and abortion would seem -- and be -- a massive assault on the pro-life movement. Even many Americans who consider themselves pro-choice see the use of their tax dollars to promote abortion as radical. By abandoning government neutrality on abortion, Obama would permanently embitter most with pro-life views.

The second tripwire concerns the Fairness Doctrine -- a federal regulation (overturned by the Reagan administration in 1987) requiring broadcast outlets to give equal time to opposing political viewpoints. Under this doctrine, three hours of Rush Limbaugh on a radio station would have to be balanced by three hours of his liberal equivalent. This may sound fair and balanced. But it is a classic case where the "unintended consequences" are so obvious that those consequences must be intended. It would destroy the profitability of conservative talk radio and lead other outlets to avoid political issues entirely -- actually reducing the public discussion of controversial issues. This kind of heavy-handed approach is the remnant of a time when public sources of information -- mainly the three networks and large radio stations -- were so limited that government felt compelled to guarantee balance. Given today's proliferation of media outlets, such regulation of speech is both unnecessary and Orwellian.

During the campaign, Obama signaled he did not support the reimposition of the Fairness Doctrine. But Speaker Nancy Pelosi and other Democratic leaders are big fans of this regulation. And talk radio is already preparing for a showdown. If Obama were to endorse this doctrine, even reluctantly, the resulting fireworks would obscure every other topic.

Tripwire No. 3 is the "card check" issue. Under current law, workers must have an election with a secret ballot to organize a union. Under a new approach endorsed by Obama, a secret ballot would no longer be required. A union could be created by simply collecting cards signed by workers. But we have the secret ballot for a reason: Public voting is a recipe for intimidation. If unions cannot compete in real elections, it is the fault of unions, not the fault of elections. And this change would be taken by many in the business community as a signal of Obama's deep hostility to their interests -- at a time when business cooperation will be essential on energy and health reform.

Every new president makes mistakes. But some are avoidable.