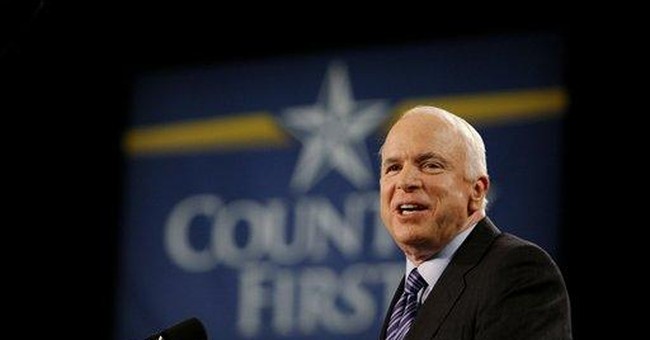 WASHINGTON -- The dramatic success of the surge in Iraq is not a central issue in the current presidential race. It did, however, set its shape -- and may help determine its outcome in an unexpected way.

John McCain won the nomination of his party, in large part, as a vindicated prophet. After visiting Iraq in the summer of 2003, he argued on "Meet the Press" that "the men and women in the military are doing a superb job. ... The problem is that they don't have enough resources. There's not enough of them, and we are in a very serious situation, in my view, a race against time." McCain added, "Time is not on our side. People in 125-degree heat with no electricity and no fuel are going to become angry in a big hurry. The sophistication of the attacks on U.S. and allied troops have increased. And what we do in the next several months will determine whether we're in a very difficult situation or not."

McCain staked his presidential prospects on a major change in Iraq policy: more troops implementing the Petraeus counterinsurgency strategy (an approach eventually, though too slowly, adopted by the Bush administration). In his biting new Commentary essay, "Liberals and the Surge," Peter Wehner recounts the elite reaction to this shift. It was variously dismissed as "genuinely bizarre," a "fantasy-based escalation," a "pipe dream," and "completely detached from reality" because "the United States has already lost."

But after early challenges, the positive results have become undeniable, as violence in Iraq has plummeted, normality has returned to markets, and neighbors and political accommodations have moved forward. McCain, it turns out, was tragically and gloriously right -- as right as Winston Churchill during his wilderness years. And McCain's come-from-behind nomination victory would have been inconceivable without this prophetic achievement.

This raises the question: If McCain benefited politically from being correct about the surge, why has Barack Obama not been punished for opposing it?

It was, after all, the single most important decision Obama has made as a public official. His judgment? "I am not persuaded that 20,000 additional troops in Iraq is going to solve the sectarian violence there. In fact, I think it will do the reverse." This initial reluctance is perhaps understandable; many shared it. But Obama persisted in his skepticism after the results became evident. Even in July of this year, he argued, "the same factors that led me to oppose the surge still hold true."

This is more than a typical political "gotcha." Obama supported measures to block the surge, either by denying funding or by imposing constraints that would have hobbled its implementation. And the results that would have flowed from a congressionally mandated failure in Iraq do not require much prophetic ability to imagine. A genocidal civil war between Sunnis and Shiites. The dominance of Iran within Iraq. The collapse of American credibility in the region. The choice of Sunni powers to either make their deal with Iran or seek nuclear weapons themselves. The gleeful celebration of al-Qaeda. The impossibility of pursuing our goals in Afghanistan and Pakistan since our allies would justly doubt our will.

Yet little blame has attached to Obama for these likely outcomes, for several reasons. Many regard Obama's judgment in opposing the Iraq War initially as sufficiently sound to cover later lapses. Obama's steady manner in the current economic crisis undermines charges of recklessness -- though his Iraq views have sometimes been reckless.

But the main reason Obama has escaped the political consequences of his poor judgment on the surge has been the success of the surge itself, which has taken the issue almost entirely off the table. In early December 2006, 44 percent of Americans said that Iraq was the most important problem faced by the president and Congress. This week, 7 percent said Iraq was the most important issue in their choice for president. A relatively peaceful Iraq is not an issue -- even for a candidate who might have thrust it into genocide.

So Obama is left with a pleasing paradox: The successes of a strategy he opposed may have paved his way to the presidency.

And McCain is left with a poignant comfort. He once said he would rather lose an election than lose a war. He may lose an election, in part, because he helped win a war.