The Man Who Stayed 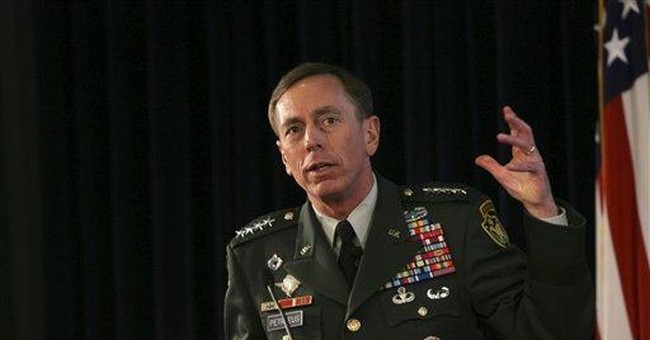 WASHINGTON -- Military success is often rewarded by the opportunity and honor of succeeding -- or failing -- on an even larger stage.

By some accounts, Gen. David Petraeus -- savior of Baghdad, deliverer of Anbar -- preferred a quieter European command as his next step toward becoming chairman of the Joint Chiefs of Staff. Instead, he was put in charge of Central Command, covering the Wild West of the world, from pirates off the Horn of Africa to Uzbek thugs in South Waziristan. It is the site of two American wars and the home base of the global jihadist revolt. It is also the region from which the next 9/11-style attack on America, if it arrives, is likely to come.

When interviewed, Petraeus does not seem like a man under burdens that would make Atlas sweat. His manner is precise and practiced. He hands out charts and graphs on counterinsurgency tactics like Halloween candy, assuming that you are eager to receive them. "If it is important," he jokes, "we have a PowerPoint slide that depicts it." Such presentations can be a substitute for actual thought. In this case, the charts express a vivid and developed worldview: There is no magic formula for fighting insurgencies drawn from Iraq. It is adaptation that leads to success. Method can overcome chaos -- but the method is improvisation.

This theory may be most severely tested in Pakistan's tribal regions, by a kind of irrational violence that defies PowerPoint summary. Pakistan's remote, impoverished North-West Frontier Province and Federally Administered Tribal Areas are administered effectively by no one. And into this vacuum of civilization has gathered a ghastly collection of killers, cutthroats and Islamist ideologues. Al-Qaeda leaders mix and marry into Afghan Taliban families. The Haqqani network launches attacks on U.S. troops within Afghanistan. The Pakistani Taliban issues threats against the White House and New York.

The war in Iraq proved it is possible -- with adequate will and resources -- to fight an insurgency by securing the population, gaining trust and intelligence, and turning local leaders against the radicals. But in Pakistan, America must encourage a counterinsurgency campaign at arm's length, through an unreliable partner who considers us unreliable as well.

Petraeus recognizes that getting the Pakistani military invested in this approach will not be swift or easy. After all, he says, "It took us years, with the best-resourced, most capable military institutions in the world."

Pakistan has decades of ties to the Taliban, which has often been its proxy in Afghanistan. And the traditional obsession of the Pakistani army has been India to its east, not the disorder of its western tribal regions. But as terrorist violence has invaded more settled parts of Pakistan, Petraeus sees a major shift. "The big idea emerging here is that the most important existential threat to the country is in the west, not the east." Though he does not foresee a role for "Americans on the ground," he argues that the "Pakistanis are determined to fight their enemies themselves. ... Not to carry out an American war on terror, but their own war against the extremists that have carried out acts of indiscriminate violence against Pakistanis."

Petraeus recognizes that there is a gap between long-term Pakistani military reform and the emergence of urgent threats to American troops and interests from the tribal regions. This gap, as recent events have shown, will occasionally be filled by American military strikes within Pakistan.

All these efforts are complicated by a tribal situation in Pakistan that may be more difficult than in Iraq. The trademark decapitations of al-Qaeda occupation can alienate traditional tribal leaders -- or intimidate and destroy them. Petraeus sees both effects along the Pakistani frontier, describing a tribal system that is damaged, but still strong enough to turn against the radicals. It seems like a thin strand holding up a weighty hope. But there is little alternative.

Petraeus emphasizes American advantages in this proxy counterinsurgency campaign, particularly the pride and effectiveness of the Pakistani military. But one of the largest advantages may be Petraeus himself. Pakistanis are deeply suspicious of American staying power in a tough fight. They tend to see our country through the prism of Somalia -- and a premature Iraqi retreat would have confirmed that image beyond question.

Petraeus may be uniquely capable of convincing our friends in the region of America's long-term commitment, precisely because he didn't leave Iraq to its fate -- because he is the man who stayed.