No Negotiations with the Taliban 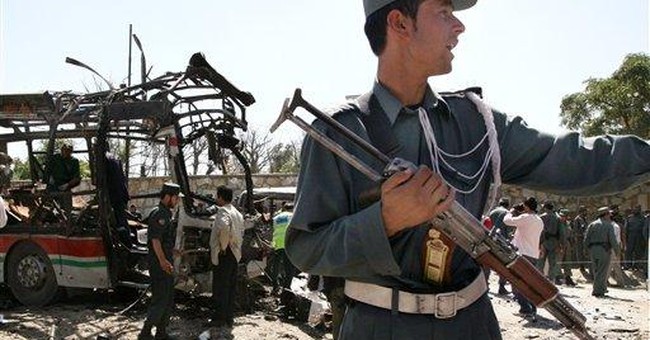 It’s time to negotiate with the Taliban says Pakistani President General Pervez Musharraf. Canada is one of our top Afghanistan allies and almost two-thirds of Canadians in a May poll think we should parlay with the Taliban. Recently Kurt Beck, the leader of the Social Democratic Party, which shares power in Germany’s coalition government, called for talks with “moderate Taliban.” Now, in apparent reaction to a perceived high number of civilian deaths caused by the Taliban strategy of hiding among them, the Afghan senate has called for a ceasefire and talks followed by withdrawal of NATO forces.

All of which shows utter ignorance of Taliban beliefs and history.

“Moderate Taliban” is an oxymoron, like referring to a lighter shade of black. The Taliban are defined by their extremism. Afghan Foreign Minister Rangin Dadfar Spanta, responding to Beck, said “I do not think there is a moderate and ‘non-moderate’ Taliban. This distinction was invented by somebody who knows nothing about Afghanistan.”

Agreeing was none other than Mullah Abdul Salam Zaeef, the former Taliban regime ambassador to Islamabad now under house arrest in Kabul. “There is no separation between Taliban as moderate, hardliner or others,” he says.

Then how about simply negotiating with the Taliban period?

To know anything about how this small subset of one ethnic group (the Pashtun) that itself comprises a minority Afghanis conquered over 90 percent of the entire country is to know the Taliban didn’t do it with military acumen. Most Taliban training is religious.

They succeeded through two means: bribes (hence their self-perceived need for Osama bin Laden and his huge purse even in the face of an American attack) and through negotiations.

Negotiation is part and parcel to a warlord society, wherein battles are expensive but talk is cheap. The Taliban negotiate with dual purposes, either to bring over a new warlord whom they keep loyal through payments or to get his followers to lay down their arms and then slaughter them.

Negotiating with the Taliban is like going to dinner with Hannibal Lector. You cannot gain. Musharraf found that out himself just last year when he negotiated a truce recognizing their right to rule much of the border Waziristan region in return for guarantees that they would neither harbor militants nor cross into Afghanistan. He kept his word; they broke theirs instantly.

And what would be offered the Taliban in Afghanistan?

One suggestion is to allow the Taliban an Afghan “mini-state” where they can practice their murderous brand of Sharia Islam. But they already have that in Waziristan and Waziristan and Afghanistan are all one country to them.

Further, they started out with an Afghan mini-state in the mid-1990s but their religious beliefs exclude any form of assimilation or tolerance, rather dictating that they expand their control to “infidels” throughout the entire country and even beyond. That’s why countries like Iran, Turkey, and Russia opposed them.

And just what part of the Afghan populace are we going to throw to the wolves?

A WorldPublicOpinion.org poll released last December showed that merely seven percent of Afghanis have a positive view of the Taliban. They have not forgotten the horrors of Taliban rule.

When I first sat in on a conversation with the Zabul region’s Mizan district chief, Mohammed Younis, during my April embed in that Pashtun area, he told us that when American or Afghani soldiers disrupted his peoples’ lives with raids “They [the people] blame it on Taliban” for prompting them. I was initially skeptical that he was just saying what we wanted to hear, but over the course of lengthy conversations (the only kind Afghanis have) I realized he was quite straightforward.

Yet ultimately we must remember that, as noble as it may sound, we did not invade Afghanistan to liberate the people. We fought to eliminate the country as a staging ground for attacks by the world’s most dangerous terrorist group, al Qaeda. That meant driving out the Taliban and keeping them out. If invited back in any form, they will absolutely guarantee that al Qaeda will not come along and it’s absolutely guaranteed they’ll be lying. Pervez, in calling for negotiations, said the West should “come and learn from us.” We have.