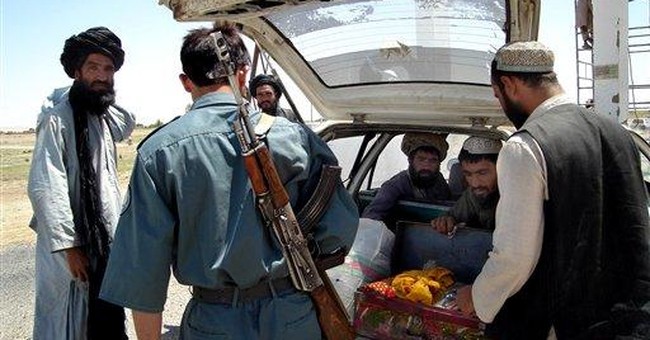 “This war is winnable.” I can’t say how often during my recent embed in the southern Afghanistan Province of Zabul, just north and east of Kandahar, I heard officers and noncoms say that. Implicit is that it's also losable; but what they really mean is winnable in comparison to Iraq.

Strange but true that Afghanistan – with four major ethnic groups, two official languages, and almost countless lesser languages – is far more of a proud, united nation than Iraq. They have Sunni and Shia, but their differences are just an excuse for a chat over chai tea. Further, while it's way too early to say if the Iraqi "surge" is working, the much-anticipated massive Taliban spring offensive in Afghanistan has thus far proved more a trickle than a deluge.

Still, as I note in my article in the June 11 Weekly Standard, “The Other War,” it would be a mistake to assume time is on our side. Afghans seem to be losing patience with the war effort, and while that may not help the Taliban (over 90 percent of Afghans dislike them), it can certainly hinder President Hamid Karzai in his efforts to keep the warlords at bay. It's warlords, not sectarianism, that pose the internal threat.

The most threatening is General Abdul Rashid Dostum, a major Northern Alliance leader against the Taliban. But before that, he fought on the side of the Soviets and the Communist government. Probably to undercut the government, which has essentially excluded him, he announced in May that he can raise an army and drive out the Taliban in six months.

Further, despite major setbacks this year, including the May 13 killing of Mullah Dadullah, a butcher frequently called "the military mastermind of the Taliban insurgency" whose headquarters were in Zabul, there have been increasing calls for negotiating with “moderate Taliban.” This includes the Afghan senate itself, which has grown weary of the Taliban tactic of hiding their forces among civilians to cause the deaths of innocents from U.S. and NATO fire. Yet the enemy itself insists “moderate Taliban” is oxymoronic.

I've only visited parts of Iraq on three occasions and part of Afghanistan, but I've seen enough to know that while the Iraq effort is awash with money but lacking in men, the war in Afghanistan is being fought on a shoestring in terms of both. There will be about 155,000 U.S. troops in Iraq when the buildup is complete, but there are only about 27,000 U.S. troops in Afghanistan, a country larger in both geography and population.

A massive concrete blast wall in Iraq is a mere mud wall in Afghanistan. "It takes four weeks here just to get cement," 1st. Lt. Keith Wei, executive officer of the American unit with which I was embedded told me. "We need to help build and to provide security, but we just don't have the funds. Everybody here understands what needs to be done but their hands are tied by a lack of resources in both funds and people. We could pacify Zabul in probably a year if they pumped money into here like they do Iraq."

Yet together, both wars plus all other defense spending consume about 3.8 percent of gross domestic product, or just over a third of the GDP percentage spent at the height of the Vietnam War. Total U.S. forces currently in both Iraq and Afghanistan amount to just a third of the 540,000 employed for the limited purpose of driving Saddam's forces out of Kuwait in 1991.

Still that might not be a problem in Afghanistan if NATO nations didn't refuse to pull their weight – in total personnel contributed, combat soldiers, or defense expenditures. Only six of 37 NATO countries with troops in Afghanistan will even allow them to fight, namely us; the U.K; Canada; the Netherlands; Romania; and tiny Estonia. Only six spend as much as 2 percent of their GDP on defense. Even as they refer to America as a bellicose "cowboy" nation, they sit back and let us and a handful of other countries expend the money and blood.

"You can see victory on the horizon," says Wei. "We just don't have the means to get there."