John Edwards vs. Babies and Moms 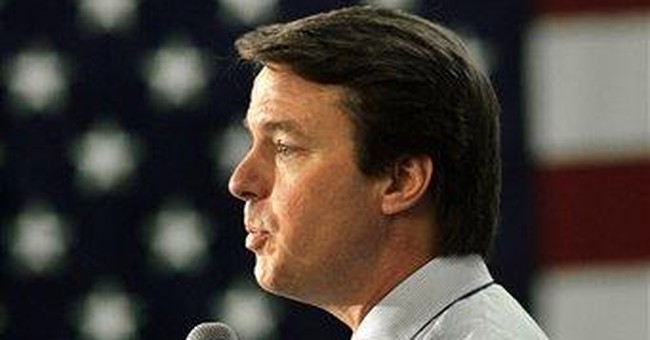 John Edwards, being neither a woman nor a racial minority, isn't doing especially well in his campaign to become the Democratic Party's candidate for the U.S. presidency. But if he were half as successful in campaigning for America's top job as he was as a trial lawyer, he might be sworn in tomorrow.

Edwards won at least 94 cases, according to Lawyers Weekly, of which 54 netted more than $1 million each. Normally attorneys take a 40 percent cut of cases that go to trial. In his last year as a practicing attorney, 1997, he reported an adjusted gross income of $11.4 million. Of course, despite their slimy reputation, trial lawyers can be on the side of right. Edwards wasn't.

Medical malpractice was his specialty, and he reportedly tried more than 60 such cases, winning more than $1 million in over half of those. Most involved Ob/gyns. Indeed, he was so feared, according to according to the Center for Public Integrity, "that doctors would settle cases for millions of dollars rather than face him at trial."

Edwards' specialty was cerebral palsy, a set of permanent conditions affecting control of movement and posture that usually appear at toddler stage. There is presently no cure. More than 10,000 U.S. children are diagnosed with it yearly. Edwards claimed the disease developed because negligent doctors ignored fetal heart monitors indicating the child might not be getting enough air during birth and thus failed to deliver it immediately through cesarean surgery.

Yet Edwards won his cases not because scientific evidence favored him but because of his smooth-talking "trust-me" demeanor – and heart-wrenching pleas in which he ghoulishly sometimes pretended to be the voice of the unfortunate child crying out for justice. Yet United Cerebral Palsy lists about a dozen ways to help prevent the condition and not one mentions the birthing procedure.

A 2003 study evaluated almost 1,000 life births to see if cerebral palsy or other problems could by affected by type of birth. Conclusion: "Delivery mode (whether vaginal or cesarean delivery) was not associated with any of the outcomes that were evaluated."

Months earlier, another study observed that cerebral palsy rates have shown "no change over 30 years" despite fetal monitoring and a huge increase in the number of C-sections. Further, "The prevalence of cerebral palsy is the same or lower in underdeveloped countries than in developed nations," even though "emergency cesarean delivery based on electronic monitor data is limited or absent."

It's bad for the mother, too. Another 2006 study, in the journal Obstetrics & Gynecology, found that moms with cesareans had more than three-and-a-half times the chance of dying shortly after childbirth than those who had vaginal delivery.

But scientific reality is but a minor hurdle to slick plaintiffs' lawyers like Edwards. Insurance companies fork over massive payments to plaintiffs and their lawyers, then pass the costs on to doctors in malpractice fees. In one state, annual Ob/gyn malpractice premiums have reached $250,000.

Many doctors are fleeing the practice as fast as they can tie off that last umbilical cord. One in seven of fellows of the American College of Obstetricians and Gynecologists have quit obstetrics and many rural areas now have no such doctors.

Further, in what's called "defensive medicine," lawsuit fears increased the number of "When in doubt, cut it out" C-sections. Cesareans in the U.S. had begun dropping in the late 1980s, going as low as 22 percent of deliveries. As Edwards and friends spread fear across the Ob/gyn land, rates have since climbed to 30.2 percent, a record high for the nation.There are probably many reasons for the increased popularity of C-sections, including convenience and avoiding the pain of labor Dr. Bruce Flamm, clinical professor of Ob/gyn at UC Irvine, told me. Still, "The biggest reason is probably the litigation issue" he said.Photos released by the Edwards campaign often feature him surrounded by his wife and kids. No doubt he loves them very much. It's too bad he thinks so little of the families of others.