The Left Continues to Mischaracterize the War 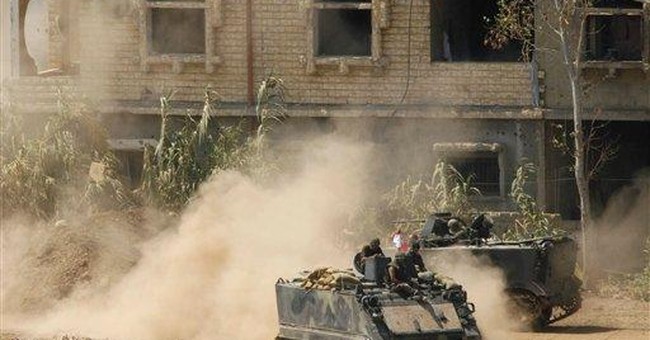 Liberals who favor withdrawing U.S. forces from Iraq believe the situation there is relatively straightforward: We are enmeshed in a civil war, a deeply-rooted sectarian conflict the outcome of which matters little to the U.S. Disengaging is the only way we can engage the real enemy -- al Qaeda and other terrorist organizations bent on our destruction -- in Afghanistan and elsewhere.

“The civil war we have on our hands in Iraq,” Sens. Hillary Rodham Clinton (D-N.Y.) and Robert Byrd (D-W.V.) opined in a recent op-ed, “is not our fight and it is not the fight Congress authorized. Iraq is at war with itself and American troops are caught in the middle.” To rising House Democratic leader Rahm Emanuel (D-Ill.), Congress faces a stark, either-or proposition: “There are those who want to police a civil war between Sunnis and Shia, and those of us who believe in fighting the war on terror. That is the choice.”

Liberals, moreover, see the present conflict as more of the same sectarian strife that has plagued the region for millennia. “The sectarian violence has only been going on for 1,327 years, ever since the battle of Karbala in 680 A.D.,” Sen. Ben Nelson (D-Neb.) observed. “The situation in Iraq,” Rep. David Scott (D-Ga.) agreed, “is a civil war compounded by civil wars that have been going on ever since Abraham, Hagar, Sarah, Isaac, Ishmael, Esau, Mohammed and his son-in-law …”

Conservatives, by contrast, see an entirely different, and more nuanced, challenge. They see many shades of gray -- centuries-old regional hatreds, yes, but hatreds complicated by foreign jihadists trained and underwritten by al Qaeda and Iran. According to Brigadier General Kevin Bergner, spokesman for the Multinational Force in Iraq, foreign fighters now account for at least 80% of Iraq’s suicide bombings. John Burns, The New York Times’ correspondent in Baghdad, explains how the nature of the Iraqi war has evolved: “The generals here who a year ago were saying quite bluntly that the biggest security threat were the [Iraqi] Shiite death squads … are saying now … that the principal threat is al Qaeda. … The principal target of the surge are those al Qaeda-linked groups.”

White House Homeland Security Adviser Fran Townsend believes the global war on terrorism and the war in Iraq “are clearly a single conflict by a single determined enemy [al Qaeda] who is looking for a safe haven.” Al Qaeda, she says, would “like to find [that safe haven] -- and bin Laden’s been quite clear on this -- in Iraq.” Thus, as Sen. Jon Kyl (R-Ariz.) emphasizes: “It is a false choice to suggest we should either be fighting in Iraq or going after Osama Bin Laden. … We cannot leave Iraq to al-Qaeda in order to go after Osama Bin Laden.” The war’s opponents, according to Sen. Joe Lieberman (I-Conn.), are really asking us to “accept an American defeat in Iraq” and “a victory for al Qaeda and Iranian-backed terrorists.”

• Iraq is close to the Persian Gulf oil fields, a high-value target for attack, and is a more useful staging area for attacks on neighboring countries and Israel.

• Baghdad was once the seat of the caliphate that al-Qaeda seeks to recreate,

• As an Arab-dominated movement, al Qaeda would find it much easier to recruit jihadists and operate from bases in Sunni Arab regions in Iraq than in Afghanistan or Pakistan, where Arab travelers stand out.

If you don’t believe Phillips, then examine the actual road map for Iraq set forth by al Qaeda’s own leaders. As Ayman al-Zawahiri, Osama bin Laden’s deputy, explained in a 2005 letter to the late head of al-Qaeda-in-Iraq, Abu Musab al-Zarqawi, “Jihad in Iraq requires several incremental goals.”

First: “Expel the Americans from Iraq.”

Second: “Establish an Islamic authority or amirate, then develop it and support it until it achieves the level of a caliphate -- over as much territory as you can to spread its power in Iraq.”

Fourth: “The clash with Israel, because Israel was established only to challenge any new Islamic entity.”

Faced with this evidence, who can seriously insist this is “not our fight”?