Fighting a war with 535 generals 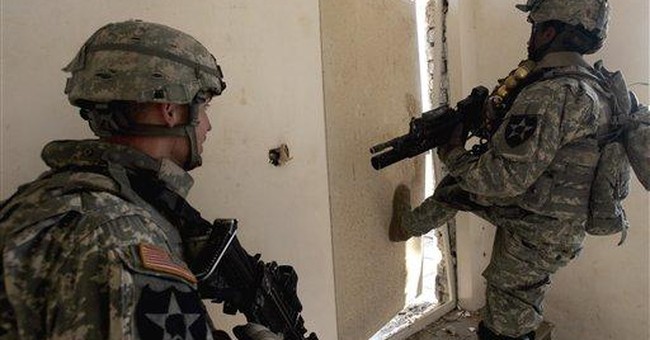 Get ready for the invasion of the armchair generals. With 535 Capitol Hill generals struggling to define every aspect of when and how our troops in Iraq may be deployed, timetables for their withdrawal and specific requirements for how, when and against whom they may strike, the challenge of winning the war in Iraq is about to get a whole lot tougher.

Historically, micromanaging wars from afar squanders opportunities to defeat the enemy. Consider the well-reported episode late in 2001 when U.S. military leaders had top Taliban and al Qaeda terrorists in the crosshairs of an armed airborne drone, only to allow them to escape thanks to what the Washington Post described as "a cumbersome approval process." This process gave military leaders in Tampa, Fla., rather than on-site field commanders, authority to approve strikes against terrorist targets. Not surprisingly, this "bottleneck" benefited terrorists at least 10 times in one six-week period. "Imagine," one officer told the Post, "you have a target in sight [and] you have to wake up people in the middle of the night, and they say, 'Uhhhhhh.'"

Especially when those groggy-eyed decision makers are lawyers. "The Central Command's top lawyer," one Air Force official acknowledged, "repeatedly refused to permit strikes even when the targets were unambiguously military in nature." These lawyers nixed the attacks out of excessive caution, reasoning that noncombatants might suffer "collateral damage."

Now, liberals in Congress have attached detailed conditions to the latest Iraq spending bill that, according to one senior White House official, may require the military "to increase the number of lawyers to scrutinize battlefield decisions by military commanders." Uhhhh, indeed.

Lawyers, by contrast, celebrate ambiguity, and there's no shortage of it in the House legislation. Even Speaker Nancy Pelosi (D.-Calif.) struggled to explain the specifics in a press conference:

Pelosi: "So we are saying unless there is progress made ... in meeting these benchmarks ... economic, political, etc., then by July of 2007, if progress is not demonstrated ... we begin the redeployment of our troops out of the combat role in Iraq.

"If by October—say, some progress is made in July—if by October, progress has not been complete, we begin the redeployment of our troops out of Iraq. And then the following year, if all the benchmarks are met, our troops are out no later than August 2008."

Question: "I am confused. . . . Is October still the crucial date? In other words, if they have not achieved the benchmarks by October, you begin the 180 days? Or does it begin in July?"

The confusion doesn't end there. Even once U.S. troops leave, section 1904 (f) of the bill allows an unspecified number of troops to remain under certain conditions. For example, they may protect U.S. diplomatic facilities, American citizens and members of our armed forces or engage in "targeted special actions limited in duration and scope to killing or capturing members of al Qaeda and other terrorist organizations with global reach."

Do we really want to condition the hot pursuit of terrorists on a lawyer's determination of whether the terrorists belong to a "terrorist organization with global reach" or are participants in a "civil war"? Would a proposed preemptive assault on a car-bomb facility be approved on the speculation that the bombs might someday be used against U.S. military or civilian personnel? Or would a lawyer reason that, because the bombs could theoretically be used for other purposes (such as suicide missions against Iraqi civilians unrelated to global terrorism), the assault couldn't go forward?

Remarkably, Democrats reject the notion that they are "micromanaging" the Commander-in-Chief's constitutional authority to make military decisions during wartime. Instead, they speak of the "collaborative process" and "shared responsibility" between Congress and the President to "redefine the mission" or enact a new "management plan" for Iraq.

For several reasons, the Founding Fathers concluded Congress shouldn't do this. As Supreme Court Justice Robert Jackson wrote, the Constitution empowers the President "to command and direct the armed forces in their immediate movements and operations."

For a Congress determined to end the war, the remedy is straightforward and simple: Cut funding to the troops. Try running that up the flag pole.