When Out of Hope, Feign Change 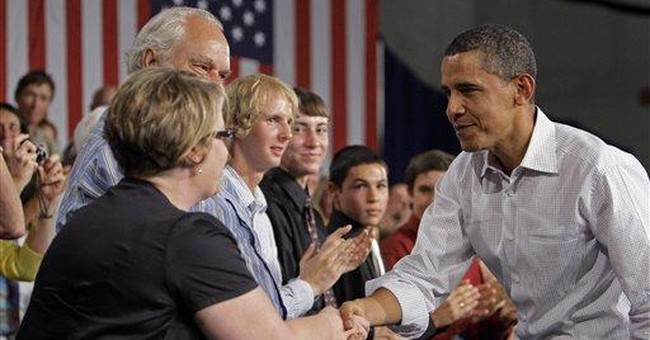 On Sunday, Health and Human Services Secretary Kathleen Sebelius said that a new government program modeled on Medicare is “not the essential element” of reform, and that the president is open to a government-chartered “co-operative.”

It was inevitable that the administration would back away from a new Medicare-like program, the demands of left-wing House Democrats notwithstanding.  For weeks, Sen. Kent Conrad (D-N.D.) has been telling the world that such a program would never pass the Senate: "There are not the votes in the Senate for the 'public option,'" Conrad recently told Fox News Sunday.  "There never have been."  The only question was when the president would distance himself from the idea.

President Obama chose this moment because he is losing the debate on health reform, and he needs to change the subject.  The administration no doubt hopes that the conversation will be about how the president has moderated his approach to health reform.

One problem: this offer doesn't make the president's health plan any more moderate.  It is an empty gesture, because the administration can now push for Sen. Conrad's "co-op" proposal as a substitute.  And a government-chartered health care "co-operative" is simply another government health program.

The definition of a cooperative is a health plan governed by its enrollees. Since a government chartered co-op won't have any enrollees at first, it will be governed by—guess who?—the Secretary of Health and Human Services, just like any other government program.

In June, Sebelius told Bloomberg.com, “You could theoretically design a co-op plan that had the same attributes as a public plan.”  In July, President Obama himself told Time magazine, “I think in theory you can imagine a co-operative meeting that definition” of a “public option.”

On a practical level, it makes no difference whether a new program adopts a "co-operative" model or any other. The government possesses so many tools for subsidizing its own program and increasing costs for private insurers—and has such a long history of subsidizing and protecting favored enterprises—that unfair advantages are inevitable.

So even if Democrats promise that someday the new program will become a co-op, what they mean is: "We're going to create that new government health program, just as we intended all along.  But we will turn it over to the members in, oh, five years or so. We promise."

That makes Sebelius’s announcement yet another cynical ploy to achieve health reform by deceiving the public.

President Obama keeps saying you'll be able to keep your current health plan, even though the Congressional Budget Office says that isn't true.  The president says a new government program wouldn't drive private insurers out of business, even though his allies expect it to do just that.  He says he wants choice and competition, yet proposes insurance regulations that would drive most private plans out of existence.  He doesn't want the government to take over the health sector, just like he didn't want to take over General Motors.  The administration pretends to distance itself from a new government program by embracing…another new government program.

The only administration sympathizer who isn't a master of deception may be New York Times columnist Paul Krugman, who describes Obamacare this way: “Basically, it’s a plan to Swissify America.”  I suppose there’s a reason Paul Krugman is not the White House press secretary.

The president’s approach to health care reform hasn’t changed at all.  All he has done is tried to distract attention from how dangerous and unpopular his approach really is.