A Devastating Poll on Obama -- and Obamacare 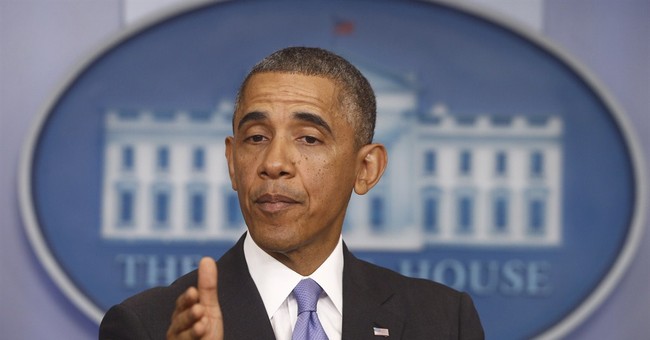 "The Affordable Care Act's political position has deteriorated dramatically over the last week." That, coming from longtime Obamacare cheerleader and Washington Post blogger Ezra Klein, was pretty strong language. And it was only Wednesday.

That was the day after the release of a devastating Quinnipiac national poll. It showed Barack Obama's approval rating at 39 percent, with his disapproval rating at 54 percent -- sharply down from 45 percent approval and 49 percent disapproval on Oct. 1, the day the government shutdown began and healthcare.gov went into (limited) operation.

Democrats hoped that Republicans would take a shellacking in public opinion for the Oct. 1-16 government shutdown. They did, briefly. But Quinnipiac's survey, conducted three weeks after the shutdown ended, indicated that the Obamacare rollout inflicted much more damage on the Democratic brand -- and the party's leader.

Quinnipiac's numbers on Obamacare were also exactly the same as their numbers on Obama: 49 percent favored the health care legislation, 55 percent were opposed. Moreover, a near-majority -- 46 percent -- said the president knowingly deceived them when he assured Americans over and over that they could keep their health insurance plans.

There are few names a president can be called that are more damaging than liar.

The numbers are particularly daunting when you look at the groups that Democratic pollster Stanley Greenberg identifies as major parts of "the big cultural and demographic wave that threatens to swamp the Republican party" -- young voters and Hispanics.

Obama carried voters under 30 by 66 percent to 32 percent in 2008 and 60 percent to 37 percent in 2010. He carried older voters by 1 point in the first election and lost them to Mitt Romney in the second.

Both groups rate him negatively on the economy, the federal budget, immigration, foreign policy and health care. Bare majorities, 51 percent of both groups, say Obama cares about people like them.

Obamacare, popular among both groups in 2012, is now an Obama albatross. Young voters oppose it 51 percent to 42 percent and Hispanics 50 percent to 44 percent. Majorities of both groups give Obama negative ratings on health care.

One must note that this is just one poll and that opinions may change as events unfold. But it looks very much like the astonishingly disastrous Obamacare rollout has moved opinion decisively against the president and his trademark policy.

And all those predictions -- not just by Democrats -- that the Republican Party faced extinction because of overwhelming opposition from Millennials and Hispanics look to be, like Mark Twain's famous obituary, premature.

The fiasco of the healthcare.gov website undoubtedly contributed to this. But perhaps Americans are also starting to notice that this president is not performing his constitutional duty to faithfully execute the law -- and in this case, a law he and his party wrote.

The Obama administration announced last July that it is not enforcing Obamacare's employer mandate. It has admitted that it cannot verify the eligibility of applicants for Obamacare subsidies. (Come and get it!)

It says it will provide subsidies for those buying insurance through the federal health care exchanges in 36 states -- even though the legislation nowhere authorizes that.

And last Thursday, as congressional Democrats were panicking and supporting measures to allow people to keep their current health insurance policies, Obama announced that he would not impose penalties on policies that don't comply with the law.

That was plainly a transparent attempt to fob off the blame for cancelled policies on insurers and state regulators who complied with the law as written. It is a political ploy inconsistent with the rule of law.

Quinnipiac and other pollsters are not in the habit of asking Americans whether presidents are faithfully executing the law. The assumption has been that, unlike in Russia, they mostly are -- or were.

The Framers of the Constitution regarded refusal to faithfully execute the law as tyranny. Barack Obama, with his Swiss cheese exceptions to Obamacare, seems to take a different view.