What to do About America's Low-Skill Workforce 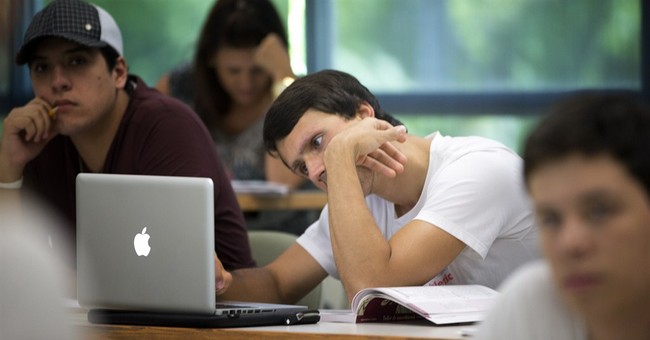 Some bad news for America, not on the political front this time, but on what corporate executives call human resources.

It's from the Organization for Economic Cooperation and Development's report on adult skills, based on 166,000 interviews in 24 economically advanced countries in 2011 and 2012.

The verdict on the United States: "weak in literacy, very poor in numeracy, but only slightly below average in problem-solving in technology-rich environments."

On literacy, just 12 percent of U.S. adults score at the top two levels, significantly lower than the 22 percent in largely monoethnic and culturally cohesive Japan and Finland. American average scores are below those in our Anglosphere cousins Australia, Canada and England and Northern Ireland.

One-sixth of Americans score at the bottom two levels, compared to 5 percent in Japan and Finland.

On numeracy the United States does even worse -- only 8 percent at the top levels and one-third in the lowest.

Americans do better at problem solving in tech-rich environments, which economist Tyler Cowen in his new book "Average Is Over" says will be of great economic value in the future.

One-third of Americans score at the top two levels, while one-third score at the bottom or lack such skills altogether.

That puts us just below the average of the countries tested. Finland, the Netherlands, Australia and Canada are well ahead.

The OECD report finds a wider range of skills in the U.S. than in other countries surveyed. Americans with only high school educations perform worse than their counterparts in all but one other nation.

And the report found that socioeconomic background is more strongly correlated with skills proficiency in this country.

In addition, there is the uncomfortable finding that disproportionate percentages of blacks and Hispanics have low skills.

Fully half of the Americans with the lowest level of literacy are Hispanic (presumably reflecting some immigrants' weak English) and another 20 percent are black.

This is probably true of other groups. In his 2012 book "Coming Apart," Charles Murray showed that the 30 percent of whites with the lowest education and income levels have low rates of family formation, little involvement in voluntary associations and high levels of substance abuse.

Another disturbing finding of the OECD is that younger age cohorts in the U.S. do not seem to have skills as high as those in the cohort just below age 65.

All of this suggests that America's economic future may not be as bright as its past -- or that the current economic doldrums may turn out to be the new normal.

What to do? The OECD sensibly calls for better education and more adult skills training. In fact, many worthy attempts have been made and are being made to improve education around the country, and some have had positive results.

Even the Obama administration, despite its political debts to teacher unions, has pitched in to some extent.

In the meantime, the United States can do something about improving skill sets by changing its immigration laws to increase high-skill immigration.

Current immigration law has inadvertently resulted in a vast low-skill migration from Latin America and especially from Mexico. Unanticipated large numbers have used the family reunification provisions to come in legally, and large numbers have crossed the border illegally.

Congress can change that by cutting back on extended family reunification, improving border enforcement and requiring use of e-Verify or other status verification technology.

More important, Congress can vastly expand high-skill immigration. The Senate bill passed last spring goes some distance toward this, but not far enough.

The U.S. should take a lesson from its Anglosphere cousins Australia and Canada, which both have higher immigration proportionate to population and which both outscored the U.S. in literacy, numeracy and high-tech problem solving in the OECD survey.

Australia and Canada allocate large shares of their immigration flow by point systems, which give credit for educational achievement and marketable skills. They do not necessarily tie high-skill immigrants to a single petitioning employer, as H-1B visas do in the U.S.

Both countries are attracting high-skill immigrants, especially from China and India, and both have had better performing economies than the U.S. does.

Making a concerted effort to attract high-skill immigrants should be a no-brainer for America.