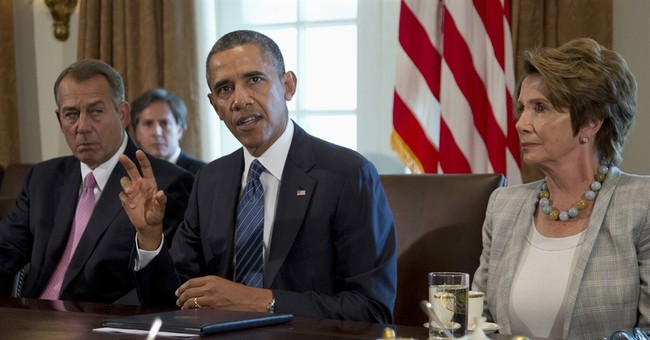 Presidents tend to set the agenda for their parties. Most of the party's members of Congress tend to go along.

This has been increasingly the case as Americans over the last two decades have got out of the habit of splitting their tickets and have voted, in proportions not seen since the 1940s, entirely for candidates of one party or the other.

When Barack Obama first took the oath of office in January 2009, his fellow Democrats, with their large majorities in Congress, hurried to pass his key legislation.

The $787 billion stimulus package was passed in February. In June, the House of Representatives passed cap-and-trade legislation intended to reduce carbon emissions.

Obamacare took longer and was nearly derailed when Republican Scott Brown won the special Senate election in Massachusetts in January 2010. But in March, Speaker Nancy Pelosi and Obama rallied the House of Representatives to pass it anyway.

The large majority of Democrats voted for all three. Some paid a political price when Democrats lost 63 House seats in November 2010. But even after that, almost all Democrats continued to support Obama's positions on major issues.

Democratic voters went along, too. The 2012 exit poll shows that 92 percent of Democrats voted for Obama.

Now, suddenly, we are seeing some signs of Democratic discontent. The revelations of National Security Agency surveillance disturbed many Democratic voters and a not-inconsiderable number of Democratic senators and congressmen.

This was not the change they were seeking.

In the past two weeks, congressional Democrats have done more than express dismay. They have stymied two presidential initiatives on important public policies.

After Obama called for a congressional authorization of the use of military force in Syria, Democrats did not line up in large numbers in support. The whip counts of various news organizations and blogs showed some Democrats opposed and many Senate Democrats and most House Democrats as uncommitted.

The White House might have lined up enough to pass a resolution in the Senate. But with most House Republicans opposed, that seemed impossible in the lower chamber.

Obama's policy turnaround might of made this academic. Perhaps the unwillingness of Democrats to accept this agenda item may have undermined the credibility of any presidential threat to use force in Syria or elsewhere.

Congressional Democrats also prevented Obama from nominating the person he evidently wanted for one of the most important jobs a president can fill, chairman of the Federal Reserve.

In a television interview in June, Obama signaled that current chairman Ben Bernanke would retire -- or at least not be renominated.

When attacks were launched on his former economic counselor and Clinton administration treasury secretary, Lawrence Summers, Obama responded with angry defenses. His body language suggested Summers was his choice.

Summers might have been confirmable in July. But there was a crescendo of opposition in left-wing blogs. Many on the feminist left endorsed Janet Yellen, currently Fed vice chairman and like Summers, an economist of genuine intellectual heft.

Last week, four of the 14 Democrats on the Senate Banking Committee came out against Summers. That meant that confirmation would require the other 10 Democrats and at least a few of the 10 Republicans.

You don't have to be an economist of genuine intellectual heft to read those numbers. On Sunday, Summers withdrew -- or was persuaded to withdraw -- from consideration.

One reason for Democrats' discontent with Obama is that he doesn't schmooze with them. As Tip O'Neill used to say, people like to be asked. Obama doesn't like to ask.

Much more important, many Democrats have principled reasons for opposing Obama on NSA, Syria and Summers.

Critics of George W. Bush's war on terror have reason to oppose Obama on NSA and Syria. Economist populists have reason to block a Fed chairman with recent Wall Street ties who is associated with moderate Clinton policies.

The danger for Obama is that he may lose his party base, as Bush did after Katrina and the Supreme Court nomination of Harriet Miers. In which case, his job approval could plummet below the current 44 percent, as Bush's did.

A president with low approval still has executive powers. But he no longer sets the agenda for his party.