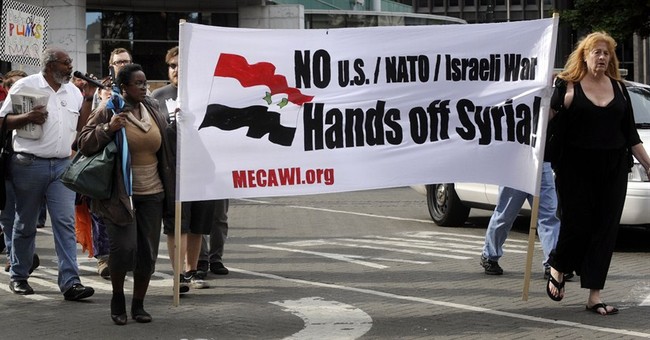 Trending
Hovering over the congressional debate on whether to authorize the use of military force in Syria is the specter of Iraq.

It hung even more menacingly over the debate in the British House of Commons Aug. 29 when a 285-272 majority voted against granting the government such authority.

Yes, both American and British intelligence estimated with high confidence that Saddam Hussein had active weapons of mass destruction. And, yes, after Saddam's downfall coalition forces did not find caches of nuclear or biological weapons, though some evidence of chemical weapons were found.

But intelligence is inevitably an inexact science. And there was strong circumstantial evidence to believe that Saddam was seeking WMDs.

He had, after all, developed and used chemical weapons against his own people in the 1980s. After the Gulf War in 1991, coalition forces found that he had a nuclear weapons program and it was more advanced than had been estimated.

Then between 1991 and 2002, he continually resisted and frustrated international inspection efforts. The obvious conclusion was that he had something to hide.

So back in 2002, no responsible leader could have concluded with certainty that Saddam was not developing WMDs again.

That did not necessarily mean leaders had to support military action. Rational arguments against that were made in the U.S. Congress and the British Parliament.

Military action is always risky but a reasonable person could conclude it was riskier to leave Saddam in power. That doesn't mean that George W. Bush and Tony Blair lied about the intelligence.

How did the idea that we were lied into war become so widely accepted?

One reason is that in America Democrats adopted it as gospel. Many of them regarded Bush's election as illegitimate, even though every newspaper recount still showed him ahead, barely, in Florida.

Democrats also deeply resented Bush's insistence on a vote on the Iraq War resolution in October 2002, a month before the midterm election and at a time when support for military action was about 70 percent in polls.

That put Democratic officeholders in the position of antagonizing either their antiwar party base or the majority of voters. Democratic leaders such as Hillary Clinton, Joe Biden, John Kerry and (remember him?) John Edwards chose to go with majority opinion -- and came to rue it when unknown antiwar candidates such as Howard Dean and, later, Barack Obama shot upward in presidential primary polls.

So when things in Iraq started to go badly, they were happy to suggest that they had been deceived into voting for war by an increasingly less popular president.

Another reason for the strength of the "Bush lied" meme is that Bush and his appointees did not effectively defend themselves against the charge.

Bush's press secretary repudiated the "sixteen words" in a Bush speech that simply recited a British intelligence conclusion, which the Brits never withdrew. And the Bush people did not push back on the ridiculous claim by former diplomat Joseph Wilson that he had proved Saddam Hussein's regime never sought WMD materials in Africa.

Nor was Team Bush successful in refuting the charge that it had violated espionage law by revealing the identity of Wilson's wife, Valerie Plame. The press took up the charge with glee and the administration official who could have refuted it, Deputy Secretary of State Richard Armitage, chose to stay mum.

They point to the unlikely possibility that Assad opponents could have done so and demand the kind of evidence of guilt beyond a reasonable doubt that is rightly required in domestic criminal trials. But it's obviously impossible to provide such evidence in a war zone like Syria.

In foreign affairs, decision-makers must act on imperfect information and on the basis of probabilities. They must keep in mind a lesson taught by history, that the course of military action is always unpredictable and subject to sudden reversal.

There are serious arguments for and against authorizing military action in Syria. The argument that the allies were lied into war in Iraq is not one of them.