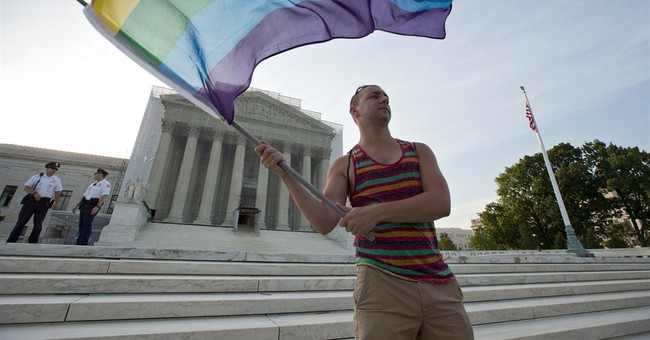 This has been a big week for the Supreme Court. In four separate cases, it applied stricter scrutiny to racial quotas and preferences in higher education, overturned part of the Voting Rights Act, ruled unconstitutional the Defense of Marriage Act and dismissed an appeal of a case overturning California voters' ban on same-sex marriage.

At the same time, it pointedly declined to declare that there is a constitutional right to same-sex marriage.

Only one of the four cases was decided by the familiar 5-4 split between supposedly conservative and supposedly liberal justices. In the other three, as often this year, there were different lineups.

The common thread I see is that this is a court that has mostly tried to keep the three branches of the federal government and the states from interfering with each other.

This was arguably true in Fisher v. University of Texas, the case on racial preferences in college and university admissions. The decision was written by Justice Anthony Kennedy, who had dissented from the 2003 decision allowing quotas.

But Kennedy declined to rule them out altogether, as Justice Clarence Thomas urged. Rather, Kennedy said courts should apply "strict scrutiny" to preferences that must be "narrowly tailored," as he argued in his 2003 dissent.

Justice Stephen Breyer, in the majority then, agreed with this narrowing, forming a 7-1 majority. Only Justice Ruth Bader Ginsburg dissented.

Fisher may discourage schools from employing racial quotas, and it could lead them to consider giving preferences to disadvantage applicants not classified as black or Hispanic. That could result in less litigation.

The court did strike down a federal law in Shelby County v. Holder, Section 4 of the Voting Rights Act. That provision requires certain states and localities, based on low black turnout in elections between 1964 and 1972 (mostly but not all in the South), to get pre-clearance of any election law changes from the federal Justice Department.

The criteria make no sense today and Congress should write new ones, Chief Justice John Roberts wrote. The problem is that today, black turnout rates are higher than white ones in Mississippi, while the state where they lag farthest behind is Massachusetts.

So Congress may not be able to come up with new criteria. That would mean less federal interference with the states. Individuals and the Justice Department can still sue to stop racial discrimination in voting where it exists under Section 2.

The Defense of Marriage Act, signed by Bill Clinton in 1996, bars the federal government from recognizing same-sex marriages authorized by states, and allows states not to recognize same-sex marriages from other states. It was overturned 5-4 in U.S. v. Windsor, written by Kennedy.

That means that same-sex couples can file joint federal tax returns and qualify for the spousal exemption in federal estate tax.

It may mean that same-sex couples can get divorces in states that don't allow them to marry. It may overturn any state law barring same-sex couples from adopting children. Other wrinkles are left to the states to sort out.

But the court was unwilling to impose same-sex marriage on states that don't want it. That was the practical effect of Perry v. Hollingsworth, which left in place a California federal trial court decision overturning California's Proposition 8, which banned same-sex marriage.

The state declined to defend the law on appeal, and the chief justice wrote that the private parties who appealed lacked the standing to do so. He got the votes of the unusual coalition of justices Antonin Scalia, Ruth Bader Ginsburg, Stephen Breyer and Elena Kagan.

Ginsburg supports Roe v. Wade but has spoken with some concern about the furor the court caused by legalizing abortion across the nation. She and some colleagues may have dreaded a similar furor if the court legalized same-sex marriage everywhere.

The practical effect is that California now has same-sex marriage. But polls indicate that California voters stood ready to reverse Proposition 8's narrow 52 to 48 percent margin if the issue again got on the ballot.