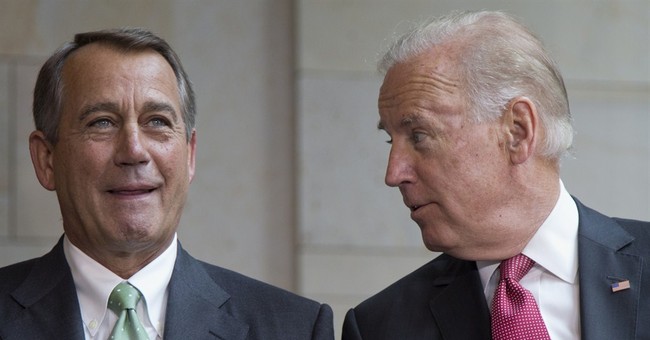 The two political parties are in disarray. The Democrats are disheartened. The Republicans are disunited.

Start with (because they're first in alphabetical order) the Democrats. The Barack Obama they were so enthusiastic about in 2008 has been disappointing many of them lately.

Not many happy Obama voters envisioned last November that his presidency would be faced with multiple scandals six months later.

During the campaign, most of the media provided voters with little information about the murder of Ambassador Christopher Stevens and three other Americans in Benghazi.

But now it's apparent to anyone paying attention that Obama and Hillary Clinton repeatedly misled Americans about the nature of the attack and their response.

Strong partisans try to ignore that kind of information about their leader. But it's getting harder to do so.

It's even harder to ignore the Justice Department's actions against The Associated Press and Fox News's James Rosen. (Disclosure: I'm a Fox News contributor.)

As for the Internal Revenue Service's targeting of conservative groups, prominent Democratic officeholders, including Obama, have appropriately condemned it. Polls suggest that most Democratic voters take that view, as well.

And then there's the news that the National Security Agency has been data mining and intercepting communications between suspected terrorists abroad and persons in the United States.

The latter used to be called "domestic wiretapping" during the Bush administration. Barack Obama denounced it vigorously.

But as president he's kept it up and now, perfunctorily, defends it. History shows that there is more continuity to U.S. foreign and defense policy than partisan rhetoric suggests. But Democratic voters were led to expect discontinuity -- "hope and change." Many are surely disheartened by this and by his decision to provide some arms to Syrian rebels.

Democrats' disillusion comes on top of some disenchantment during Obama's first term. Sluggish economy growth and the unpopularity of Obamacare contributed to that.

It's been little noticed, but Obama got 3.6 million fewer votes in 2012 than he did in 2008. In contrast, George W. Bush was re-elected with 11.6 million more votes than he won four years before.

Obama's job approval now is just about identical to Bush's at this point in his second term. It may not fall as far as Bush's did. But the numbers and the news don't suggest that Democrats will flock enthusiastically to the polls in 2014 and 2016.

At the same time, it's not apparent that Republican voters are taking heart from these developments. Their party seems divided even more than is usual for a party that's been out of the White House for five years.

Republicans are split on immigration, with Sen. Marco Rubio of Florida rallying the Senate Gang of Eight bill and other Republicans denouncing it as amnesty. They're divided, as we saw in the House last week, on the farm/food stamps bill.

They're divided especially on foreign policy. Sen. John McCain of Arizona and others labeled as neoconservatives have long called for military aid -- perhaps a no-fly zone -- for the Syrian rebels. They've defended the administration's surveillance programs.

Sen. Rand Paul of Kentucky, who has been shrewdly seeking attention, takes an opposite view. He's against involvement in the Middle East and decries the use of drones and data mining.

Republicans had a weak field of presidential candidates in 2012, and the strongest of them, Mitt Romney, won only 1 million more votes than McCain had in 2008.

The party seems likely to have a much stronger field in 2016 -- and one with a wide range of positions and platforms.

House Budget Chairman Paul Ryan of Wisconsin has put forward fiscal plans that have been backed by almost all House Republicans. But there could still be wide disagreement on economic issues in the presidential primaries.

There could be disagreement on health care, as well. No one is sure how the rollout of Obamacare will go. It could be a disaster, or it could produce just minor "glitches and bumps," in the president's words.

Republican politicians are united in opposing Obamacare. They are, unsurprisingly, not united on how to respond to a rollout that hasn't happened yet.

Often one of the two major parties is in disarray. Today, unusually, both of them are.