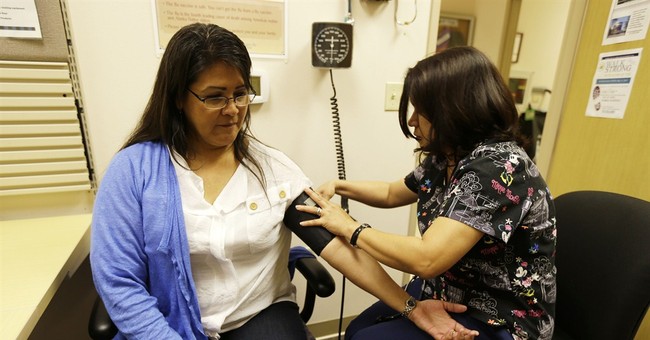 Does having health insurance make people healthier? It's widely assumed that it does.

Obamacare advocates repeatedly said that its expansion of Medicaid would save thousands of lives a year. Obamacare critics seldom challenged the idea that increased insurance coverage would improve at least some people's health.

Now, out of Oregon, comes a study that casts doubt on the premise that insurance improves health.

In 2008, Oregon state government had enough Medicaid money to extend the program to 10,000 people but many more were eligible. So the state set up a lottery to determine who would get coverage.

That created a randomized control trial (RCT), to compare the health outcomes of about 6,000 people who won the lottery with a similar number who lost.

RCTs are the best way to test the effects of public policies, as Jim Manzi argues in his recent book "Uncontrolled: The Surprising Payoff of Trial-and-Error for Business, Politics and Society."

Other studies compare the effect of policies on populations that may differ in significant ways -- apples and oranges. RCTs compare apples and apples.

The only previous RCT on health care policies was conducted by the RAND Corporation between 1971 and 1982. It found no statistically significant difference in health outcomes from having more insurance. But health care has changed a lot since then.

The Oregon Health Study, published last month in the New England Journal of Medicine, found much the same thing. Comparing three important measures -- blood sugar levels, blood pressure and cholesterol levels -- It found no significant difference after two years between those on Medicaid and those who were uninsured.

It did find lower levels of reported depression among the group on Medicaid. And it found, unsurprisingly, that they did save significant money. Those findings may not be unrelated.

The findings have serious implications for Obamacare. Half of its predicted increase in insurance coverage comes from expansion of Medicaid.

Obamacare supporters have assumed that those eligible for Medicaid -- poorer, sicker and less steadier in habits than the general population -- would have great difficulty getting health care without insurance.

The Oregon Health Study is evidence that at least in that state Medicaid-eligible people without insurance -- a "pretty sick" population, one state official said -- nevertheless managed somehow to get care that produced results about as good as those who won the lottery.

It may just be that ordinary people, even those with significant problems, are more capable of navigating the seas of American life than elites, either liberal or conservative, tend to assume.

These results run contrary to the predictions of many Obamacare fans, who expected to see more positive effects from Medicaid coverage. It undermines at least a little the case for Obamacare's vast expansion of Medicaid.

Some Obamacare backers, and others as well, point out that the study did not measure all possible health care outcomes. It couldn't because it covered only two years; and Oregon, with more Medicaid money, ended the lottery experiment, so there won't be any more RCT results.

In particular, in a two-year period you aren't going to have too many cases of catastrophic illness among a population of 12,000. There's no way you can measure outcomes in those with long-running ailments like cancer, Parkinson's disease or Alzheimer's.

But that is another way of saying that health insurance as we know it may not do much to improve the treatment of common health problems.

Most U.S. health insurance today, thanks to the tax preference for employer-provided insurance, is not real insurance at all.

Real insurance pays for rare, expensive and unwelcome events, like your house burning down. It doesn't make sense to insure for routine expenses, like repainting your living room.

The Oregon Health Study suggests that insurance isn't necessary for people to get what are now, for people of a certain age, routine measures like blood pressure medicine. Maybe government should help poor people pay for them, but they manage to get them nevertheless.

Americans have come to expect health insurance to pay for routine treatments. Obamacare reinforces that in its requirements for coverage and makes it more difficult for many to insure against catastrophic health care expenses.