America Will Pay a Price for President Obama's Inaction in Syria 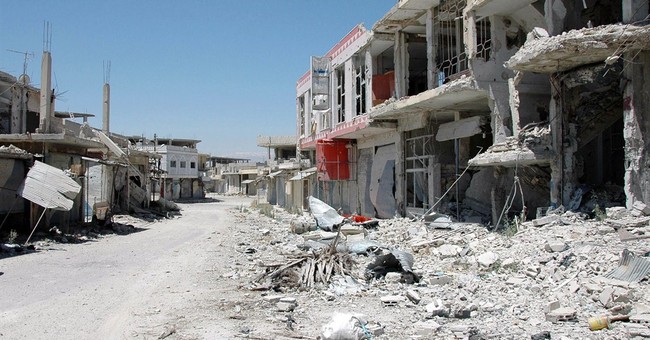 Trending
Barack Obama's appointments of Susan Rice as national security adviser and Samantha Power as ambassador to the United Nations have naturally triggered speculation about changes in foreign policy.

Rice and Power have been proponents of humanitarian military intervention, a course that Obama followed, gingerly, in Libya -- "leading from behind," as one of his aides put it.

But of course that didn't work out so well. The murder of Ambassador Christopher Stevens and three other Americans in Benghazi last September showed that terrorists have a free hand in Libya -- even if the president and Rice, along with Secretary of State Hillary Clinton, managed to mislead Americans during campaign season by suggesting the attack resulted from a spontaneous protest of an anti-Muslim video.

After Libya, Obama seemed without appetite to intervene in the much more strategically important Syria. It borders both Israel and Iraq. Under Bashir Assad, it has been an ally of Iran and of the terrorist group Hezbollah, which has held sway in Lebanon and the Gaza Strip.

Getting a Syrian regime that would end ties with Iran would be very much in America's interest. Getting a regime dominated by Islamist terrorists and inclined, unlike Assad's, to launch military attacks on Israel would be very harmful.

Obama expected that Syrian President Bashir Assad would be ousted quickly, as the leaders of Libya and Egypt were. That expectation was widely shared, but history shows that things don't always work out as leaders expect.

In frustration, Obama called for Assad's ouster. But he has declined to declare a no-fly zone over Syria, as Bill Clinton did over Serbia and Iraq, and has declined to provide aid to democratically inclined Syrian rebels.

To be fair, it's hard to identify such people. There are risks to any intervention, as Americans learned in Iraq. The president was faced, as presidents often are, with no easy or clear choices.

Today, two years after the rising against Assad, and after some 80,000 Syrian deaths, the options look even more unpalatable. The dominant rebels seem increasingly hostile to our interests, and the Assad regime may be on the verge of military victory.

But in retrospect Obama seems to have followed the opposite of Teddy Roosevelt's advice. He has spoken loudly and wielded a very tiny stick.

For this he seems likely to pay no great political price back home. Polls show he gets negative ratings on many domestic issues -- especially health care -- and is being hurt by the IRS targeting of conservative groups and the Justice Department's subpoena of press phone records. But on foreign policy, his ratings are still positive.

Few Republicans have shown the stomach to call for a more muscular policy in Syria. They seem to recognize that most Americans, and most Republican voters, have no stomach for much in the way of military interventions after Iraq and Afghanistan.

Republican voters and politicians did support George W. Bush's efforts there. But when Bill Clinton was president, many Republican politicians and voters opposed his actions in Serbia and Kosovo. Bush himself promised a more "humble" foreign policy in the 2000 campaign.

And House Republicans did not, as Obama expected, give in to his demands for higher taxes and were willing to let the sequester defense cuts go into effect, instead. Their constituents do not seem to mind.

The nation seems to be going through one of those periods where Americans are sick and tired of military involvement and prefer to let conflicts fester in far-off lands of which they know very little.

Revulsion at the horrors of World War I led to a period of isolationism starting under the Republicans in the 1920s and reaching a high point in the first years of Franklin Roosevelt's presidency.

The Democratic Party, which had been the more hawkish party from 1917 to 1967, became the more dovish party after its opposition to the Vietnam War, even though the conflict was escalated by Democratic presidents and de-escalated by Republican Richard Nixon.

Eventually American leaders and the American people come to realize that non-intervention has a price. Franklin Roosevelt led America to victory over Nazi Germany and Japan. Ronald Reagan led America to an almost bloodless victory in the Cold War.

Obama seems likely to continue his policy of inaction in Syria, for which America will probably pay a price -- if not immediately, then some time in the future.