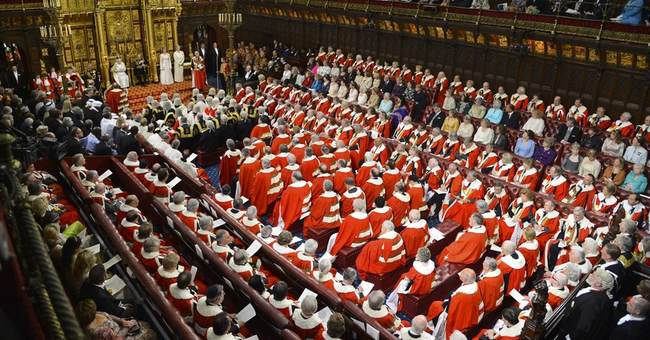 A thoughtful reformer targets the traditional rules of an aging institution that has retarded progress in the past. Time to modernize those rules, the reformer says, and prevent obstruction in the future.

The trouble is that such reform efforts often prove counterproductive. New rules strengthen rather than weaken the aging institution. Unintended consequences abound.

Three examples come to mind, the first from far away -- the British House of Lords.

After Tony Blair's Labor Party was swept into office in 1997, it decided to reform the House of Lords. Its hereditary members were overwhelmingly Conservative and could outvote the appointed life peers of various parties.

The Lords could not veto legislation -- it threatened to do so in 1910, and the power was taken away -- but could delay or amend it, sometimes obstructing or frustrating the democratically elected House of Commons.

So Blair decided to take the vote away from all but 90 of the hereditary lords and appoint enough life peers so that no party would have a majority. He made that deal with the Conservative Party leader in the Lords, Robert Cranborne, in 1999.

As Cranborne (now the Marquis of Salisbury) predicted back then, the reform increased the power of the Lords. When Conservatives had an eternal majority, they were extremely reluctant to amend or delay legislation. It seemed outrageously unfair for one party to have such power.

But the current Lords, with no party in majority, has been much more eager to amend and delay. Threats to do so have pushed governments to make changes in the Commons to appease the Lords.

So the effort to reduce the Lords' powers enhanced them, instead.

Something similar has happened with the U.S. Senate's filibuster. In the 1970s, Sen. Walter Mondale, a thoughtful center-left politician like Blair, wanted to curb the power of the filibuster, which had made it so difficult to pass civil rights legislation in the 1950s and 1960s.

So he pushed to reduce the number of senators needed to end a filibuster from 67 to 60. The idea was to make it easier to defeat filibusters.

But it has also made filibusters much more common and sometimes more effective. A tactic used only occasionally by a defunct regional bloc (Southern segregationists) on an issue of great importance became a tactic used regularly by the minority party on more routine measures.

As with the House of Lords, if you make a power seem less menacing, it will be exercised on more occasions and for more purposes.

Some now urge that filibusters be abolished altogether or somehow restricted. The result is likely to be development of other devices available under Senate rules to achieve similar objectives.

There has been a similar phenomenon in the efforts over the years to limit the influence of money in electoral politics. Going back more than 100 years, Congress and state legislatures have tried to build dams to stop vast rivers of money flowing downstream into campaigns.

The result is that slowly moving rivulets are steered into other channels, then rush in vast torrents down slopes into supposedly forbidden landscape.

To switch from watery metaphor to legal analysis, there is an inevitable tension between campaign finance limitations and the First Amendment. Supreme Court justices may try to limit its protections to student armbands, nude dancing and flag burning. But its real purpose is to protect political speech -- which costs money.

Much of the impetus for campaign finance limitations came from those who fear that the rich will give one party an insuperable advantage in election after election.

Half a century ago, Republicans seemed to have such an advantage. But those days are gone.

What has happened instead is that, as political spending has zoomed past intended limits, citizens acting on calculation or conviction have been donating about equal amounts to both parties.

In response to new restrictions, they do so increasingly without disclosure. So campaign finance reform has resulted in more money and less accountability.

Lesson: Unless you're prepared to abolish entirely the House of Lords (as Oliver Cromwell did in the 1650s) or the U.S. Senate, or ban private campaign spending, there's a good chance that any reform you make will exacerbate rather than alleviate the things you dislike.

Especially if you're refighting the battles of the past rather than anticipating how institutions will adapt to the future. Reform sometimes makes thing worse.