Obama's Blink on Syria Could Bring Peril to Allies 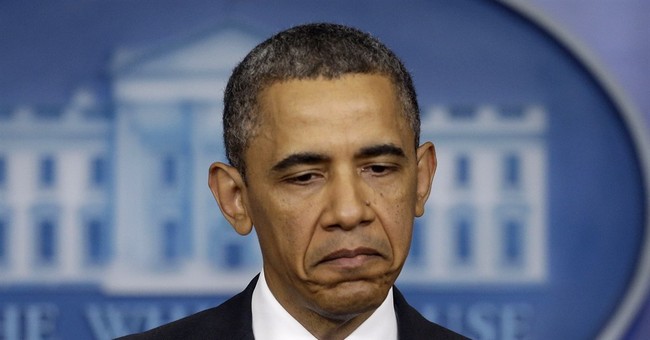 Trending
"We're eyeball to eyeball, and I think the other fellow just blinked," Secretary of State Dean Rusk famously said during the Cuban missile crisis.

Barack Obama has been doing a lot of blinking lately. On Syria especially.

Presumably the president hoped that his statement would deter Bashar Assad's embattled regime from using chemical weapons. And presumably he hoped that his demand in 2011 for Assad to relinquish power would be obeyed.

Obama surely hoped back then that the Syrian dictator would be overthrown quickly, as his counterparts in Tunisia, Egypt and Libya had been. Unfortunately, Assad has proved to be tougher and more ruthless.

Last December, the U.S. consul in Istanbul reported evidence of chemical gas attacks in Syria to the State Department. Last week, it was reported that all U.S. intelligence agencies believe that sarin gas has been deployed there.

But Obama has been unwilling to change his policies significantly. He has not ordered imposition of a no-fly zone, as Bill Clinton did in Kosovo in the 1990s.

He has not pledged support for the Syrian rebels. Instead, he has indicated that intelligence "assessments" are not conclusive.

"We've got to do everything we can to investigate and establish with some certainty" -- an interesting standard -- "what exactly has happened in Syria," he said at a press conference on Tuesday.

"We will use all the assets and resources that we have at our disposal. We'll work with the neighboring countries to see whether we can establish a clear baseline of facts. And we've also called on the United Nations to investigate."

These are conditions that seem impossible to meet. The United Nations will not act because of the veto of Assad-supporting Russia.

Other nations' intelligence services have already chimed in, concluding that chemical weapons are indeed being used in Syria. Our ability to "investigate and establish with some certainty what exactly has happened in Syria" is limited.

This president, like his predecessors, has to make decisions based on incomplete and imperfect information. It comes with the job.

The red line has been crossed, but the president has decided not to change the game.

This could have perilous consequences. Will Israeli leaders take seriously Obama's pledge that he will not allow Iran to deploy nuclear weapons?

Will our Asian allies be confident of our backing in their disputes with China over islets in the East China Sea? Will China be deterred from attacking them?

Blinking at the evidence that Syria has crossed what he called a "red line," Obama may be hoping to avoid getting bogged down in a military quagmire there. But weakness is provocative, and appeasement can lead to a wider war.

Last week, Obama also blinked on the sequester, as Senate Democrats led the charge to give the Federal Aviation Administration explicit flexibility after the agency furloughed air traffic controllers.

He had said earlier that he would veto legislation giving administrators flexibility in adapting to spending cuts. But -- blink -- he signed the bill, instead.

That's probably right. Obama's prediction of dire consequences from sequester cuts was undermined by the administration's two most visible cuts in service.

And the idea that a 4 percent cut in FAA funding required delaying 40 percent of airline flights was equally laughable.

It antagonized two classes of strategically placed frequent flyers: members of Congress and members of the press. No way they were going to tolerate needless flight delays.

Obama's acceptance of the sequester means ratcheting spending levels down in the future, just as the Obama Democrats' stimulus package ratcheted spending up.

That's a policy defeat for liberals, but the general public will probably not suffer much from Obama's sequester blink. The consequences of his Syria blink could be much more ominous.