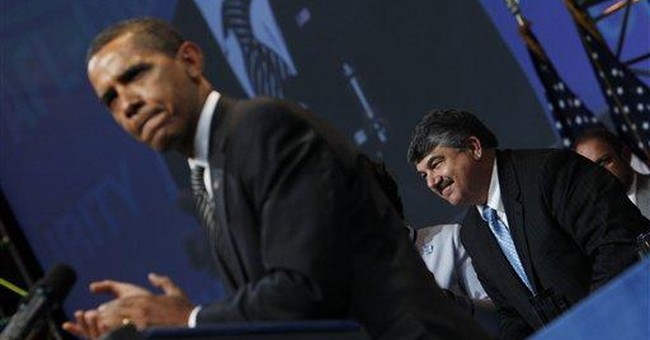 One of the interesting things about the Obama administration is the strange dominance of labor unions. Yes, Barack Obama and other Democratic leaders do owe the unions something: Unions gave $400 million to Democrats in the 2008 campaign cycle, and they expect to get something in return.

What they haven't gotten out of the Democratic Congress is the thing they wanted most -- the card check bill that would effectively abolish the secret ballot in unionization elections. Unions now represent only 7 percent of private-sector workers, the lowest percentage since the early 1930s. Union leaders believe that with card check they could vastly increase their dues income.

But the unions have gotten lots of other things, as Peyton R. Miller reports in The Weekly Standard. Obama has appointed as head of the National Labor Relations Board a former union lawyer who once wrote that the NLRB could institute something very much like card check without congressional action.

An Obama appointee has changed the National Mediation Board's rules in a way designed to produce more strikes by airline and railroad union members.

Obama executive orders have encouraged unionization by employees of government contractors and the seniority-based promotion practices preferred by union leaders. Obama has granted a 35 percent tariff on Chinese tires sought by the United Steelworkers and, in contravention of the North American Free Trade Agreement, has blocked Mexican trucks from U.S. roads as demanded by the Teamsters Union.

The Democrats' stimulus package includes Davis-Bacon requirements that union wages be paid on construction jobs, which means that the government will pay more or get less production than it would if contractors were free to pay market wages. The complex Davis-Bacon process also means huge delays in getting supposedly shovel-ready projects underway.

And Obama Democrats are trying to force FedEx to become unionized by subjecting it to the same law as unionized UPS.

Meanwhile, one-third of the stimulus money went to state and local governments, with the effect of propping up the pay and saving the jobs of public employee union members. As a result, while 8 million private-sector jobs have disappeared, the number of public-sector jobs has barely budged.

The cynical will see these measures as a political payoff and might venture that the unions have gotten something like a hundredfold payout for the $400 million they gave to Obama and his copartisans.

Those who insist on looking for purer motives, in contrast, might see something potentially more sinister. They might see a former community organizer acting out of a sincere conviction that America would be better off with a much, much larger unionized private sector.

That prompts the question of what the private sector would look like if nearly half its workers were union members, as is the case now with the public sector.

As one who grew up in Detroit in the heyday of the Big Three auto companies and the United Auto Workers, I have some idea what the answer would be.

Adversarial unionism, as prescribed by the New Deal-era Wagner Act, would mean an end to management flexibility and the cooperative management techniques employed by, among others, the foreign-based auto manufacturers. UAW contracts had some 5,000 pages of work rules; if any were violated, the shop steward could shut down the assembly line.

We know how that story turned out. It took the U.S. manufacturers multiple decades to achieve quality levels comparable to those their foreign-based competitors achieved with American workers.

We also have some idea how seniority promotion systems work out from what happens in unionized school systems. Incompetent senior teachers get their choice of assignments and, thanks to union contract provisions, are almost never fired, while talented junior teachers are laid off.

It is no accident that the rate of unionization in the private sector has plummeted since its peak in the 1950s. Scholars have found that unionized firms are at a competitive disadvantage against non-union firms. Over the years, their workforce tends to shrink, while non-union firms grow.

Since the 1950s, private-sector employees have gained protections that only unions once provided through pensions laws like ERISA, anti-discrimination legislation and developing human relations law. We're a long way from the 1930s.

But the Obama Democrats want to take us back to a system that produced huge inefficiencies and rigidity in the private sector. Does that sound progressive?