Down in the Polls, Dems at War With Themselves 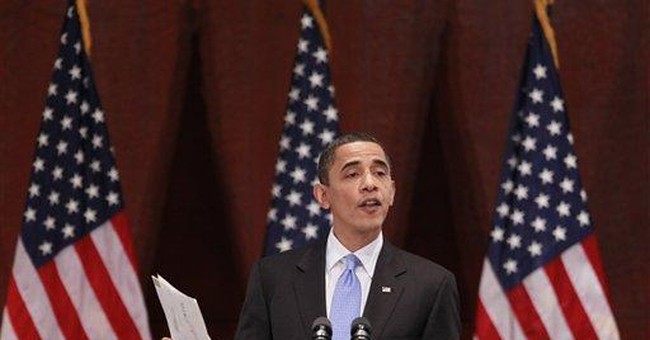 Intraparty civil war. It's a story line journalists often employ, though usually about only one party, the Republicans.

Thus when three-term Sen. Bob Bennett failed to get enough votes at the Utah Republican convention, we were told that he was the victim of a purge by right-wing activists, despite his largely conservative record.

That was a legitimate story, and I tend to agree that Bennett was a constructive member of Congress who will be missed. And there will be more of these stories as the years go on, as Tea Party activists challenge politicians they regard as establishment Republicans.

But the real civil war this year is going on in the Democratic Party -- and it is going largely unreported.

One reason is that it is not a clear-cut battle between two easily identifiable forces, like Robert E. Lee's Army of Northern Virginia and Ulysses S. Grant's Army of the Potomac. Rather, it resembles the guerrilla conflicts of the Civil War in Missouri, Arkansas and Oklahoma, with local self-starters scurrying about in all directions.

So in this month's primaries, we saw a skirmish between Arkansas Senate incumbent Blanche Lincoln and Lt. Gov. Bill Halter, who suggested but did not quite promise he'd support the card check bill that would effectively abolish the secret ballot in unionization elections -- and whose campaign received something like $1 million from unions. That race will be decided in the June 8 runoff.

Another incumbent challenged on the left was Utah Rep. Jim Matheson, who got only 55 percent in the Democrats' state convention and could lose the June 22 primary to a supporter of the health care bill.

Pennsylvania Democrats rejected party-switching Sen. Arlen Specter, supported by the Obama White House, in favor of Rep. Joseph Sestak, who has a longer record of supporting Obama policies -- but who after the primary declined to identify himself as an "Obama Democrat."

The Democrats' one big victory, in the Pennsylvania 12 special election, was won by a pro-gun, anti-abortion, anti-health care bill, anti-cap-and-trade candidate. That platform sounds more Republican than Democratic.

Their big defeat came in the Hawaii 1 special election, when the Democratic vote was split between supporters and opponents of the machine headed by Sen. Daniel Inouye, now in his 51st year as a member of Congress. Democratic factionalism may help Charles Djou hold onto the seat in the fall, in the one state that has never denied re-election to an incumbent member of Congress.

Intraparty civil war takes many forms. In Illinois, Rep. Jesse Jackson Jr. reportedly is ready to endorse Republican Senate nominee Mark Kirk over Democrat Alexi Giannoulias, whose family bank gave loans to mob-related individuals and then failed last month. In New York, Andrew Cuomo launched his gubernatorial bid with a platform that puts him on a collision course with Assembly Speaker Sheldon Silver and differs notably from the record of his father, Mario Cuomo, in his three terms as governor.

What we're seeing here are attempts to scramble out of trouble by members of a party whose big-government policies have proved, to their surprise, to be highly unpopular. Some move left, some move right, some just run around.

As Pennsylvania Rep. Kathy Dahlkemper says, "You have to be independent, no matter what." This from one of the "Stupak five," who delivered to Speaker Nancy Pelosi the critical votes to pass the Democrats' health care bill despite their previous promises to oppose a bill that funded abortions.

Democrats showed impressive party discipline in jamming cap-and-trade through the House in June and the health care bills in the House and Senate last winter. But that was then. Now the House Democrats are throwing up their hands on passing a budget resolution. Party stalwarts like Rep. Gerry Connolly of Northern Virginia aren't willing to cast a vote for the kind of deficits the Obama administration supports.

We've seen this sort of thing before. In 2006, House Republicans, staring at negative poll numbers, weren't able to pass a budget resolution, either. A once disciplined party was transformed into an incoherent rabble.