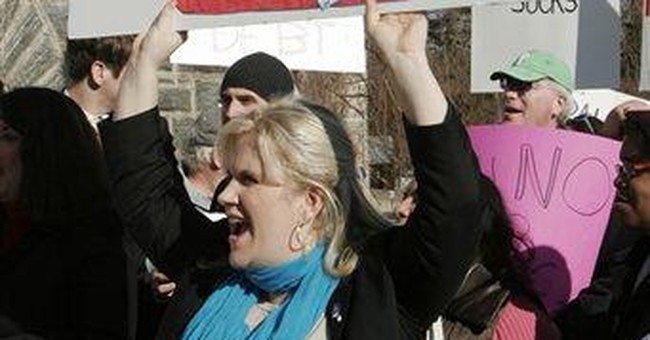 The political commentariat doesn't know what to make of those thousands of Americans who have spontaneously thronged to tea parties and town hall meetings to oppose the big government programs of the Obama administration and Democratic congressional leaders.

Some on the left attack them as fascists or racists, though evidence of that is sorely lacking. David Brooks in The New York Times compared them to the New Left campus radicals of the 1970s, which comes closer to reality but doesn't quite ring true.

Some tea partiers, citing the Declaration and the Constitution, compare themselves to the patriots of 1776 and the founders of 1787, which has some validity but seems overly self-congratulatory.

In terms of their immediate effect on conventional politics and their potential for continued influence, I think the tea partiers bear an uncanny resemblance to the antiwar activists in the Vietnam War period.

Like the tea partiers, the antiwar folk did not start off affiliated with one political party. They campaigned against an incumbent Democratic president and his political heir in 1968. Four years later, some supported Rep. Pete McCloskey's antiwar primary challenge to Richard Nixon. The tea partiers have plenty of corrosive things to say about the Republican politicians of the last decade, and at least some of them may support likeminded Democrats.

But if they stay involved, the tea partiers are likely to gravitate to the Republican Party, just as the antiwar folk gravitated to the Democratic Party, on which they had a long-lasting and pervasive effect.

Not all of that effect was positive. Antiwar Democrats beat hawks in primaries and then lost general elections to Republicans. The disarray of the 1968 Democratic national convention helped beat Hubert Humphrey, and the antiwar 1972 nominee George McGovern lost 49 states. Some antiwar folks voiced an anti-Americanism that turned off ordinary voters.

But antiwar Democrats supplied energy and impressive recruits to their party. Many Democrats who were motivated by dovish views and supported by dovish volunteers and contributors won breakthrough victories in 1974, enabling the party to hold congressional and legislative majorities for much of the next 20 years. And even as Democrats lost support from white Southerners and blue-collar men, their antiwar tendency helped them win support from affluent and culturally liberal suburbanites who now, despite Democrats' workingman rhetoric, form the dominant part of the party base.

You can see the intellectual influence of the antiwar people in the speeches of Democrats opposing the conflicts in the Gulf in 1991 and Iraq in 2002. Their arguments are a better fit for the facts of the Gulf of Tonkin incident of 1964 than for the facts on the ground in 1991 and 2002.

Like the antiwar activists of 40 years ago, the tea partiers include many good citizens moved to political involvement because of intellectually serious concerns about public policy. Similarly, they include a much smaller number of cranks, conspiracy theorists and congenital malcontents.

Tea partiers have caused some internal party splits (see the New York 23 special election), and some may launch primary challenges or third-party efforts that will elect Democrats. Any time a large number of motivated people inject themselves into electoral politics, they cause a certain amount of chaos.

They also add a lot of energy, political creativity and enthusiasm into a moribund and dejected political party, like the Democrats of 1968 and the Republicans of 2008. New people change the positions and focus of their parties. The Democrats before 1968 were a pro-Cold War party. Since 1968 they have been, with occasional exceptions, a dovish party. Hawks need not apply (ask Joe Lieberman).

The Republicans for the last two decades have been a party whose litmus tests have been cultural issues, especially abortion. The tea partiers have helped to change their focus to issues of government overreach and spending. That may be a helpful pivot, given the emergence of a Millennial generation uncomfortable with crusading cultural conservatism.

It's not clear whether the tea partiers' influence on Republicans will last as long as the antiwar cohort's imprint on Democrats. But their concern -- the fact that government spending is on a trajectory to increase far beyond revenues -- seems likely to persist. In which case a spontaneous movement that no one predicted and that no one person led could end up, again, reshaping one of our great political parties.

Trending Townhall Video
The Hispanic Voter Dam Is About to Break and Democrats Are Not Ready for It
Matt Vespa
Cori Bush Is Not Backing Away From Saying 'Defund the Police'
Julio Rosas
Columbus School Board Issues Objection to State's Resolution on Gender Identity
Madeline Leesman
Friendly Reminder: Raphael Warnock Is Still a Nasty Piece of Work
Matt Vespa