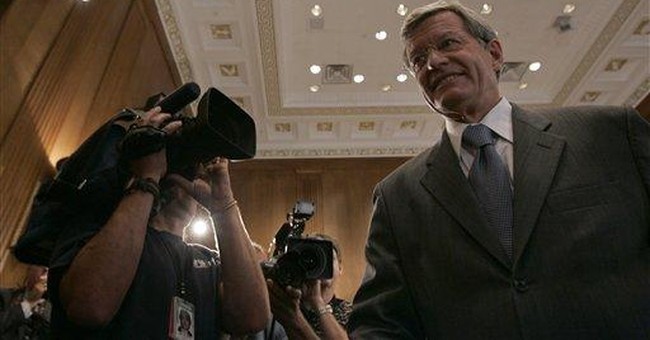 Who do you suppose said that? A Republican political operative? A Fox News political analyst? One of those several hundred thousand Tea Partiers who assembled in Washington on Sept. 12? No, it was Lawrence Summers, the director of Barack Obama's National Economic Council and, by common consent, one of the world's leading economists.

Summers made this gloomy forecast in the course of arguing that our economy is headed to "sustained recovery." And while it sounds like self-protective political rhetoric, it is also in line with the thinking of Democratic economists who bemoaned a "jobless recovery" during the first Bush term.

They argued then that a variety of factors -- big increases in the incomes of high earners, the crowding-out of wage increases by the fast-rising costs of health insurance -- prevented the rapid job growth that followed previous recessions. There was something to these arguments.

But it's also true that job creation accelerated in 2004 and kept going for another three years. Perhaps, although Democrats would not like to admit it, the Bush economic policies had something to do with that.

And perhaps the rather different policies of the Obama administration and the Democratic Congress may help Summers' gloomy predictions come true.

Tax policy is one example. The Bush tax cuts are scheduled to expire next year, and the Democratic Congress will surely allow income tax rates on high earners to go up to 39.6 percent again, or even more if it enacts the administration's proposed policy of limiting high earners' charitable deductions.

These increases will produce revenue that the government needs to reduce the enormous budget deficit, though surely not as much revenue as static economic models indicate. But they will also depress economic growth to some non-trivial extent, and thereby depress job creation.

Then there's trade protectionism. A week ago Friday, late at night, the Obama administration slapped import tariffs on Chinese tires. The Chinese retaliated by imposing tariffs on auto parts and chickens -- take that, United Auto Workers and Tyson Foods! Upshot: American consumers will pay more for tires, and auto-parts and chicken-processing jobs will be at risk.

And more of that may be in store. "The smell of trade war is suddenly in the air," writes The Wall Street Journal, and Global Trade Alert reports that 130 protectionist measures are ready to be implemented by countries around the world. Are we seeing a repeat of the job-destroying protectionism that followed the Smoot-Hawley tariff of 1930? It's starting to look like it.

Then there are the additional burdens on the private-sector economy that would be piled on by the congressional Democrats' health care bills and the cap-and-trade legislation passed by the House in June. In the job boom of the middle years of this decade, these policies looked like something we might be able to afford. They look less like that now.

Meanwhile, it's plain that consumers are not going to spend money anytime soon at the rates they did when their house prices were bubbling up and that the $787 billion stimulus package passed last February was not -- how to put this? -- optimally designed for job creation.

The Obama administration, along with the Federal Reserve, deserves credit for stabilizing financial markets. But administration policies have put us on the path to increasing the national debt from 40 percent to about 80 percent of gross domestic product -- a level we haven't seen since the years just after World War II. Interest rates are low now, but when they rise it's going to take an uncomfortably large chunk of federal revenues just to service this debt.

"After the health care debate ends, and whatever its outcome may be," writes William Galston, deputy domestic adviser in the Clinton White House, "the administration and congressional Democrats would be well advised to turn their attention back to the economy and ask themselves whether there is anything more to be done to jumpstart job creation."

Good advice, but why wait? The Office of Management and Budget now projects unemployment at 9.7 percent, the same as last month, in the fourth quarter of 2010, when the off-year elections take place. Maybe the administration and congressional Democrats should consider job-creating rather than job-destroying policies right now.