The Importance of Fallon's Fall 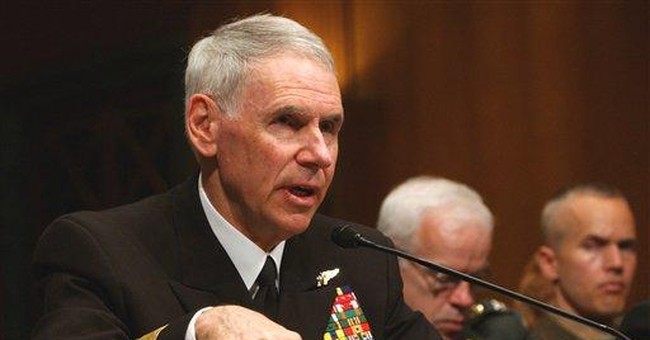 The abrupt resignation of Adm. William Fallon as the head of Central Command almost got lost amid the breaking news of Barack Obama's victory in the Mississippi primary and Eliot Spitzer's resignation as governor of New York. But it's a much more consequential development -- in the foreign and military policy of the Bush administration in its final year in office and in the relations between civilian commanders and military officers in the long run of American history.

Though everyone involved denies it, Fallon was kicked out for insubordination, or something very close to it. His conduct became impossible to overlook after the publication of a jauntily written article in Esquire by Thomas P.M. Barnett, author of "The Pentagon's New Map."

Barnett paints Fallon as a seasoned officer who coolly and wisely has been frustrating George W. Bush's desire to invade Iran. He points out that Fallon opposed the surge in Iraq ordered by Bush in January 2007 and that he has tried to rein in Gen. David Petraeus, whose leadership of the surge has produced such impressive results. He seems to take it for granted that readers will applaud Fallon for opposing a move that converted likely defeat to a high chance of success.

Fallon also made it plain that he wants to withdraw troops from Iraq, as soon as possible -- even though Defense Secretary Robert Gates has approved Petraeus' request for a pause after currently scheduled troop withdrawals end in July.

Fallon is not the first subordinate to work openly to undercut the commander in chief. The authors of the National Intelligence Estimate headlined a conclusion that Iran had abandoned part of its nuclear program, while underplaying the more important news that the mullahs were continuing the critical parts of the nuclear program and retained the capacity to rev up the rest quickly at any time. Leaks from the State Department and CIA have been clearly designed to frustrate administration policy.

Civilian and military, those who have been undercutting administration policy do so in the belief that their views are more in the nation's interests than the conclusion of the Texas cowboy whom the voters somehow elected president. State and CIA are filled with professionals educated in elite universities dominated by the left and, while not as wacky as their professors, have come away with the default assumption that liberals are always right. Many military officers, who increasingly have graduate degrees from such universities, seem to have imbibed similar habits of mind.

In addition, officers assigned to regional commands seem, like diplomats assigned to one area, inclined to go native. As head of Pacific Command, Fallon (at least as Barnett paints him) seemed transfixed on cooperating with China; at Central Command, he came to believe that pressuring Israel toward a settlement with Palestinians was the way to solve every problem in the region. After all, those are the things the Chinese and Arab military officers he's been interfacing with have told him.

In my view, George W. Bush has been unduly tolerant of the efforts of civilian career professionals to undercut his policies. But Fallon's abrupt resignation suggests that he and-or Gates decided that things had gone too far when a commanding military officer was lionized for opposing the president's policies in the pages of Esquire.

One of the firmest principles of American public life, established with great deliberateness by George Washington, is civilian control of the military. The vast majority of American military officers over our history have honored and cherished that principle. Fallon, as portrayed by Barnett, seemed to relish brushing it aside.

My guess is that Gates, who was a career professional and whose memoir stresses the continuity of U.S. government policy in different administrations, decided that enough was enough.

Tough questions remain about how civilian commanders should choose and interact with military professionals. Bush's record, in my view, has been far from ideal. He has seemed content with letting others choose military commanders and then accepting their advice with little of the abrasive interaction recommended by Eliot Cohen in his 2002 book "Supreme Command." Only after the debacle of the 2006 elections did he call on David Petraeus.

One wonders how much he pondered the installation at Central Command of Petraeus' critic Fallon. It is surely a difficult thing for civilian presidents to choose able and apt military commanders -- looking back in our history Franklin Roosevelt seems to have been the only commander in chief who had a consistent record of doing so early on. But at least Bush -- and Gates -- have rectified what they must now consider a mistake. And they have reaffirmed the ancient principle of civilian control.